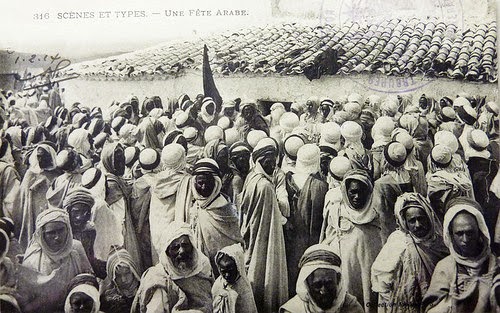 The exploration of skating's rich history has taken me down some pretty unexpected 'corridors' but perhaps few as unanticipated as this particular tale. Muslim people ice skating in the nineteenth century? Yes, you read that right.

John Moyer Heathcote's wonderful 1892 book "Skating - Figure Skating" shares the following story so unbelievable I had to read it three times to wrap my pretty little head around it: "On one occasion the sport aroused the enthusiasm of the natives of what is now part of the Chinese Empire. In the winter of 1873-74 and English officer attached to Sir Douglas Forsyth's mission to Yarkand crossed the Himalayas from Cashmere, and spent four months at Kashgar, a town north of Yarkand. A lake four miles in length adjoined his residence, and being the fortunate possessor of a pair of 'Acmes,' he was accustomed to indulge daily in his favourite amusement. The Turcomans, who are of the strictest sect of Mahomedans, and who are wont to envelop their nether limbs in roomy pantaloons, were at first disposed to regard the exposition of even the male human leg encased in close-fitting integuments with feelings akin to those of the sternest of metropolitan stage-censors; but the Ameer having evinced a keen interest in the sport, curiosity after a time overcame their scruples. On one occasion, when Sir Douglas Forsyth's party were paying a visit to the Governor of Kashgar, my friend skated on the reservoir in his grounds, an object of wonder and admiration, and a ringing cheer broke from the spectators, more than two thousand in number, when accepting a cup of tea he skated away with it, taking an occasional sip without checking his career. The Ameer, on hearing of this, was so pleased that he ordered seven pairs of skates to be made forthwith. The task was entrusted to the most skillful local mechanic, who supplied a very respectable skate with a wooden foot-stock and blade of the best procurable iron. Some young athletes were told off for instruction, one of whom, a mullah (priest), proved an intelligent pupil, and a credit to his instructor." Well, how about that? Bet you didn't see that one coming!

I am all about primary sources when available so as much as I admire the research in Heathcote's book, I turned to the "Autobiography and Reminiscences of Sir Douglas Forsyth, C.B., K.C.S.I., F.R.G.S." to see if Sir Douglas Forsyth himself made any mention of ice skating with the Mohamedan people and sure enough, he did. The diplomat wrote "The intensity of the winter, with a thermometer which for many weeks descended some degrees below zero, and frequently did not mount above freezing point in the sun, prevented us from moving about very freely, but it afforded us a good opportunity of showing to the astonished inhabitants the skill of some and the clumsiness
of others of our party in the science of skating. Our relations with our good friends the Kashgarians were of the pleasantest nature, unmoved by a single contretemps, and it is with pleasure and pride I record the fact that no single instance of altercation occurred between any of our followers and the people of the country."

In present day in the United Arab Emirates, skaters like Zahra Fadhel Lari have made headlines for figure skating in hijab in competition. Times are changing and figure skating just may be the universal language that in some way brings all citizens of our world together to enjoy the peace of cutting a beautiful edge... and it's heartening to think that skating brought just that very sense of harmony between two very different cultures back in the nineteenth century. As Bob Marley famously sang: "One love, one heart... Let's get together and feel alright..."

If you enjoyed reading, the best advice I can give you is to take just a moment of your time and click through to this blog's Facebook page at http://www.facebook.com/SkateGuard and "like it" - you'll end up with daily figure skating news, videos and interesting articles right in your Facebook news feed, as well as new content and interviews on this blog as they happen. I'm also just in love with the Twitter - it's so fun! You can also tweet me at http://twitter.com/SkateGuardBlog anytime you feel like talking about skating... that's what I'm here for!
Posted by Skate Guard Blog at March 13, 2015
Email ThisBlogThis!Share to TwitterShare to FacebookShare to Pinterest
Newer Post Older Post Home