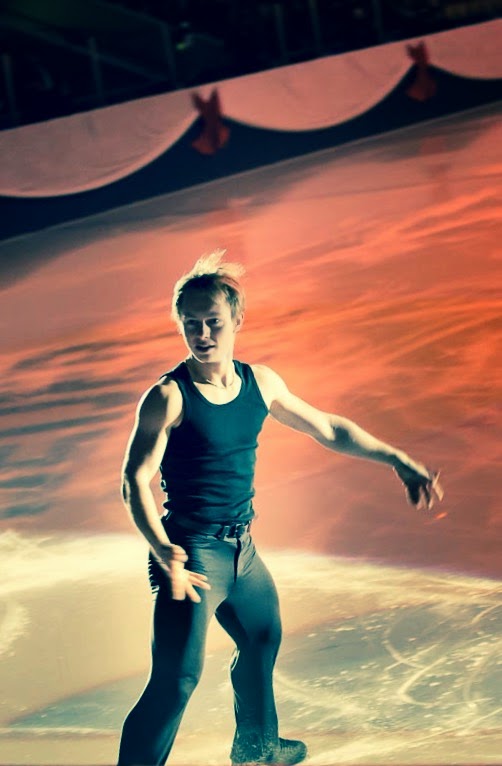 It goes without saying that the career of three time Swedish Champion Alexander Majorov has been an incredible one. He's a bronze medallist at the World Junior Championships and has won gold medals internationally at the NRW Trophy in Germany, Graz Ice Challenge, Warsaw Cup and Lombardia Trophy. However, as is a recurring theme in the stories of many elite skaters, injuries ranging from back problems to Achilles tendon injuries have almost robbed Majorov of it all. Rebounding to make it to his fifth World Championships in Shanghai where he finished twenty third, he looks towards a brighter future. We talked about the lessons skating has taught him and his philosophy on the sport, goals for next season, favourite skaters and much more... and I think you'll love reading this short but sweet interview:

Q: You've had some incredible accomplishments so far in your career. You're a three time Swedish Champion and four time Nordic Champion, represented Sweden at the Sochi Olympics and you won the World Junior bronze medal in 2011. Looking back at your career so far, which moments have been the most special to you?

A: I'd have to say that the most special moments have been the Junior World Championships where I took third place, the short program at the Olympic Games and the European Championships in Zagreb in 2013.

Q: My understanding is that you were born in St. Petersburg. How did you come to represent Sweden in the first place and how do you think your career would have been different if you'd represented Russia?

A: I was almost born in Sweden and I have lived here for my whole life. Competing for Sweden was a normal choice because I was a Swedish citizen. I like Russia, but I never planned to compete for the country.

Q: What would you say was the most important thing you learned recently when it comes to skating?

A: I think to never give up on your dreams. I have had a hard time with injuries since the summer of 2014. It took me seven months to come back. I thought my career was over but then I suddenly started to compete again. My first competition coming back was the European Championships in 2015.

Q: Looking forward to the next season, what are your main goals in training and what can you share about your new programs and plans for next year?

A: My main goals are to recover fully from my injury and to be able to do the quad toe-loop again. I will keep my free program and change my short. I can say that the short program will be fun music: a totally different style with some lyrics in the music.

Q: If you weren't a singles skater and had to be a pairs or ice dancer, which would you pick and who would be your ultimate partner?

A: Oh, that was a tricky one. I would say pairs. I'm not so tall, so I would have to pick a small partner. Maybe Julia Lipnitskaia.

A: Kurt Browning, because of the amazing skating skills he has. He makes figure skating interesting even for people who don't like the sport. Also Evgeni Plushenko, because he has the most amazing jumping stability in the whole world.

Q: If you could be any animal on a carousel, what would you be, and why?

A: Maybe a dog, because dogs are lovely animals with huge hearts.

A: I can tell you a couple of facts that most people do not know. I speak three languages fluently: Swedish, Russian and English. I also understand German. I can speak it a little, but not fluent like the other languages. I really enjoy to drive road bike bicycles in the summers in my town, I see it as meditation on wheels. I play acoustic guitar a bit. I'm not a pro... but it works. I'm studying to be a physical therapist in university on the side of skating. I have been studying for four years and next summer I will have my Bachelor exam. I think that is the right name for the exam?

Q: What is your philosophy towards your skating?

A: To try new and special things in skating even if people don't like it. For example, when I'm changing skating styles or using costumes that are totally different from others.

Didn't you just LOVE this interview with Alexander? Well, don't just stand there! In order for this blog to reach a wider audience, I could sure use a little help. All you have to do is "LIKE" the blog's Facebook page at http://www.facebook.com/SkateGuard for instant access to all of the new blog articles, features and interviews as they are made available. I also share daily updates and headlines from the skating world, videos and much more that's not here on the blog, so if you love figure skating as much I do, it would really be rude not to get on that inside edge! You can also follow all of the fun along on Twitter at http://twitter.com/SkateGuardBlog. If you know someone who loves skating, tell them! It's all about getting a dialogue going on! Fabulous skating is too fabulous to keep secret.
Posted by Skate Guard Blog at April 29, 2015
Email ThisBlogThis!Share to TwitterShare to FacebookShare to Pinterest
Newer Post Older Post Home