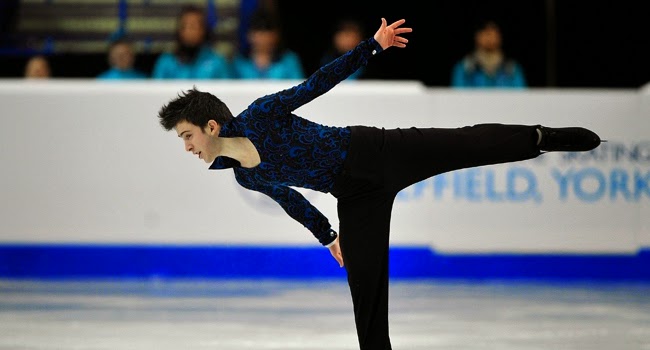 Following in the figure eights of Tugba Karademir, the skater who really helped put Turkey on the map as a 'figure skating nation', twenty four year old Ali Demirboğa has been making his very own name in the sport/art with impressive performances in international competitions for the last ten years, including multiple trips to the European and World Championships. This Turkish Champion took the time to share his story with me in this recent interview, talking about everything from the unique challenges his country faces in developing skaters to the ups and downs of his career, competing against his idol, his favourite skaters and much more. You're bound to enjoy this one!: Q: You have won the Turkish National title five times and represented your country internationally at four European Championships, two World Championships as well as at over twenty international competitions. Looking at your skating career so far, what are your proudest moments or most special memories?

A: When I was first national champion in 2010, I realized that I had the chance to go to the European Championships. I said "Oh my God! I'm going to watch Evgeni Plushenko live!" Unfortunately, our federation decided not to take me to the Europeans that year because I wasn't experienced enough. I was very sad and I thought I would never be able to watch him live. Two years later at the 2012 Europeans in Sheffield, I was going to compete and when I heard that Plushenko was ALSO competing I was head over heels, I couldn't believe it. At the competition, I made it past the preliminary round with a free skating score of 93.99 and I earned the right to compete for short program. This is where my highlight of the story began. As we drew our assignments for the short program it turned out that I was going to be in the same warm-up group with Evgeni. When I was skating, he stood at the side of the ice since he was next. I couldn't even skate. It was very overwhelming. He was clapping for me and he was watching me. It was a unbelievable moment for me. 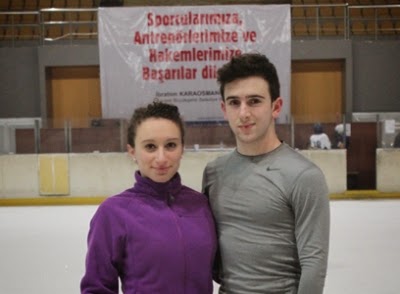 Q: Turkey is a relatively new player on the international figure skating 'scene'. What are training conditions like in Kocaeli and elsewhere in Turkey and how much competition do you face from other men's skaters in your own country?

A: Turkey's conditions getting better every year. We had only two Olympic size ice rinks five years ago but there are seven right now. There will be twelve to thirteen ice rinks in a few years. We still have a lot of losses but I believe that Turkey going be a top ten country in figure skating in the next ten years. We now have four or five strong competitors at Nationals every year.

Q: You're coached by Rana Belkis Gocmen but you've also done some training at Alexei Mishin's summer camps. What makes Alexei Mishin such a respected coach and what makes your own coach the best person for you to be working with?

A: Alexei Mishin means experience, quality, perfect technical style and discipline. To be short, he is almost everything for figure skating. I first learned how to skate with Rana Gocmen in 1999 so that has meant we have been together for sixteen years. When I started skating, I was a young skater
and she was a young coach. Sometimes we both learned things together and now she is one of the best coaches in all of Turkey. She is perfect!

Q: What are your ultimate goals in figure skating and will you continue to train towards the PyeongChang 2018 Olympics?

A: Yes, I will continue until 2018 and I am going to try to make it to the Olympics. The PyeongChang 2018 Olympics have always been my ultimate goal as a figure skater. Hopefully I can go.

Q: What do you see as your strengths and weaknesses as a skater and a person?

A: As a figure skater, my strengths would have to be my ability to deal with the mental preparation and performance involved in the sport. İ have a tendency to rush in to my jumps while performing my programs and this is definitely my weakness and something I need to better prepare for. As an individual, I can be emotional in my decision making and life in general. I find this to be my weakness. My strength is definitely my personality and character.

A: My favourites are first of all Evgeni Plushenko because he is a legend. Four Olympic medals is incredible. He is the best jumper I have ever seen and so creative. My second favourite would be Daisuke Takahashi because his skating skills and abilities are amazing. His choreography is pleasant and he becomes tremendous as soon he gets on the ice. Third would be Patrick Chan. He is probably the best combination of the technical side and the movement.

A: İ guess there is nothing that people don't know about me. I love to live with everything in full view.

Q: What do you love about figure skating more than anything else?

A: I am always saying that figure skating isn't my favourite sport. Actually, I love to play soccer. Until I was fourteen years of age, I skated and played soccer at the time. I quit soccer and focused on skating because it was clear to me that there was something different that was keeping me focused on figure skating instead of soccer or other sports. This is the only sport that I can present myself with the music.

Didn't you just LOVE this interview with Ali? Well, don't just stand there! In order for this blog to reach a wider audience, I could sure use a little help. All you have to do is "LIKE" the blog's Facebook page at http://www.facebook.com/SkateGuard for instant access to all of the new blog articles, features and interviews as they are made available. I also share daily updates and headlines from the skating world, videos and much more that's not here on the blog, so if you love figure skating as much I do, it would really be rude not to get on that inside edge! You can also follow all of the fun along on Twitter at http://twitter.com/SkateGuardBlog. If you know someone who loves skating, tell them! It's all about getting a dialogue going on! Fabulous skating is too fabulous to keep secret.
Posted by Skate Guard Blog at April 14, 2015
Email ThisBlogThis!Share to TwitterShare to FacebookShare to Pinterest
Newer Post Older Post Home