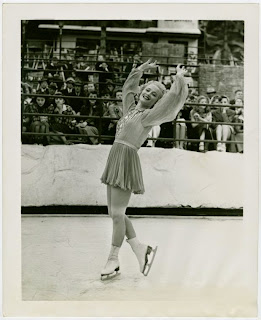 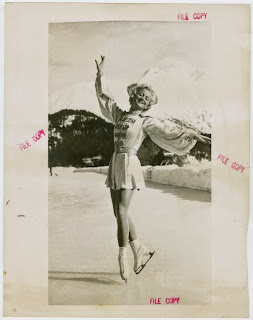 Three time Olympic Gold Medallist Sonja Henie's story is one of the most documented in all of figure skating history; it has been the subject of documentaries, books and endless fascination. However the tale of Erna Andersen, a fellow Norwegian skater from Sonja's era followed the same trajectory so closely that the parallels are almost eerie.

Born in 1915 (three years after Sonja), Erna Andersen was an architect's daughter who learned to skate at the age of five. She trained alongside Sonja Henie at the Oslo Skating Club. She won her first junior competition at the age of twelve. In addition to her skill as skater, she was also an accomplished skier. The September 3, 1939 issue of The Brooklyn Daily Eagle recalled that Andersen "was a sturdily-built little girl with unusually supple and graceful muscles and she learned fast. By the time she was 15 she was winning figure skating and skiing contests all over Norway and three years later she was the first and (to this time) only girl, who ever skied behind a flying airplane. She did this on Lake Landesen by holding on to a rope tied to a plane while it circled the lake four times. 'The airrrrplane,' says Erna, 'got so high vunce it almost took me up into the air also.' It's a good stunt to think about, she adds, but she's not particularly anxious to try it again." 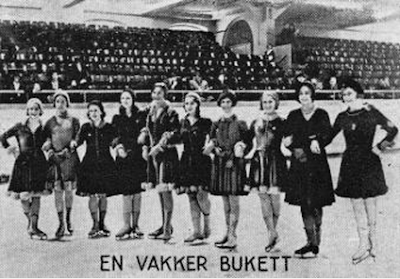 As amateur skaters, Henie and Andersen would share the same coach (1920 Olympic Bronze Medallist Martin Stixrud) but Andersen was unable to duplicate her club mate's success. After winning five Norwegian titles from 1925 to 1929, Henie focused her attention on the international outings only and left the battle up to the other Norwegian ladies skaters at the National Championships. For five consecutive years, Andersen won the silver medal at Nationals but unlike Susan Lucci years later at the Emmy's just couldn't translate it all into an eventual win. Although never competing at the European Championships, Andersen DID compete at two World Championships. In 1933 in Stockholm, she finished a distant last to Henie's first but the next year in front of a hometown crowd in Oslo finished tenth of thirteen skaters. Like her competitor Liselotte Landbeck of Austria, Andersen also tried her hand at speed skating while still competing as a figure skater, winning a silver medal in Oslo in 1932 in Norway's national speed skating championships for women. She competed in five hundred, one thousand and one thousand, five hundred meter races to accomplish this feat.

When her competitive career ended, Andersen attended college and started making a name for herself in professional shows in Great Britain. While in England, Andersen also coached skating at the Empire Pool (Wembley Arena) in London. Her performances in England were described by a London correspondent in the March 5, 1936 Sydney Morning Herald: "She is a marvel of lightness and grace, and seems at times not to be on ice, but on air, and the rhythmic rapidity of her movements is incredible." Like Henie, who too skated on the silver screen, Andersen appeared in a skating film in England. The March 30, 1940 edition of The Ottawa Journal posits "six years ago, when skating was at the height of its popularity in Britain, Miss Andersen appeared in the first British skating film." 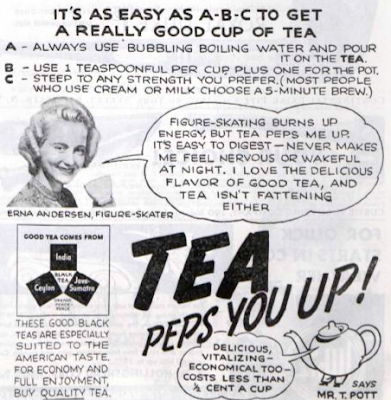 In 1938, she came to the New York and quickly made a splash. She was touted by newspapers and journals alike as being every bit as exciting as Henie. The Brooklyn Daily Eagle explained that "she came over on a visit and had no idea she'd be doing any ice skating here. But she couldn't keep away from the ice. It wasn't four days after landing that she sought out the rink at Madison Square Garden to try a few spins. Robert J. Sipchen, builder and owner of Sun Valley Village, at the Garden at the time, saw her executing difficult turns and pivots. Then and there, he signed her for his Sun Valley show. Erna recently introduced a new number, her own interpretation of the Merry Widow Waltz on skates. Crown Prince Olav of Norway came to Sun Valley to see Erna when he visited the fair."

Audiences loved her in the Sun Valley exhibit at the New York World's Fair. A June 16, 1939 Alice Hughes article in The Reading Eagle noted that "while the great Henie practiced all day, the little Andersen went to school. 'Mamma thought skating was something for out of school hours,' the girl says. Thus Sonja got the hop on her, and was a champ while Erna was still hard at her practice. But Erna has caught up... She is a blonde flash of beauty on the tiny rink at the Sun Valley show. How she can skate - on a hunk of ice that looks no bigger than a party tablecloth!... A lovely flame in poetry when Erna darts on the rink."

Andersen wasn't just popular, she was also apparently really, really good. A December 1940 LIFE Magazine article applauded Andersen's skating skill: "Erna Andersen's high jinks on ice are notable because they combine grace with speed. Most skating stars are either fast or graceful. Erna uses interpretive ballet technique with skating speed, easily performs leaps." She popped up in a variety of club carnivals in both the U.S. and Canada including the Minto Follies in Ottawa, a County Fair in Pennsylvania and was even the head of a Civic Night Parade. She was also particularly complimentary towards North American skaters stating that "the standard of skating on this continent is higher than in any other country in the world."

So we already know they were both blonde Norwegian skaters who grew up with the same coach in the same club, competed against each other, both appeared in skating movies and both came to the U.S. and became overnight sensations. Now, get this one. Paula Pyzik's 2004 "Notable Sports Figures" biography of Sonja Henie noted that "another measure of her worth is that in 1940 her legs were insured by Lloyds of London for $5,000 per week." If you want to believe the the Sunday, February 11, 1940 issue of the Brooklyn Daily Eagle's claim that Erna Andersen's legs too "were once insured for fifty thousand dollars", go ahead. I'm not sure how I feel about that particular claim. Genuine maybe, but one-up-manship perhaps? That said, Andersen's legs WERE apparently award winning. The Brooklyn Daily Eagle explained that Andersen was "selected by a committee of famous illustrators as the possessor of the 'Legs of Tomorrow.'" The committee apparently consisted of James Montgomery Flagg, Dean Cornwell, John LaGatta and Arthur William Brown. Andersen's legs were described by Flagg as "the most beautiful legs I've ever seen. Better even than Marlene Dietrich." Andersen WAS featured prominently fashion advertisements for Munsingwear Foundettes undergarments. Perhaps it's possible that someone just had a bit of crush. Who knows?

That's where Erna Andersen's story seems to fade away into the annals of figure skating history. What happened to her after coming to America and wowing audiences as the next great Sonja Henie isn't something I have the answer to... but I do know that the parallels between her and Sonja Henie's lives up until that point are uncanny. Described in many accounts as having a larger than life personality much like Sonja, one can only hazard a guess that whatever road she skated in life she continued to make every bit as grand an impression.

Bet you are wondering what comes next on the blog? MORE interviews, MORE skating history, MORE interesting articles for you to read, that's what! Stay tuned to the blog's Facebook page at http://www.facebook.com/SkateGuard and my Twitter feed at http://www.twitter.com/ohh_N and thanks as always for your support and most importantly... spreading the word!
Posted by Skate Guard Blog at June 18, 2015
Email ThisBlogThis!Share to TwitterShare to FacebookShare to Pinterest
Newer Post Older Post Home