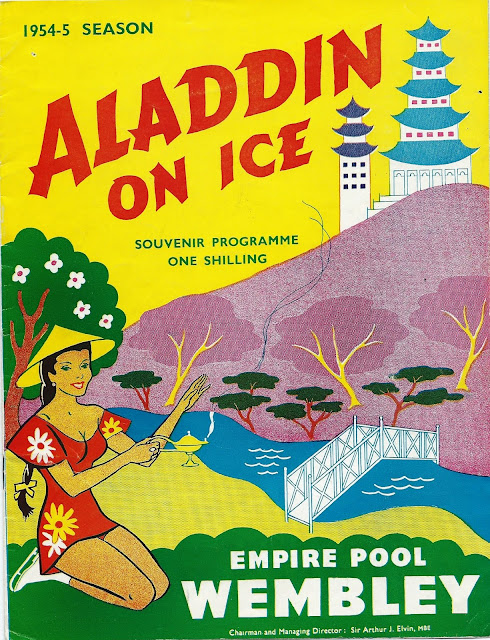 When World War II ended, the one thing the world needed was to smile a little. Legendary producer Tom Arnold - no, not the one that married Roseanne Barr, a different Tom Arnold - had just the answer for that. Arnold was known as The King Of Pantomime and had produced everything from classical plays to films, revues, operas, rodeos, circuses and variety productions. He knew what he was doing. When the war ended, Arnold took over The Sports Stadium, which was an ice rink built in a facility that used to be a popular swimming pool (the S.S. Brighton) in (you guessed it) Brighton. With co-producer Gerald Palmer and managing director Benny Lee, Arnold would produce some of the most lavish and popular ice pantomimes that England has ever seen. 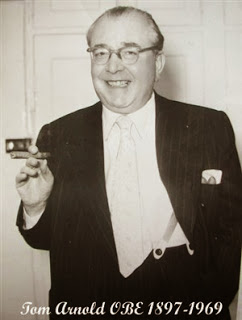 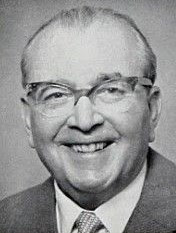 Tom Arnold's shows featured brassy, theatrical costumes and he offered contracts to many of the greatest professional skating stars of the era. His first show debuted in the summer of 1945 and was known as "Hot Ice". It starred Armand Perren, Len Stewart and Sheila Hamilton. Even with the popularity of summer ice shows in places like Sun Valley today, they are still a novelty and imagine how novel an idea ice shows in the summer would have been to post-war Britons! 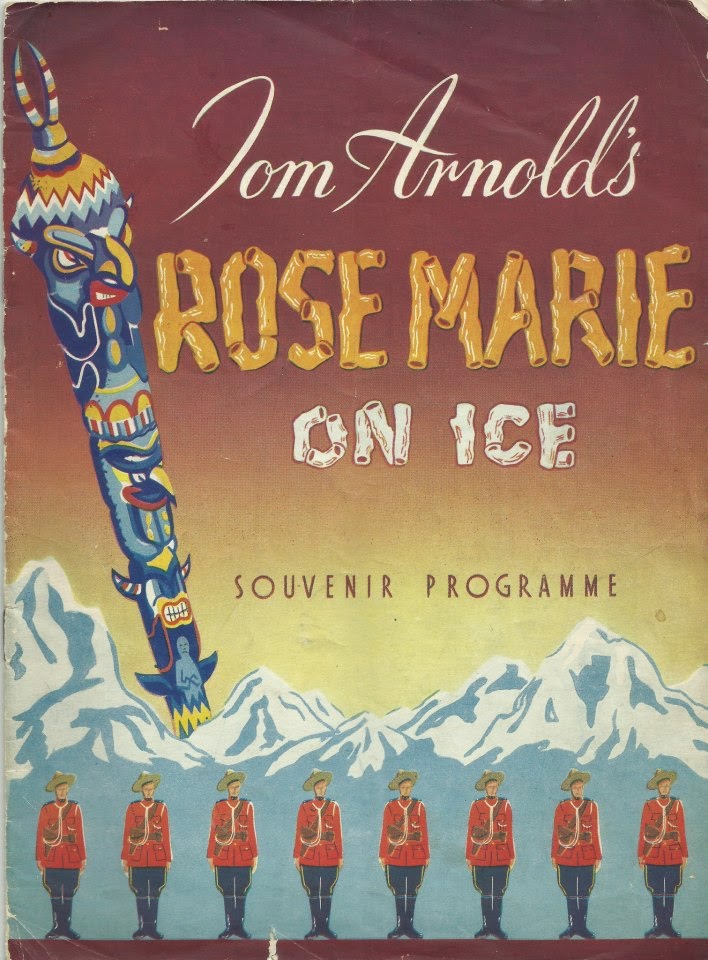 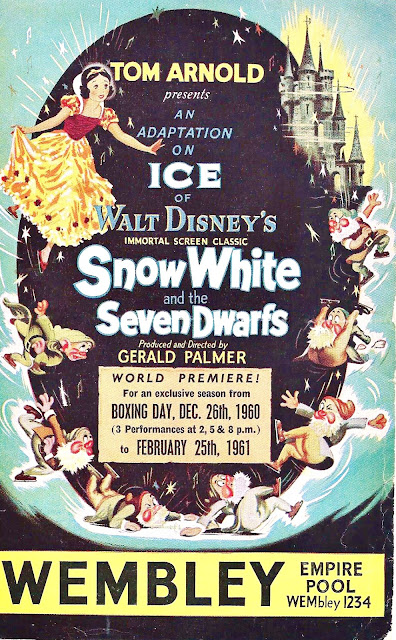 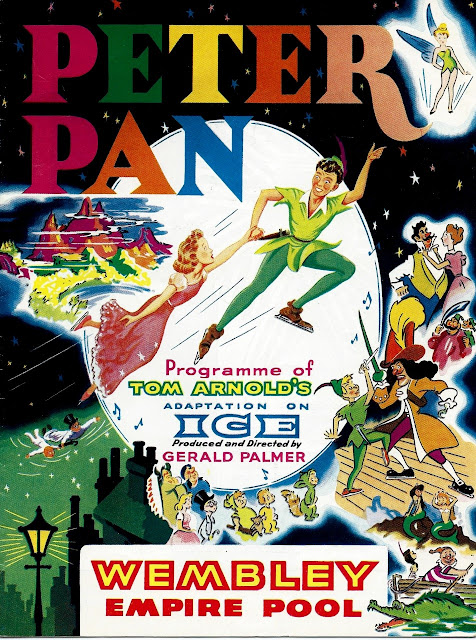 Starting in 1951, Arnold presented seven summer ice circuses. His acts included figure skaters, sea lions, comedians, equilibrists, trapeze artists and clowns. According to Trevor Chepstow's 2006 article "The King Of Pantomime" from My Brighton And Hove, "in one of the shows, a bear owned by Elizabeth Vogelbein the trainer bounded across the ice and leapt amongst the audience. Chased by Vogelbein and various members of the staff, the bear ran up and down the gangways before finally running into the orchestra area, from where he ambled quietly back into his cage!" Oh GOOD. Apparently the Russian ice circus producers in Russia we looked at in A Skating Safari: Bears On Ice, The Swan Lake, Flying Camels And More Than A Few Asses learned nothing from Vogelbein's folly. 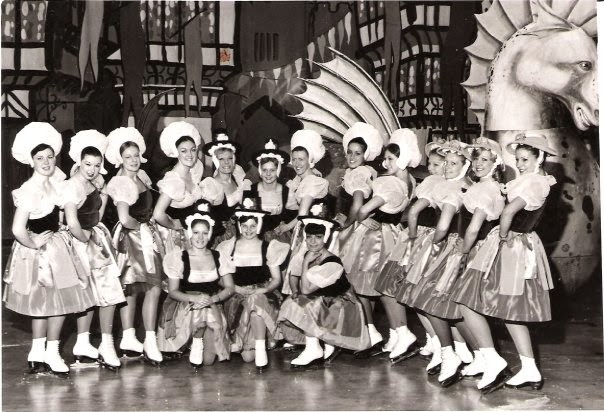 With the success of his ice pantomimes and circuses, Arnold brought his shows on the road to continental Europe and even to South Africa. Sadly though, it was the end of an era for Arnold's popular ice shows. In 1958, The Stoll Theatre was purchased by a developer and the iconic performance space that survived TWO World Wars would be demolished in favor of an office block in 1958. That same year, The Harringay Arena closed. In 1965, The Sports Stadium too was sadly demolished. It's incredibly sad to think that the settings of so many great ice shows that attracted whopping audiences don't even exist anymore. 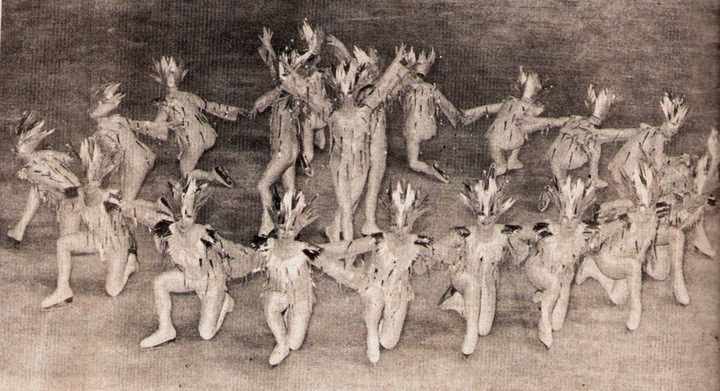 Between his stage and ice pantomimes, Arnold claimed to have produced more than four hundred productions in his lifetime and judging by the research I did in putting this little blurb together, it wouldn't surprise me! I kept running into more shows, more shows, more shows... It was really incredible. Arnold was honored as a member of The Order Of The British Empire and passed away on February 2, 1969, the day after Tim Wood and Janet Lynn won U.S. titles across the pond. After Arnold's death, his business partner Palmer kept the dream alive for a time, continuing to produce ice pantomimes choreographed by Australian Reg Park at Wembley Arena.

Skate Guard is a blog dedicated to preserving the rich, colourful and fascinating history of figure skating and archives hundreds of compelling features and interviews in a searchable format for readers worldwide. Though there never has been nor will there be a charge for access to these resources, you taking the time to 'like' on the blog's Facebook page at http://www.facebook.com/SkateGuard would be so very much appreciated. Already 'liking'? Consider sharing this feature for others via social media. It would make all the difference in the blog reaching a wider audience. Have a question or comment regarding anything you have read here or have a suggestion for a topic related figure skating history you would like to see covered? I'd love to hear from you! Learn the many ways you can reach out at http://skateguard1.blogspot.ca/p/contact.html.
Posted by Skate Guard Blog at June 10, 2015
Email ThisBlogThis!Share to TwitterShare to FacebookShare to Pinterest
Newer Post Older Post Home