Out Of Africa: Adventures In African Skating History 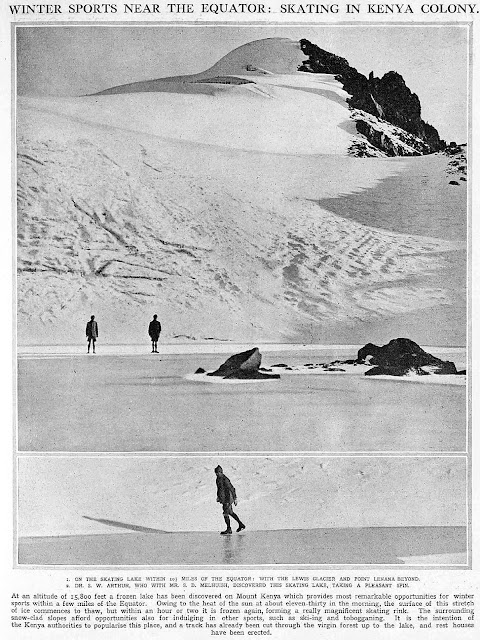 Back in October 2013, I wrote Winter Sports Without The Winter: Skating In Africa and touched a little on the development of skating in South Africa and Morocco as well as pointed out several other countries where skating programs and rinks have slowly been starting to crop up. Today, I want to celebrate the colourful and unusual skating history of the continent and let me tell you... I think you are going to have your jaw on the floor for much of this. Get your safari hats, binoculars and skate bags ready... things are about to get very interesting!:

The landlocked country of Lesotho lies in Africa's southern climbs and is completely surrounded by South Africa. Owing to its altitude in most areas, temperatures in winter can actually reach as low as minus seven to minus eighteen Celsius and snow and ice really aren't uncommon sights in the highlands year round. It's really no surprise that skating caught on in the small country and sadly, when a particularly bitter winter storm moved in on July 10, 1988, three young skaters skating on a lake near the country's capital, Maseru, perished when the ice broke and they fell through in a tragedy that mirrored The Regent's Park Tragedy in London on a much smaller scale. An older man also froze to death in Linakeneng, a town in the northeastern Mokhotlong highlands during the storm. This late eighties calamity served as a reminder that the omnipresent danger of outdoor skating is every bit as real in Africa as it is in the rest of the world. 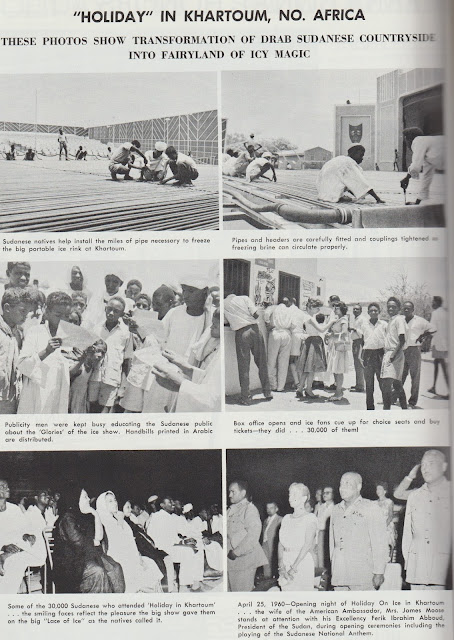 In 1960, the iconic skating tour Holiday On Ice for the first time decided to take on an extensive tour of the African continent. The cast included sixty Americans who were permitted to participate as part of the U.S. State Department's cultural exchange program. The first half of the tour started in Khartoum, the capital city of the Republic Of Sudan and travelled through Ethiopia, Kenya and Tanzania through to Mozambique. After a Christmas break where they were permitted to return home, skaters returned to the continent for shows in South Africa and The Congo. A December 3, 1960 article in The Miami News explained that "the African company carries its own ice-making equipment with it into the back-country on railroad cars." Although probably considered incredibly politically incorrect by 'today's standards', tour producer Morris Chalfen remarked "You get a helluva reaction from the natives, once you get them to come. They don't know at first what you're talking about. In Nairobi, they didn't even have a word for skate. We finally called it 'knife-on-show.'" 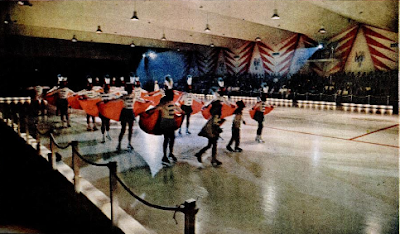 The first President of Côte d'Ivoire (Ivory Coast), Félix Houphouët-Boigny, played such a significant role in the decolonization of Africa and was so beloved by citizens that during his thirty three year tenure as the country's leader that they referred to him as Papa Houphouët. It was really no surprise when he got the crazy idea in 1970 to have an ice rink built in the Western African city of Abidjan that they flocked in to see what all the fuss was about and get their skate on for the first time. The rink was in a hotel called The Ivoire and an October 8, 1970 article in the Reading Eagle pointed out that "a painful one-point landing suffered by one young Ivoirian miss on the new ice rink in the presence of President Felix Houphouet-Boigny suggests it may never become the Ivory Coast's favorite rink." The Ivoire did manage to keep the rink (the only one in Western Africa) operational until the nineties, when the economic crisis hit the hotel hard and the skating rink wasn't able to subsist on the dwindling business from mostly the children of European expatriates. That 1970 reporter may have been right but who knows? Maybe one day skating will make another comeback in Côte d'Ivoire. Time will tell. 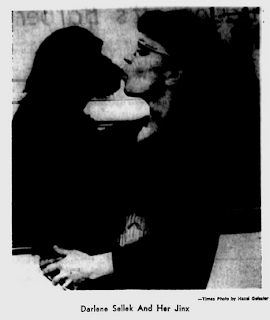 A lot of the details of how Jinx - or Spanky - came to North America are sketchy at best but we do know that he was according to owner Dave Pitt "orphaned in the jungles of Equatorial Africa". The ape first showed up as a novelty in a skating show in The Sands in Las Vegas under the name of Jinx and went on to perform multiple shows a day with four female skaters at the Manhattan Savings bank in New York in December 1960 as part of a Christmas ice show installed in the lobby. A December 18, 1960 article in the Palm Beach Daily News describes the rather hairy skater as keeping "a cranky eye open to see how his audience reacts to his act. He breezily jumps hurdles, walks on stilts, cuts up the ice in a dizzy spin, does a couple of leisurely backflips, and in an unusually show off mood, manages a wobbly figure-8. That bit of exertion over, Jinx refreshes himself by lapping up some of the cool ice water at his feet then looks up expectantly at his audience. If applause is not immediately forthcoming Jinx remedies that by leading the ovation himself." Two years later, professional skater Dave Pitt bought eleven year old Jinx from his then owner and trainer Darlene Selleck at a Las Vegas gambling casino for one thousand, five hundred dollars, renamed him Spanky The World Champion Ice Skating Chimp - no, there wasn't really a competition - and together they joined the cast of Ice Capades. Together, Pitt and his African born friend made waves in Colombia, South America, where according to an August 7, 1962 article in the Schenectady Gazette, "officials recorded his speed at 32 miles per hour... Later that night, Spanky made a tremendous leap, powering his 81-pound frame through the air to a distance of 10 and a half feet." However inhumane training animals to ice skate might be considered today, this American import from Africa certainly made his mark.

Another African immigrant to America with two names - her birth name Norma Vorster and adopted name Norma Foster - made quite an impact both in skating circles and the animal kingdom. After winning a gold medal at South African Figure Skating Championships and the 1956 Miss South Africa title, Foster represented her country at the Miss Universe pageant, took up Latin American ballroom dancing and acted in three films before moving to the U.S. in 1967. However, in the seventies, the former skater returned to her old stomping grounds in South Africa to host what else but a Jane Goodall-inspired show called "Wildlife In Crisis". Twenty six episodes of the show aired in Canada and the U.S. in the seventies. In a July 31, 1976 article in The Morning Record, the skater explained that "there is a good deal of deception being handed to the public in many wildlife series. Man is not as beastly and ruthless in regard to wildlife as some would have you believe... We concentrate on the enormous human effort that is being exerted on behalf of wildlife. Most wildlife shows present animals supposedly in their natural environment and how they behave. But in actuality this is a complete fallacy. It doesn't exist in Africa, most of these shots are staged. Africa has seen enormous encroachment by man in recent years, so what is really important is not going for animals in this so-called 'natural' environment, but showing the enormous problems the continent is having with wildlife management."  It's a shame that this African skater wasn't able to save Jinx - or Spanky - from exploitation in North America. She was only about a decade and a half too late.

Skate Guard is a blog dedicated to preserving the rich, colourful and fascinating history of figure skating and archives hundreds of compelling features and interviews in a searchable format for readers worldwide. Though there never has been nor will there be a charge for access to these resources, you taking the time to 'like' on the blog's Facebook page at http://www.facebook.com/SkateGuard would be so very much appreciated. Already 'liking'? Consider sharing this feature for others via social media. It would make all the difference in the blog reaching a wider audience. Have a question or comment regarding anything you have read here or have a suggestion for a topic related to figure skating history you would like to see covered? I'd love to hear from you! Learn the many ways you can reach out at http://skateguard1.blogspot.ca/p/contact.html.
Posted by Skate Guard Blog at July 24, 2015
Email ThisBlogThis!Share to TwitterShare to FacebookShare to Pinterest
Newer Post Older Post Home