How The Short Program Was Invented 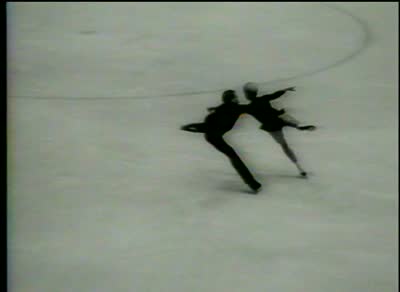 Inspiration can come from the most unexpected places. When Marian Scott called me up to talk Canadian figure skating history for a September article in the Montreal Gazette, she introduced me to the untold story of her son's former skating coach which led me on an almost Indiana Jones like path  to uncover a completely untold part of figure skating history. Enter eighty six year old Karel Vosátka, a Montreal skating coach who - with partner Blažena Knittlová - won the silver medal at the European Figure Skating Championships back in 1948 in his home country of Czechoslovakia.

At Marian's suggestion, I called Mr. Vosátka. He affirmed what she told me was true... that it was indeed he who invented the short program. He was gracious enough to mail me three precious documents that reveal the story in great detail - the ISU's Communication No. 350, a photocopy of his original ISU proposal and a written memoir from July 5, 1994 called "Idea, Born From Rage" where he shared the entire story. Let's rev up the time machine and learn how the short program was developed from the inventor himself:

"Till 1963 presented all figure skating pairs only one single, 5 minutes long, free programme to judges. Not even the slightest mistake, but essentially the starting order with number '1' signified word for word - disaster.

I felt personally this 'pleasure' and starting number '1' was over fifteen years my predestined companion. Ladies, men or dance competitions was another story: after prescribed figures or dances, the free style represented the second entry on the ice, second introduction to judges, shortly: the second chance. Thereby not only the performance, but more favourable starting order helped often to better result!

Chatting, by a lucky hit, with Ernest Labin (at that time the president of the ISU) in Bucharest, where he passed on business, I opened my heart to this likeable Austrian explaining him, what a disadvantage have pairs face to soloists and dancers. 'Well, you put something reasonable together and I try to push it through!' was his laconic answer.

Two weeks later I posted to Vienna an elaboration of two and half minutes 'SHORT FREE' (how I called it myself, using the half time of 5 minutes pair free) with obligatory elements, connected in free order, following the music chosen by pair. This programme included all typical pair skating elements: lifts, pair spins, death spirals as well as solo elements: jumps, spins and footworks. Results of 'Short free' will help to draw starting order for presentation of 'Long free' - in brief: the same principle as after obligatory figures in solo skating.

Congress 1965 incorporated definitively the SHORT PROGRAMME FOR PAIRS to figure skating rules. New era of pair skating has shown later the way to soloists. Tireless defender of freestyle and my good friend since 1940 Dr. Dědič (alias Pepik) crowned this effort in 1971 in Venice: The SHORT PROGRAMME was finally accepted along for figure skating of ladies and men.

There is no mention of the origin of SHORT PROGRAMME in Dědič's book 'WORLD SPINS'. Just short notice... 'on elaboration of this revolutionary change took part Czech coach...' For me remained as satisfaction the sincere excuse of my friend... in 1979 in Springfield, USA: 'Sorry Karel, no way to mention your name. My book couldn't so came out...!' It was time of Communist censorship and I emigrated in 1969 to West. Using the expression of former TV-commentator, I was 'ungrateful dissenter'. But all that is a long time ago..."

HOW THE SHORT PROGRAM CAME TO BE

After meeting with Labin and submitting his six page proposal, entitled "Vorschlag des 'Paarläufer - Pflichtprogrammes'" in German, for consideration, Mr. Vosátka waited in anticipation while ISU delegates met at the Hotel Marxi in Helsinki, Finland in early June 1963. Sonia Bianchetti Garbato was one of those present. In her book, "Cracked Ice: Figure Skating's Inner World" (recently reviewed on Claire Cloutier's excellent blog A Divine Sport), Bianchetti Garbato explained "In 1963 [at the ISU Congress], only 20 Members [i.e., member nations] were present and 5 were represented by proxy. The number of delegates did not exceed 50 in total. I remember that during the separate meetings for figure or speed skating, we all sat around the same table... The principal matter being considered was the format for pair skating and the duration of the free programs. For a couple of years, the double performance of the free program for pairs had been tried out at the European Championships but did not prove to be satisfactory. However, there was a strong feeling that the performance of only one program was not good either. Pair skating was the only branch of the sport without a compulsory component ....and it was in the interest of the skaters to give them the opportunity to perform more than once in front of the judges to show their true abilities. So, after a very interesting and passionate debate, it was decided to adopt a 'compulsory program' of two and one-half minutes duration, initially counting for one-third of the total score. The program consisted of six basic elements such as lifts, solo jumps, pair spins and solo spins, death spirals and step sequences. I actively participated in the discussion and gave a strong push for its acceptance. The first use of the new short program was in the 1964 ISU championships, but it was not used in the Olympic Winter Games that year. It is interesting to note that the format of this compulsory program changed in the following years, but it remained as the basis for the 'short program with compulsory moves' which would be adopted in 1971 for single skating as well, and which represented a very important step in the modernization of the sport." 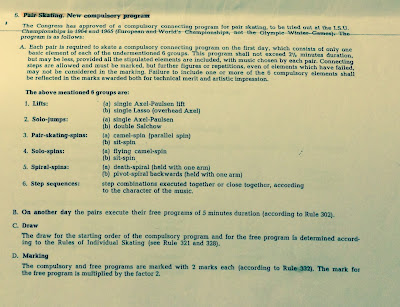 As the original six prescribed elements are included in this communication, I will not include the original proposal in German here on the blog but it's archived in my extensive personal collection if anyone's interested! I have to offer up huge thanks to Marian Scott for pointing me in Mr. Vosátka's direction and to Claire Cloutier for enlightening me as to Sonia Bianchetti Garbato's role in the legislation of this project. However, I have to offer my sincerest thanks to Mr. Vosátka himself for his permission to finally share his untold story. Along the way, so many people make important contributions to figure skating history and many of those people's contributions lie undocumented; lost in time. That's a big part of why I write this blog and focus my energy and attention on uncovering those stories. While so many others devote hours to expounding upon the sea of math that skating has evolved into, there's a whole world of figure skating that we only have to look in our rear view mirror to discover. These stories are in my opinion every bit as, if not more, important.

Skate Guard is a blog dedicated to preserving the rich, colourful and fascinating history of figure skating and archives hundreds of compelling features and interviews in a searchable format for readers worldwide. Though there never has been nor will there be a charge for access to these resources, you taking the time to 'like' on the blog's Facebook page at http://www.facebook.com/SkateGuard would be so very much appreciated. Already 'liking'? Consider sharing this feature for others via social media. It would make all the difference in the blog reaching a wider audience. Have a question or comment regarding anything you have read here or have a suggestion for a topic related to figure skating history you would like to see covered? I'd love to hear from you! Learn the many ways you can reach out at http://skateguard1.blogspot.ca/p/contact.html.
Posted by Skate Guard Blog at September 29, 2015
Email ThisBlogThis!Share to TwitterShare to FacebookShare to Pinterest
Newer Post Older Post Home