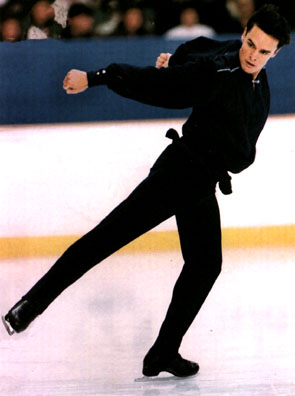 I'm starting to feel a little like the boy who cried wolf. Back in late June, I announced that I no longer intended to include standalone interviews on the blog. The last two that I planned to feature were with Olympic medallists Robin Cousins and Petr Barna but due to schedules and logistics, in late July I released another fabulous interview - this time with World Champion Todd Eldredge. Well, true to life and things not always going as planned, I've got ONE more fantastic encore to share with you, this one planned some time ago. Although we weren't able to finally coordinate an interview until recently, the chance to speak with Canadian and World Professional Champion Sébastien Britten was something I just couldn't pass up as his story is one that is absolutely an important part of the fabric of Canadian history. A true artist in the midst of the quad race, Sébastien's breakthroughs were to be admired and his beautiful skating, in my opinion, speaks for itself.  We spoke at length about the highlights of his career, influences, work as a choreographer and much more in this chat I think you're going to just love:

A: Well, Nationals - or Canadians as we used to call it in those days - back in 1995 was a very special event for the Britten family as my father's side of the family is from Nova Scotia. Just skating for my grandmother Agi (and a whole section full of family members) was a unique highlight! I was really nervous and wanting to skate my very best for all of them. When the chance of winning presented itself, the pressure I put on my shoulders was huge! What I will always remember the most (and I still have a photo of this moment on a wall in my house today) is the moment, at the boards on the ice, right after the free program, when I got to hug my grandmother... a moment I will keep alive in my heart and mind forever since she's gone now.


Q: How would you describe the experience of competing in the 1994 Olympics, especially with all of the media buzz surrounding all of the skaters making comebacks and "the Tonya Harding/Nancy Kerrigan scandal"?

A: Another major highlight in my life! The Lillehammer experience was like spending three weeks on another planet! It was awesome. I loved everything about it. Actually the few months after finishing third at Canadians and making it to the Olympic team was a dream come true, especially since I never went to the World Championships before. Talk about a way to enter a higher sphere of our sport! The Harding/Kerrigan drama/scandal was a big thing in Lillehammer, yes. The excitement of the journalists became a bit of a joke for us athletes. It was also a year when they allowed professionals to come back to eligible competition. Personally, I was more impressed to meet and share the moment with Katarina Witt, Brian Boitano, Torvill and Dean and Gordeeva and Grinkov and all the athletes from other sports than the American drama of you know who!

Q: You were known in your competitive days as an extremely elegant and musical skater. Who was your choreographer and did you do a lot of ballet, dance or off ice training?

A: Well, I did my own choreography, music choices and edits (which I did all my career for all my programs) until my second year as a senior. David Wilson became my choreographer in March 1991 and I was his first international client! Very proud of that. We became friends and creators. I also had the privilege of working on different opportunities with great choreographers like Sarah Kawahara, Sandra Bezic, Michael Seibert and Majoly. I started taking ballet class at Les Grands Ballets Canadiens de Montreal only when I was twenty two. Eventually, I kept training ballet with master Maurice Lemay for six more years. My dream would have been to be a professional dancer.


Q: You won the 1998 World Professional Figure Skating Championships in Jaca, Spain with two outstanding performances against a very deep field that included skaters like Petr Barna, Eric Millot, Alexandr Fadeev and Doug Mattis. How did the experience of competing as a professional differ from your days of ISU eligible competition?

A: Since the invitation to Jaca World Pro came at a very difficult moment (when the transition from eligible to pro was rough and empty) and it came during the ice storm of 1998, I took it very seriously. For me, trying new creative avenues and directions for this event was very important; a necessity. The short program we did, David Wilson and I, was called "Nightmare" and was a more electro-techno piece based on darker moments we all go through in life. For the long, I was fortunate to work with the incomparable Majoly, a dancer, singer, musician and composer. When we met, she asked me what was my vision for music. A few weeks later we met at a dance studio where she worked. She sat me down, asked me to close my eyes, open my heart and played this piece she composed, played and sang for me. "Saraswatti" was the  name of the piece and it brought a multitude of emotions immediately to my senses. Right then and there, I fell in love with it! Majoly had created an original piece for me and what a blessing! The choreography was created as a modern dance in a dance studio and what a blast it was the work on. Majoly pushed me in directions I never explored before. She taught me how to move for real, from the bottom of my soul. The dance was put to the ice by myself with directions from Majoly, since she couldn't skate. It became a trendsetting and unique piece and brought new wind to my skating life... and tens across the boards in Jaca! I loved the freedom I felt in those years I skated as a pro.


Q: Who are your favourite skaters competing today?

A: I really loved Yuna Kim and Patrick Chan and many couples in the dance events but now, I don't really feel much. Hopefully next the Olympics will bring new great vibrations?

Q: How has competitive skating changed for the better (and worse) since you were competing?

A: That's a difficult question. Unfortunately, I think the scandals previous to the changes injured the beautiful sides our sport had to offer and like always, the athletes suffered from those scandals... the loss of credibility, sponsors, TV rights, popularity of the sport. I don't think it has changed for the better. It's another game with less artistry and a much more closed circle with more politics and less humanity. But that's only my opinion.

Q: What kind of music would we find on your iTunes playlist?

A: I listen to a lot of music by Ben Howard, James Vincent McMorrow and the latest Joss Stone CD.
I just love music. There's always music playing at home or in my car... and I love all types of music.

A: Knowledge of pure skating techniques and knowledge of history. Someone generous, who truly listens. Honesty, connection, curiousity, confidence and loyalty. Someone who is open to others, open to delegation and to exploration.


Q: What can you share about your involvement in the sport today and looking forward to the future?

A: For the last nine years, I have been working as a freelance choreographer for many skaters and coaches. I'm based mostly in Québec but I work with a few skaters in other parts of Canada, the U.S.A. and Japan. This year, I created and worked with upcoming young talents in pre-novice, novice and junior and few seniors. Last year, I had two girls in the top four at nationals in senior, Véronik Mallet and Roxanne Rheault (whom I still work with for the long program). I love everyone I share creativity with. I work with all levels - even adults - and not just stars. My goal is to share my knowledge and ideas with as many people as possible...

Skate Guard is a blog dedicated to preserving the rich, colourful and fascinating history of figure skating and archives hundreds of compelling features and interviews in a searchable format for readers worldwide. Though there never has been nor will there be a charge for access to these resources, you taking the time to 'like' on the blog's Facebook page at http://www.facebook.com/SkateGuard would be so very much appreciated. Already 'liking'? Consider sharing this feature for others via social media. It would make all the difference in the blog reaching a wider audience. Have a question or comment regarding anything you have read here or have a suggestion for a topic related to figure skating history you would like to see covered? I'd love to hear from you! Learn the many ways you can reach out at http://skateguard1.blogspot.ca/p/contact.html.
Posted by Skate Guard Blog at September 24, 2015
Email ThisBlogThis!Share to TwitterShare to FacebookShare to Pinterest
Newer Post Older Post Home