One of the things I love most about blogging about figure skating history is piecing together the stories of skaters from decades past... many of whom aren't here to share their stories. That's what made writing today's blog ultimately frustrating. This isn't a story that really CAN be pieced together with any certainty because it's not one from decades ago... more like centuries!

I was at the Killam Library at Dalhousie University recently, which boasts an impressive collection of books about sports history and happened to glance down at a lower shelf. One book in particular caught my eye. It was called "The English At Play In The Middle Ages" and turns out to have been written by Teresa McLean in 1981. I humoured my curiosity to check the index for any references to skating. Lo and behold, I wasn't disappointed. After referring to the well-documented references of skating by the Canterbury monk Fitzstephen, McLean noted that "the excavations at College Street, Ipswich, in 1899 unearthed the sad little find of a woman skater's skeleton, complete with skates, in the mud of the former river course."

Anyone with a periphery knowledge of archaeology has no doubt heard of The Ipswich Man, the skeleton of a man of North African descent who would have lived in approximately the year 1190 and was found buried in England. He's long been a riddle to archaeologists and historians alike and has been the subject of numerous scholarly essays, documentaries and books. But what of this female skater? Was her story any less of a riddle? 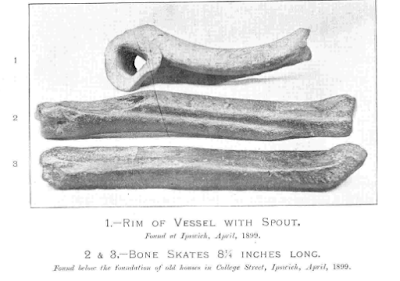 Pioneering female archaeologist and historian Nina Frances Layard's 1899 report "Recent Discoveries On The Site Of The Carmelite Convent Of Ipswich, And The Old River Quay" offers wonderful insight into the story of the skeleton that McLean referred to in her 1981 book. Layard explains that there was a dig site on College Street in St. Peter's where some older houses had been removed to make way for newer ones. When the foundations were dug, an old river bed from a quarry was exposed. She wrote that "here the workman came upon the skull and other bones of a female skeleton, and lying among them I noticed two bones of very different appearance, which showed signs of having been roughly shaped, though for what purpose it was hard to conjecture. By the kind help of Dr. Laver and Mr. Spalding, Curator of Colchester Museum, I have since been able to identify them as bone skates. Such primitive implements were in use in England in Henry II's time, and even considerably later and an interesting account of them is given by Fitz Stephen in his 'History of London.' They are also found in Holland, Scandinavia and Sweden and are still in use in Iceland. Specimens have been dredged up from the bottom of the Thames, and are, I believe, to be seen in the Guildhall Museum... The sites from which these interesting relics of the past were obtained are now both built over. A high red brick structure already covers that part of the convent area which for too brief a space was laid open to the eye of the antiquary, and above the bed of the old river quay, where some unfortunate ancient skater dropped his skates, large business premises have arisen, shutting out forever that temporary glimpse of old Ipswich."

Layard's first hand account of the excavation seems to infer that the bones found with the female skeleton might have been dropped by another skater in the river, which certainly contrasts with the image McLean poses of an unlucky female skater perhaps falling through the ice. Old maps of the area reference a convent of The Carmelite nuns in the area. Who was the woman in the river? We simply do not and will not know. What we DO know is that she will be forever linked with skating history.

Skate Guard is a blog dedicated to preserving the rich, colourful and fascinating history of figure skating and archives hundreds of compelling features and interviews in a searchable format for readers worldwide. Though there never has been nor will there be a charge for access to these resources, you taking the time to 'like' on the blog's Facebook page at http://www.facebook.com/SkateGuard would be so very much appreciated. Already 'liking'? Consider sharing this feature for others via social media. It would make all the difference in the blog reaching a wider audience. Have a question or comment regarding anything you have read here or have a suggestion for a topic related figure skating history you would like to see covered? I'd love to hear from you! Learn the many ways you can reach out at http://skateguard1.blogspot.ca/p/contact.html.
Posted by Skate Guard Blog at September 14, 2015
Email ThisBlogThis!Share to TwitterShare to FacebookShare to Pinterest
Newer Post Older Post Home