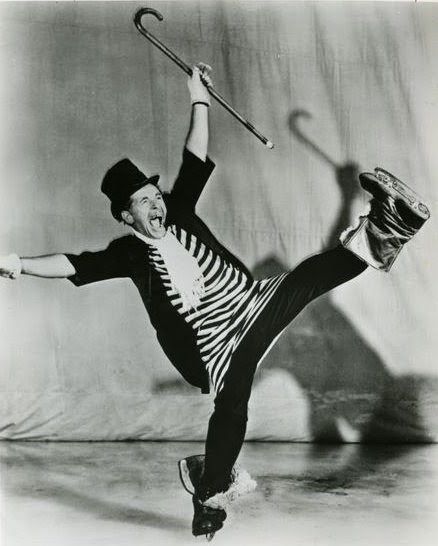 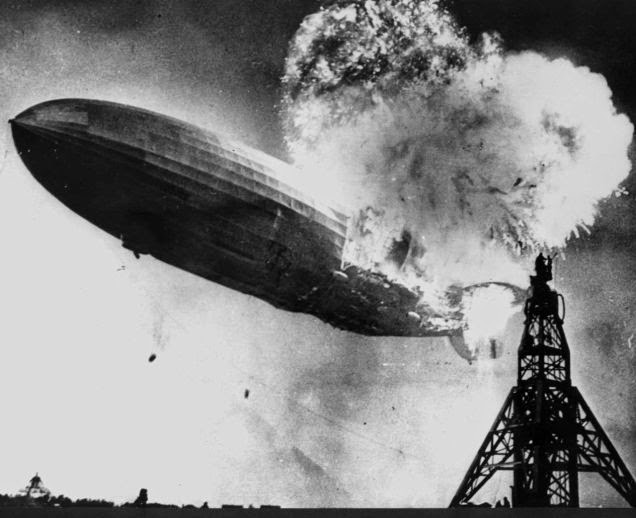 As a child, I remember watching Indiana Jones And The Last Crusade with my family and being absolutely fascinated by the scene where Indy and his father (played by the legendary Sean Connery) boarded a Greek bound zeppelin to escape Germany. There was something about the zeppelin that completely piqued my curiosity. It was completely fantastical and foreign to me - something I could draw absolutely no comparison of anything to. Little did I know that a good twenty years later, I would be writing about a figure skating connection to the world's most (in)famous zeppelin, the Hindenburg. It's funny how things like that work out.

For those who aren't familiar, Dean Nicholas offers an excellent primer on the Hindenburg air disaster in "The Hindenburg Disaster and the End of the Airship Era", his 2011 History Today article on the subject: "On May 6th 1937, the German airship LZ 129 Hindenburg was destroyed in a fire whilst attempting to dock at a station in New Jersey. Theories about what exactly happened differ: at the time, the accident was thought to be an act of sabotage, but it is now generally understood that a spark, possibly caused by static build-up, ignited a fire that blazed through the hydrogen-filled craft. The ensuing inferno, which took the lives of 13 passengers, 22 crew, and 1 person on the ground, was captured on cine film and memorably commented on by an emotional newsreader, Herbert Morrison: This is the worst of the worst catastrophes in the world! [...] There's smoke, and there's flames, now, and the frame is crashing to the ground [...] Oh, the humanity, and all the passengers screaming around here!" For more information beyond Dean Nicholas' article, I definitely recommend giving Stuff You Missed In History Class' 2013 podcast on the subject. I know being a smoker myself I was shocked to learn that smoking on an airship filled with seven million cubic feet of highly flammable hydrogen gas wasn't only possible but all the rage. 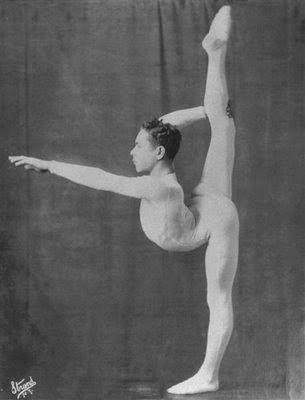 Highly combustible smoking rooms aside, the Hindenburg air disaster marked the end of an era of luxurious zeppelin and dirigible air travel and I was blown away (pardon the absolutely inappropriate and unintended pun) by the number of people that somehow survived this horrific accident. One of those who did manage against all odds to survive was Joseph Späh, a vaudeville comic acrobat who emigrated as a young child from Strasbourg to Douglaston, Long Island, New York. At the time of the disaster, Späh was in the portside dining salon. When trouble began, he smashed the window with his movie camera which he had been using to film the landing of the zeppelin. As the ship neared the ground, Späh lowered himself out of the window and hung onto the window ledge. When the airship was approximately twenty feet from the ground, Späh let go. He kept his feet under him and attempted to do a safety roll when he landed. He did injure his ankle but incredibly survived the fall. He was attempting to crawl to safety when a U.S. sailor slung him over his shoulder and ran him out of arm's way. Let's stop and think about this for a minute. That's simply incredible... like seriously, that's insane!


After making his way away from the fire, Späh spoke briefly to Chicago radio announcer Herb Morrison and reunited with his wife and family who had been on hand to meet the ship. His wife noticed his ankle injury and suggested that they go to the air station's infirmary to have it looked at. The Faces Of Hindenburg blog explains the grim turn of events that followed: "a doctor informed him that he had broken his ankle, then bandaged his foot for him. As they were leaving the dispensary, a nurse called for anyone who could speak German. Späh said that he could, and the nurse led him into a nearby room where a terribly burned young crew member lay in a bed. He said his name was Erich Spehl, and he wanted to send a telegram to his girlfriend back in Germany. Späh wrote down the woman's name and address, and then asked Spehl what he wanted to say to her. Spehl replied with a simple two-word message: 'Ich lebe.' (I live.) Späh told the young man that he would go and send the telegram right away. As Späh turned to leave the room, however, Erich Spehl died."

The Faces Of Hindenburg blog also discusses a shocking after the fact allegation that Späh himself was responsible for the Hindenburg disaster: "Several Hindenburg crew members, including Chief Steward Heinrich Kubis and Captain Max Pruss, were convinced that Späh had sabotaged the ship. These suspicions were raised, at least by implication, in no less than two books on the Hindenburg crash. The 'evidence' of Späh's involvement in a sabotage plot was that he was caught several times walking unaccompanied back to the aft freight room to feed his dog, Ulla (who, sadly, ended up being killed in the crash.). This was against the ship's rules and Späh got some fairly sharp words from the chief steward about it on at least one occasion. Since the cargo room in which the dog was stored was not far from the spot in the aft portion of the ship where the fire started, some took this as evidence that Späh had used his visits to his dog as cover to climb up into the interior of the ship and plant a bomb. Several of the Hindenburg's stewards also claimed to have noticed odd behaviour on Späh's part during the flight, particularly his impatience to land when the ship's mooring was delayed for several hours by thunderstorms. This impatience was, of course, understandable, as Späh had been away from his family for months, and was in all likelihood merely anxious to get home. In the end, there was no solid evidence whatsoever to support these accusations. The FBI investigated Späh fairly extensively before concluding that he had nothing to do with the Hindenburg fire. His wife Evelyn would later recall that when word of the FBI's interest in her husband as a potential saboteur first appeared in the press and she read about it in the newspaper, she went outside to tell Joseph about it. He was cleaning windows at the time, and when she told him that he was suspected of having destroyed the Hindenburg, he was so shocked and upset at the news that he almost fell off the ladder on which he'd been standing. In fact, most of the suspicion of Späh having intentionally destroyed the ship was likely psychological in nature, particularly on the part of Captain Pruss who, for the rest of his life, would insist that his last command had been sabotaged by 'the man with the dog.' If the ship wasn't destroyed by sabotage, then it of course stands to reason that it may well have been an operational failure, and it is understandable that the ship's crew wouldn't exactly be anxious to believe that the disaster had been due to a flaw in either their handling of the ship, or in its design. In other words, those who believed that Joseph Späh had sabotaged the Hindenburg seem to have done so primarily because they needed to believe it." Modern research largely dismisses the sabotage theory and instead purports that static electricity was the culprit in causing fire that ignited the highly flammable and explosive hydrogen gas aboard the zeppelin.

Now... what is Joseph Späh's connection to skating you wonder? After recovering from his broken ankle, Späh returned to his life of vaudeville entertainment under the stage name Ben Dova. His shtick involved staggering onstage in a rumbled top hat and tails, searching in his pockets for a cigarette which was in his mouth the entire time then shimmying up the pole of a gas street lamp to light his cigarette. At that point, the lamp would begin to way wildly and he would perform acrobatic tricks while holding on to the lamp. He performed his act atop New York City's Chanin building and even appeared on the silver screen acting alongside Laurence Olivier in the 1976 film Marathon Man. Following the Hindenburg disaster, Späh revised his Ben Dova act and performed it on ice. According to a March 25, 1957 article in the Long Island Star-Journal "the broken ankle he suffered turned out to be a lucky break, after all. He took up ice skating to help regain its strength, on advice of the family doctor, Dr. Joseph Mooney of Jackson Heights. Naturally, the whole family took it up with him. And today, the talents of the Spahs are almost all 'on ice'. The youngest of the brood, Evelyn, 17, will join her father's act next fall, in a sketch called The Lady And The Tramp. Richard, 21, is a hand at pro skating, as was Marilyn, 22, who met her husband on the rink and has retired to play the role of a landlubbing wife". The article may have been a little backwards - Späh's wife was named Evelyn and likewise his daughter named Evelyn - but it did give some insight as to why Joseph decided to translate his popular 'drunken vaudeville' act to the ice. Following in his father's footsteps, Richard Späh (who had been at the airfield with his mother to meet his father the day of the Hindenburg disaster) too became an ice comedian who went by the name Dick Dova and toured with Ice Follies with comedy team partner Bill Wall. Even more incredibly, Joseph Späh wasn't the only Hindenburg survivor with a skating connection. Werner Franz, one of the last Hindenburg Survivors, passed away in August 2014 at the age of ninety two. He was a member of the airship's crew that also jumped and from the zeppelin and lived to tell the tale. After taking on the role of cabin boy on the Hindenburg, he became a figure skating coach... to two time World Champion Marika Kilius. It appears in the case of the Hindenburg that having skating in blood was a lifesaver all around. 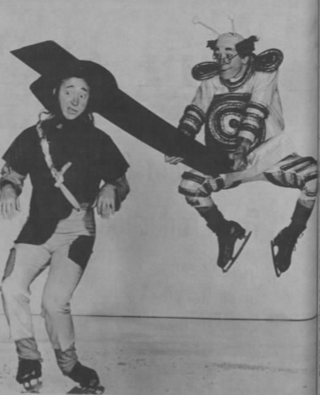 Späh's incredible tale of survival and turn to skating as the result of an injury suffered in one of the world's most well known and horrific air disasters is simply remarkable. James Baldwin once said that "all art is a kind of confession, more or less oblique. All artists, if they are to survive, are forced, at last, to tell the whole story; to vomit the anguish up." Up until his death in 1986, Späh was constantly asked by fellow performers and strangers alike about his harrowing escape from the Hindenburg, and every time he was asked he told the whole story... and along the way, he provided a lot of laughter to the world. That's the sign of an artist.

Skate Guard is a blog dedicated to preserving the rich, colourful and fascinating history of figure skating and archives hundreds of compelling features and interviews in a searchable format for readers worldwide. Though there never has been nor will there be a charge for access to these resources, you taking the time to 'like' on the blog's Facebook page at http://www.facebook.com/SkateGuard would be so very much appreciated. Already 'liking'? Consider sharing this feature for others via social media. It would make all the difference in the blog reaching a wider audience. Have a question or comment regarding anything you have read here or have a suggestion for a topic related figure skating history you would like to see covered? I'd love to hear from you! Learn the many ways you can reach out at http://skateguard1.blogspot.ca/p/contact.html.
Posted by Skate Guard Blog at October 27, 2015
Email ThisBlogThis!Share to TwitterShare to FacebookShare to Pinterest
Newer Post Older Post Home