Britta, Bo And The Bombs 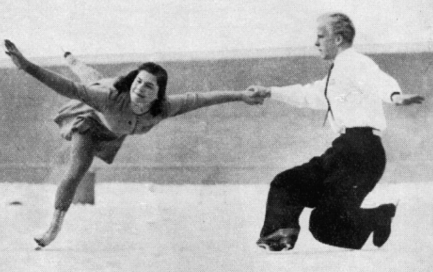 The World Figure Skating Championships have only ever been cancelled for three reasons: the 1961 Sabena crash, World War II and World War I. Anyone studying the sport's history cannot escape the devastating effects that all three of those events had on the sport and the lives of skaters that were so sadly lost as a result... and once again, World War II is a topic that's resurfacing on the blog. In contrast to the sorrowful tales of the Sabena crash in Belgium or the loss of figure skater Anne Frank, the story of Britta, Bo and The Bombs is one of the survival of two skaters... albeit in the scariest of circumstances.

Who were Britta and Bo? Although you may not have heard of them, they were BOTH Swedish Champions. Britta Råhlén won seven Swedish singles titles from 1939 to 1946 and Bo Mothander was a ten time men's champion of his country from 1937 to 1946. The top singles skaters in Sweden formed the ultimate power duo of that era, winning seven pairs titles together and finishing fifth at the 1947 World Championships in their home country after World War II finally ended. Sweden was a neutral country during the War and this would have allowed its skaters to travel freely to Europe to perform. Råhlén and Mothander found themselves in Berlin doing just that in a late afternoon ice skating festival at the Sports-Palast in the fall of 1943. The audience that day was in the thousands.

"Then the sirens screamed. Berliners looked up at the murky mist, in which it was difficult even to see the roofs of buildings, and thought perhaps it was a mistake. Then they heard the roar of planes, an uncertain rumble of barrage, and they scurried for shelters. In Berlin every shelter is a public shelter, so when Ice Skaters Britta and Bo dove into the low cellar of the Russischer Hof across from the Friedrichstrasse Bahnhof, they found themselves among some dozens of assorted people... Bombs began to fall. In a shelter, even on the street, large bombs falling anywhere within a mile or two are felt rather than heard. The walls shook and groaned, glass tinkled in the stairways. After something more than an hour there was quiet. All clear sounded and people ran from the shelters, climbed over the broken-glass rubble, started home or to work, or to help in putting out the fires which raged everywhere," explained John Scott in his December 1943 Life Magazine article "Bombing Of Berlin".

Scott explained that Britta and Bo walked down the Friedrichstrasse, passing eight fires as smoke and dust filled the air. They walked not even half a block before a time bomb exploded, the sirens wailed again and everyone headed back to their shelters. While in the bomb shelter, one woman apparently gave birth to a baby amidst the dust and shaking walls. After the second raid, Britta and Bo returned to the streets, climbing over the rubble of what were once buildings as the winds blew fiercely and the asphalt bubbled. Scott wrote that "during the rest of the night few people slept well in Berlin. Smoke and dust filtered through the bombed-out windows, rain drizzled down through cracked ceilings. Britta and Bo went out on the street at 7 in the morning to take a walk before going to catch the plane for Stockholm. They found the Friedrichstrasse already partly cleaned up from rubble and most of the fires out. There was little water, no gas, no electricity. Smoke hung over the city... Some of the streets had emergency field kitchens giving soup to bombed-out hungry people. Queues before stores were longer than usual but bread and other products were being sold. On Tuesday night mbombs fell again by the hundreds, incendiaries lit new fires still burning from the night before. Again on Friday bombers came in force." 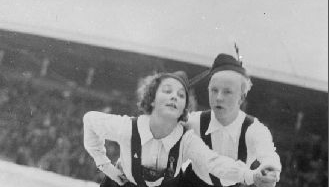 Looking at the timeline described in Scott's article, Britta and Bo (who were quite young at the time) would have been in Germany performing smack dab in the middle of The Battle Of Berlin. The LIFE Magazine article cited Britta as being ten and judging by this 1938 picture I found of Bo skating with Gunnel Ericsson in 1938, he can't have been that much older himself. Estimates place between ninety two and one hundred thousand deaths (MANY of them civilians) and two hundred and twenty thousand people wounded in The Battle Of Berlin series of air raids ALONE... so Britta and Bo would have been just so lucky to have been able to escape from the rubble and make it back to Sweden with their skates and lives. The fact that they continued their competitive careers undaunted without missing a beat the next year at the Swedish Championships in Stockholm kind of blows my mind but it's all relative to what life was like during the Wars I think. Have a few bombs thrown at your house, put on a gas mask then go make supper. It's more than a little hard to wrap your head around but Britta and Bo did it, just as skaters around the world did... and carried on skating together for many years to come.

Skate Guard is a blog dedicated to preserving the rich, colourful and fascinating history of figure skating. Over ten years, the blog has featured over a thousand free articles covering all aspects of the sport's history, as well as four compelling in-depth features. To read the latest articles, follow the blog on Facebook, Twitter, Pinterest and YouTube. If you enjoy Skate Guard, please show your support for this archive by ordering a copy of the figure skating reference books "The Almanac of Canadian Figure Skating", "Technical Merit: A History of Figure Skating Jumps" and "A Bibliography of Figure Skating": https://skateguard1.blogspot.com/p/buy-book.html.
Posted by Skate Guard Blog at November 30, 2015
Email ThisBlogThis!Share to TwitterShare to FacebookShare to Pinterest
Newer Post Older Post Home