Disgrace, Dogs And Dancing: The Diversions Of Dorothy Klewer 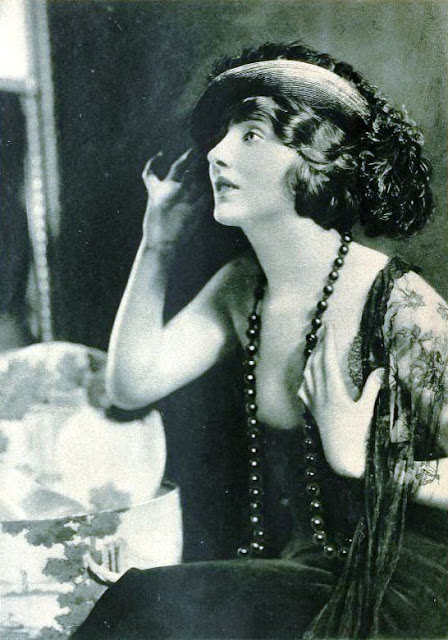 Considering the era, I don't think that it's a stretch at all to say that Dorothy Klewer would have been an extremely controversial young woman in her day.

The youngest daughter of Clara (Weichmann) and William Leonard Klewer, Dorothy Klewer was born June 27, 1896 in Chicago, Illinois. Her father was a respected German born architect; her mother a socialite. Dorothy found herself in society pages from coast to coast when as a teenager, she eloped by climbing out of her bedroom window on a ladder. Her husband was a twenty four year old named R. Mayne Luther, who had opened a dance studio in Denver that flopped miserably. His next venture, a foray into the candy business, was just as unsuccessful. Strapped for cash with a mysterious family 'out west', he wasn't exactly an ideal suitor in the eyes of Dorothy's discerning parents. 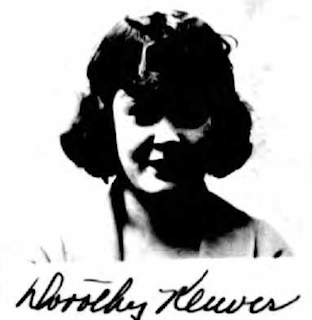 On June 19, 1915, "The Ogden Standard" reported, "When Dorothy Henri Klewer was 16 years old, she naively announced her engagement to R. Mayne Luther. Fashionable society of Chicago's North Side gasped in amazement. Surely pretty Dorothy was not in earnest. Why, she was only a child! But Dorothy was very much in earnest. 'I love Mayne dearly, and we are going to marry in the fall', she told acquaintances." Her Papa forbade it, saying that she was not yet eighteen and hadn't had her 'coming out party yet'. When her mother went out visiting, she "dragged six suitcases from beneath the bed. Into each she packed clothing and some personal belongings. The maid assisted her, not knowing what else to do in the face of a generous tip... She lifted her bedroom window. 'Ooh, hoo!' she called softly. The figure of a young man soon loomed in the semi-darkness beneath the window. 'Bring your auto 'round in back,' said the girl. 'Dad hasn't gone out. And listen. It's the only way I can get out without him seeing me,'" Mayne got a ladder and down Dorothy went. The couple married in Crown Point, Indiana, opened yet another dancing school in Denver (which also flopped) and became dancers at the Baltimore Hotel in Kansas City and The College Inn in Chicago. The marriage lasted less than a year, with her suing him for divorce. The "Daily Missourian" reported, "It has been stipulated by her parents that she could return only by climbing back up the ladder and begging forgiveness from the window sill. Weary of dancing school and cabaret life In Denver and her honeymoon long since waned, she gave up and began the climb." Running home to Mommy and Daddy didn't suit her champagne taste and soon Dorothy (now divorced) was off to The Big Apple.

Dorothy found work as a model in newspaper print ads and - you guessed it - took up figure skating at the St. Nicholas Rink. Although she was a fine 'fancy skater' by all accounts, it was her skating partner who earned fifteen minutes of fame in newspapers from coast to coast. Dorothy gussied up her Airedale terrier, Lizzie, and brought her on the ice with her, much to the amusement of the high society figure skaters that frequented the rink in those days. She even proclaimed (in jest) that Lizzie was 'the world champion dog skater'. The December 23, 1917 issue of "The Sunday Star" noted, "Lizzie has won considerable fame on the ice in the way of speed, but cannot yet perform geometric stunts or figure eights." The January 4, 1918 of the "Chattanooga News" (giving you an idea of how far this story travelled) reported, "Lizzie uses skaters with double runners like little sleds... She is still rather awkward at figure skating." The dancer turned model turned skater was even photographed driving a crude predecessor to the Zamboni... in her figure skates. 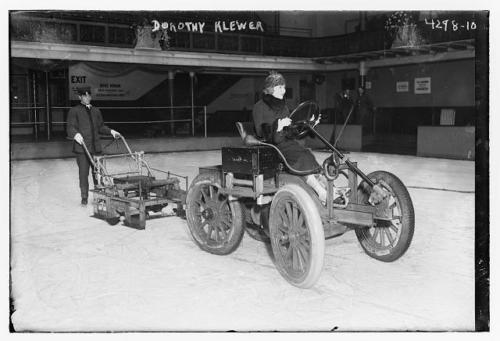 Dorothy's skating days were short lived. Through the connections made at the St. Nicholas Rink, she got a job as a showgirl in the Ziegfield 9 O'clock Revue and Ziegfield Midnight Frolic on the New Amsterdam Roof and went on to act bit parts in Broadway plays. Remarrying to Oscar M. Hunt Jr. on August 6, 1930 in Manhattan, her humble film credits included minor roles in "The File On Thelma Jordan" and "The Hanging Tree". She passed away on March 13, 1960 in Los Angeles, California.

Although the story of Dorothy Klewer and Lizzie remains an obscure footnote in skating history, her story (in hindsight) is definitely 'Best In Show' calibre.

Skate Guard is a blog dedicated to preserving the rich, colourful and fascinating history of figure skating. Over ten years, the blog has featured over a thousand free articles covering all aspects of the sport's history, as well as four compelling in-depth features. To read the latest articles, follow the blog on Facebook, Twitter, Pinterest and YouTube. If you enjoy Skate Guard, please show your support for this archive by ordering a copy of the figure skating reference books "The Almanac of Canadian Figure Skating", "Technical Merit: A History of Figure Skating Jumps" and "A Bibliography of Figure Skating": https://skateguard1.blogspot.com/p/buy-book.html.
Posted by Skate Guard Blog at November 22, 2015
Email ThisBlogThis!Share to TwitterShare to FacebookShare to Pinterest
Newer Post Older Post Home