Flames And Foxtrots: The Strange Case Of The Skatin' Toons Record Company 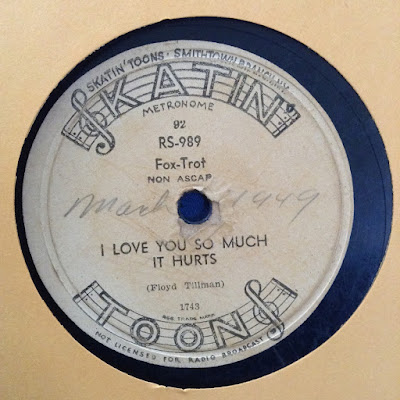 Today, coaches, choreographers and skaters hum and haw as they narrow down choices of music for programs. During World War II, the concern wasn't in whittling down hundreds of selections. As ice dance rose to prominence as a discipline and live orchestras accompanying dance sessions were becoming an impracticality, clubs in North America faced a real struggle to find appropriate recorded music for compulsory dances. Books provided suggestions, as did "Skating" magazine, which housed a regular column called "Good Records For Ice Dancing". With the same need being present in roller skating, a handful of companies decided to cash in and produce records of compulsory dance music. The first and the most successful was the Skatin' Toons Record Company, based in Smithtown Branch, New York. Skatin' Toons opened for business in 1939 and produced ten new records and a one hour tape recording every month in the forties. Their first advertisement ran in the December 1942 issue of "Skating" magazine and soon the company's hokey pipe organ music was played at clubs from coast to coast. They were doing great business... until the business found themselves smack dab in the middle of some serious courtroom drama.

The owner of Skatin' Toons Record Company was a New York City man by the name of Charles H. Stoll. He operated the business under the pseudonym Allen Strow. A curious decision at very least, but a hotly contended topic when he found himself in court on February 19, 1948 battling The Camden Fire Insurance Association, Globe and Rutgers Fire Insurance Company, The Home Insurance Company and the Commercial Union Assurance Company, with whom he had taken out four fire insurance policies. When a fire destroyed the main dwelling and partially destroyed other property of his premises - including the Skatin' Toons Record Company - on March 12, 1947, the loss was calculated at $43,564.14. He got his money. However, the insurance companies were livid. They claimed that as Stoll had used a pseudonym to take out the policies, he had pulled the wool over their eyes. They were not far off.

In 1940, he collected $1,800 when there was a fire in the residence of his Hempstead, Long Island residence. Three years later, he collected $350 when the barn on the same property burned down. The next year, it was $6,860 when the house, barn and outbuildings of his Vermont property burned to the ground. In 1945, while a mechanic was repairing his airplane at the Hickville Aviation Country Club, that too caught fire. He collected $4,585. That was not even all. He had also collected on windstorm damage on an airplane and theft of equipment, all within a five year period. The skating record maker was either the most unlucky man in America, or perhaps more likely, a flim flam man.

His defense was incredible: "In connection with the acquisition of the policies affecting this Smithtown property, no disclosure was made of the plaintiff's previous experiences in being visited by these fires, and the collection of insurance moneys thereunder. This is alleged to have constituted wilful concealment of material facts and circumstances. It should be added, if it has not been previously made clear, that he was not requested in any manner by or on behalf of the defendant companies to make any statement or representation, oral or written, concerning such or any other matters whatever." In other words, "no one asked!" Based on the fact that Stoll had never been previously convicted of arson and that "since 1939 has been, a maker and distributor of phonograph records, and does business under the trade-name of "Skatin Toons"... in that connection he adopted the name Allen Strow for reasons which cannot be said to be devoid of plausibility" the judge let him off the hook.

Stoll - or should I say Strow - rebuilt but in March 1953, the company was purchased by Wally Kiefer, a former rink operator in the midwest and at the White Plains Skating Rink who was the office sales and office manager for Skatin' Toons in the five years after the fire. As skating associations and the ISU took the distribution of skating music into their own hands, the company soon became obsolete.

Want to hear what the Skatin' Toons sounded like? Record collector Lon Eldridge shared this obscure gem from his collection on his Smack The Shellac blog on January 13, 2014:

Skate Guard is a blog dedicated to preserving the rich, colourful and fascinating history of figure skating. Over ten years, the blog has featured over a thousand free articles covering all aspects of the sport's history, as well as four compelling in-depth features. To read the latest articles, follow the blog on Facebook, Twitter, Pinterest and YouTube. If you enjoy Skate Guard, please show your support for this archive by ordering a copy of the figure skating reference books "The Almanac of Canadian Figure Skating", "Technical Merit: A History of Figure Skating Jumps" and "A Bibliography of Figure Skating": https://skateguard1.blogspot.com/p/buy-book.html.
Posted by Skate Guard Blog at November 28, 2015
Email ThisBlogThis!Share to TwitterShare to FacebookShare to Pinterest
Newer Post Older Post Home