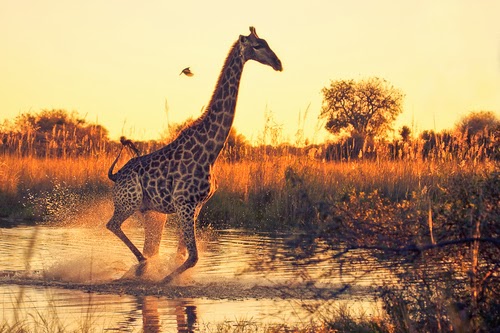 When I started learning a little about the very first international figure skating competition held in Africa, I was just dying to learn more and more about this historic milestone... and believe me, the story of this event did NOT disappoint. I want to start by saying that owe a HUGE thanks to South African figure skating historian Irvine Green and the South African Ice Skating Association for their invaluable assistance in helping me bring this particular blog to you!

Okay, let's start with the basics. Although the 1947 South African Championships in Africa were the first official figure skating competition to be held in Africa, they of course were not an international affair. It wasn't until three decades later, when the South African Ice Skating Association organized an international event in 1973 that skaters from outside of South Africa would travel to the country to compete. This was huge stuff. Due to the political situation in the country, the ISU had as of the late sixties stopped accepting entries from the country at the World Championships and Olympics and this of course was in response to the apartheid in the country. That didn't stop South Africa from bringing the world to Johannesburg to compete at this small international meet that featured nineteen skaters from South Africa, the U.S., Luxembourg, West Germany, Austria and Great Britain. 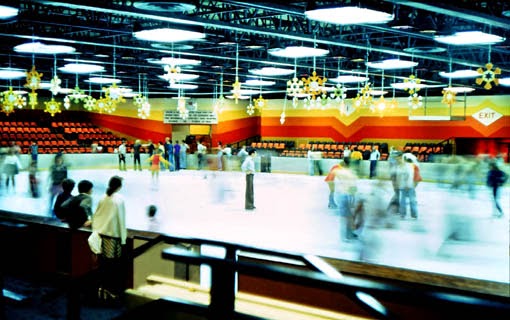 The success of the 1973 event led to the first Skate Safari competition, which was first held from April 2-4, 1975. In an effort to forge ties with the ISU, the guest of honour was the organization's then First Vice President John Shoemaker. The event also marked the first visit to the country by esteemed London sportswriter Howard Bass. Two other factors contributed greatly to making the event a success, the first being the introduction of television to the country that year and the second being the fact that 1975 was the first year that the South African federation employed a public relations director. The event got significant publicity and media attention... but the real question was to whether the skaters would succeed or were be haunted by past failures. I forgot to mention where in Johannesburg this competition was held! Remember the haunted Carlton Hotel Sky Rink from last year's Skate Guard Hallowe'en Spooktacular? You got it! 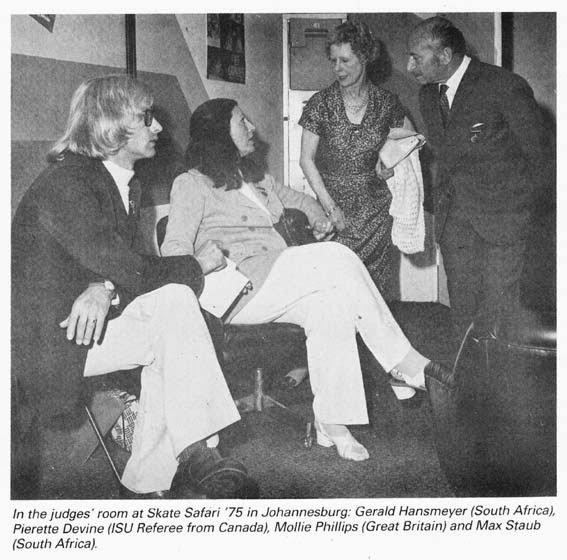 Over twenty skaters from Austria, Great Britain, South Africa the U.S. and West Germany participated in Skate Safari in 1975. Unsurprisingly, the largest contingent came from the host country. The event was presided over by ISU referees Pierette Devine and Max Staub and judges were Ludwig Gassner of Austria, Mollie Phillips of Great Britain, Estelle Daniel, Gerald Hansmeyer and Sylvia Strasheim of South Africa, Elaine DeMore of the U.S. and Erika Schiechtl of West Germany. No ice dance competition was held but the other three disciplines were hotly contested. 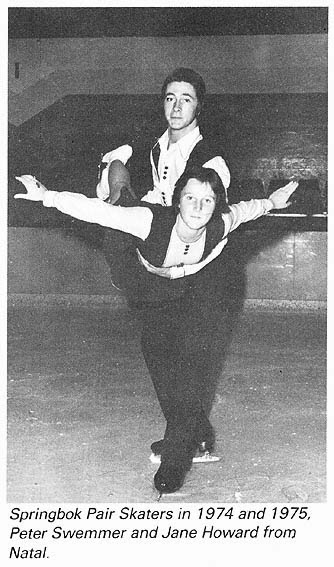 The pairs event was compromised of five teams: Austria's Michael and Ursula Nemec, Great Britain's Ruth Lindsey and Alan Beckwith, South Africa's Jane Howard and Peter Swemmer, America's Emily Benenson and Jack Courtney and West Germany's Sylvia Jaeckle and Axel Teschemacher. The gold medal went to the only one of the five teams who had competed at the 1975 World Championships in Colorado Springs, the brother/sister team of Ursula and Michael Nemec of Austria, leaving the American and West German teams to finish second and third. It appeared early on that the Commonwealth countries were out of luck.

In the ladies event, there were eight entries. West Germany was represented by Vera Burding and Petra Wagner, the U.S. by Barbie Smith, South Africa by Lynne Rayner and Marijke Swierstra, Great Britain by Yvonne Kavanagh and Gail Keddie and Austria by Sabine Winkler. The winner was future U.S. Silver Medallist Barbie Smith and the silver medallist West Germany's Petra Wagner. The Commonwealth's luck turned around when British Silver Medallist Yvonne Kavanagh was able to best Gail Keddie, who had defeated her at that year's British Championships and earned the sole British ladies spot at Worlds. 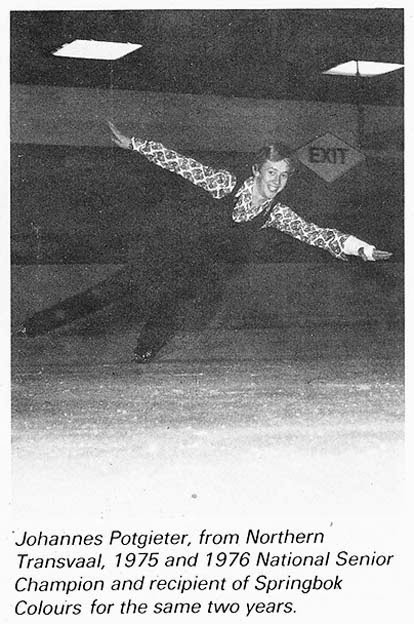 The men's field was comprised of Austrian Gerhard Hubmann, West Germany's Gert-Walter Graebner, South Africa's David Dobbie, Danny Dreyyer and Johannes Potgieter and two incredible men's skaters who would both go on to win medals at the 1980 Winter Olympic Games in Lake Placid... none other than Robin Cousins and Charlie Tickner. The event was a memorable early face-off between the future rivals. In the school figures, Tickner gained an edge he was able to maintain when Cousins faltered on a double axel/double loop combination in the short program. Although Cousins bounced back and won the long program with a triple salchow, triple toe and double axels in one of the best free skating performances he'd ever given to that point, he ultimately lost overall to Tickner in a 3-2 split. The bronze went to West Germany's Gert-Walter Graebner, who would go on to win his only West German title the next year and later become an orthopedic surgeon in Cologne. 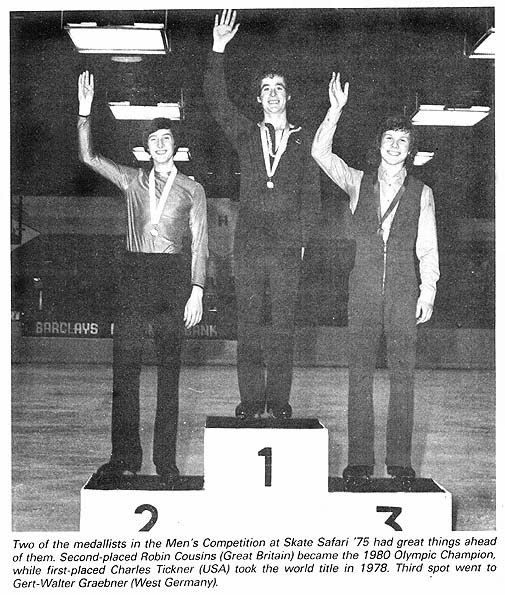 In his book "Skating For Gold", Cousins reflected on his 1975 Skate Safari experience: "Almost immediately after arriving home from Colorado Springs, I found myself being put on a South African Airways plane to Johannesburg, to compete in that city's second international competition and the first to be called Skate Safari. Various national associations had been invited to send teams, to compete in Johannesburg and then, after a safari tour around the Kruger National Park, to go on a tour of other South African cities. I was thrilled at being asked to go such a long way from home and to such a beautiful place as South Africa. It seems such a tragedy that the people should be troubled by so much political controversy. The competition was very well organized, and for the second time, I came up against Charlie, the eventual winner. I was placed second, but had the satisfaction of winning both the short and long free skating programmes. Thus, I collected one gold and two silver medals - for winning the free, coming second in the figures and second overall. It was my first senior international medal for figures and my first international free skating gold. So what started out as a competition which I was expected just to go and enjoy, without any expectations, ended up as a very rewarding international medal 'picker-upper'. The tour afterward took us to some beautiful places. We had four days in Durban to spend on the beach before our first exhibition show at the local rink, followed by similarly fascinating visits to Port Elizabeth, Pretoria and Cape Town."

Although none of the South African skaters who competed in the 1973 or 1975 events were able to really keep up with the high standard of skating put out there by their international guests, for the vast majority this event would prove to be THEIR Olympics as the opportunities for these skaters to go elsewhere and compete was just not a possibility in the political climate at the time. 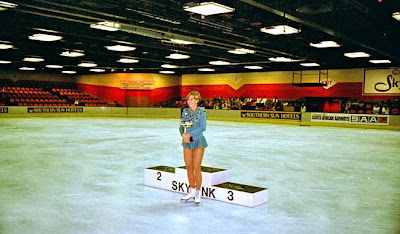 Skate Safari would continue to be held sporadically over the years and even be, in its eighth time being held, included as an ISU Junior Grand Prix event during the 2008/2009 season, when two of my past Skate Guard interview victims (Ricky Dornbush and Alexe Gilles) won gold medals. I've had a chance to interview some wonderful skaters from South Africa in the past but I've never visited, even though that's one place on my 'bucket list' I'd just love to go. I will unashamedly admit I'm a big fan of The Amazing Race and I'll never forget when the teams visited Victoria Falls on the show's very first season just being amazed with the beauty and diversity of southern African countries. Hopefully someday I can coordinate that bucket list visit with a Skate Safari competition. A sister can dream!

Skate Guard is a blog dedicated to preserving the rich, colourful and fascinating history of figure skating. Over ten years, the blog has featured over a thousand free articles covering all aspects of the sport's history, as well as four compelling in-depth features. To read the latest articles, follow the blog on Facebook, Twitter, Pinterest and YouTube. If you enjoy Skate Guard, please show your support for this archive by ordering a copy of the figure skating reference books "The Almanac of Canadian Figure Skating", "Technical Merit: A History of Figure Skating Jumps" and "A Bibliography of Figure Skating": https://skateguard1.blogspot.com/p/buy-book.html.
Posted by Skate Guard Blog at November 04, 2015
Email ThisBlogThis!Share to TwitterShare to FacebookShare to Pinterest
Newer Post Older Post Home