It's that time of year again when we gather with loved ones, break out the booze and bird and have a ball! I kicked off my Christmas celebrations today here in beautiful Halifax, Nova Scotia by burning off some steam skating on the Emera Oval. 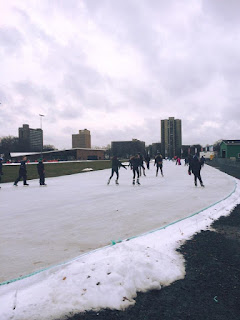 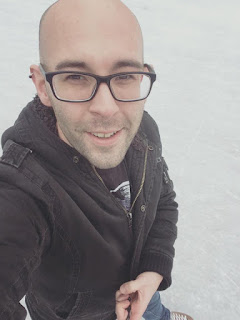 It has been a very crazy few weeks. Between working like a dog, shopping up a storm and spending time with those near and dear, I have been plugging away like mad at research for the Belita book. It has been a blast! I am happy to take a break from all that fun to share with you the Christmas edition of the blog!

As we all know, figure skating history is rich with wonderful holiday themed performances, shows and television specials (many of which I have touched on already during last couple of years) but there is just so, so much more when it comes to skating at Christmastime that I am thrilled to share. So ignore that grinch named Cinquanta for a moment and get ready to celebrate the best and the rest in this special holiday history roundup!:

Colour me surprised (not really) that 1976 Olympic Gold Medallist John Curry stole the show in Perry Como's 1977 television special "An Olde English Christmas". Produced by Yvonne Littlefield, the variety production also featured appearances by actress Gemma Clark and musicians Petula Clark and Leo Thayer. The fact of the matter is that it had to be a much happier moment for Curry than the Christmas season before. In Bill Jones' wonderful book "Alone: The Triumph And Tragedy Of John Curry", Jones recounted the sting of homophobia Curry felt when at the 1976 Sports Journalists' Association Christmas bash at a London hotel when a comedian introducing Curry cruelly quipped on the microphone: "It's good to feel the Christmas spirit among us all. And here comes the fairy for for the tree." Jones recalled that "Curry received his award in near silence, heartbreak written on his face. It was, he later said, 'one of the most hurtful incidents in my life.'" One can only hope that the fact that his Christmas performance a year later during Como's special was praised incredibly highly must have served as some small consolation and put him a little more in the holiday spirit. 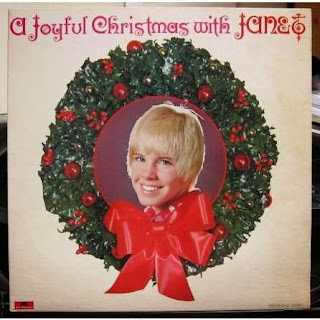 A JOYFUL CHRISTMAS WITH JANET

Remember when we took a look at skaters who were also musicians last November? Yeah, neither do I, honey. No, but seriously... one musical skater who I failed to mention in that particular blog was 1972 Olympic Bronze Medallist Janet Lynn! In 1973, Janet released a record in Japan called "A Joyful Christmas With Janet". It's got all of the classics: "Silent Night", "O Holy Night", "Jingle Bells", "The Christmas Song" and "O Come All Ye Faithful" and it could be yours on vinyl for the not so low, low price of $59.99 USD. The holiday season in 1973 was in fact incredibly good to the U.S. Champion. Just days before Christmas, Janet won the first of Dick Button's World Professional Championships, which were held in Japan and billed as the $100,000 International Professional Figure Skating Festival. THAT kind of money buys a whole lot of egg nog and mistletoe. If you are feeling the Janet Lynn love, do not forget that we will be ringing in 2016 on the blog with a top ten countdown of her best performances! You do not want to miss it!

From one legend of U.S. ladies skating to another, 1976 Olympic Gold Medallist Dorothy Hamill appeared with a cast of skating loving youngsters in the 1982 Andy Griffith special "An Early New England Christmas", which actually won a Primetime Emmy Award. Although we don't see much actual skating from Dorothy in this clip, the song and skating we do see is absolutely charming and kind of gives you that warm feeling you get after one too many glasses of homemade holiday rum punch.

IT'S THE MOST WONDERFUL OSMOND TIME OF THE YEAR

Just when you think things just can't get anymore saccharine sweet, here's the Osmond brothers skating a holiday themed performance in one of their many television specials. I can't say I'm personally a huge fan of the Osmond's (just not really my thing) but you have to admire the fact that these brothers all look so smooth on their blades. Although Donny and Marie did indeed perform together on the ice in other shows they did, this clip doesn't feature Marie. In case you're wondering, the youngest and smallest is indeed the man with the perfect teeth - Donny himself.

I can honestly say I hadn't ever seen this scene from the 1978 television special "Christmas Eve On Sesame Street" (that I remember at least) and I thought it was absolutely adorable! I'm sorry, but there's something about The Count counting while Ernie, Bert and The Cookie Monster played 'crack the whip' that just cracked ME the hell up.

Did you know that 1991 World Silver Medallist Tonya Harding's first public performance since "the whack heard around the world" fallout was on December 23, 1994? You better believe it. During a public skating session at the Dorothy Hamill rink at Clackamas Town Rink in Portland, Oregon, Tonya came out in a red felt Mrs. Claus costume with faux fur trim to skate a solo performance to "Have Yourself A Merry Little Christmas". She had to dodge about a dozen skaters during her performances but managed to stay on her feet. She did, however, scrap a planned second (pairs) performance with Patrick Page to "Please Come Home For Christmas". As expected, the rink was packed with fans, detractors and curious onlookers alike as well as a throng of reporters and photographers. After her 'show', she handed out candy canes to the media and wished them "Merry Christmas" and "Happy Holidays". Not everyone was thrilled about the free show by the disgraced Olympian. In the morning Spokesman-Review the day of the show, Rod Turley, who was shopping with his two young children, remarked "It's despicable. She'll probably wear some really skimpy outfit. What kind of message is that sending to the kids, Tonya Harding as Mrs. Claus?" The only message that imagining this particular performance sent me was that it was time to break out the wine and have MYSELF a merry little Christmas... nooooow.


From my family to yours, Merry Christmas, Happy Holidays, Happy Hanukkah, Happy Festivus For The Rest Of Us... Whatever and however you celebrate, I celebrate the fact that you all have enjoyed exploring figure skating's rich and fascinating history with me throughout the year. It's been a blast and I can't wait to continue on the journey! There won't be a new blog until after Christmas Day or Boxing Day but I'll be back with something you're going to love reading over your turkey, cranberry and stuffing sandwiches on December 27 to start the countdown to a new year of great skating. Peace and love to you all!

Skate Guard is a blog dedicated to preserving the rich, colourful and fascinating history of figure skating. Over ten years, the blog has featured over a thousand free articles covering all aspects of the sport's history, as well as four compelling in-depth features. To read the latest articles, follow the blog on Facebook, Twitter, Pinterest and YouTube. If you enjoy Skate Guard, please show your support for this archive by ordering a copy of the figure skating reference books "The Almanac of Canadian Figure Skating", "Technical Merit: A History of Figure Skating Jumps" and "A Bibliography of Figure Skating": https://skateguard1.blogspot.com/p/buy-book.html.
Posted by Skate Guard Blog at December 21, 2015
Email ThisBlogThis!Share to TwitterShare to FacebookShare to Pinterest
Newer Post Older Post Home