Nudes On Ice: Yes, It's A Thing That Happened 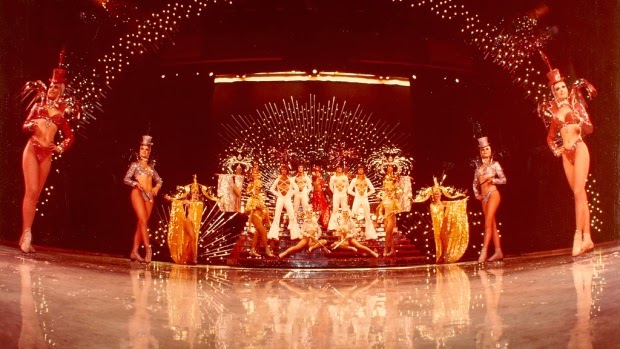 On an episode of "Murphy Brown", stoic anchorman Jim Dial responded to someone saying "We're
all naked under our clothes" by stating "I, for one, am NOT!" A fitting introduction for the naked truth of today's Skate Guard blog if there ever was one... for this one takes a look at figure skating's best kept dirty little secret: Nudes On Ice. 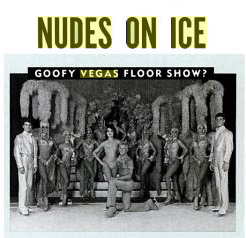 No, ladies and gentlemen, this is no joke. In years past, Las Vegas' Thunderbird Hotel, Hacienda Hotel and Union Plaza Hotel played the backdrop for a series of incarnations of figure skating shows featuring a cast of talented skaters (almost) in their birthday suits. The shows were produced by both Bill Moore and George Arnold. After producing their original effort Rhythm On Ice at the El Cortez in 1960, Arnold (a former Ice Capades skater) and Moore opted to take advantage of the old "sex sells" adage and produce the shows Ecstacy On Ice, Spice On Ice, Fantasy On Ice, Playgirls On Ice and Nudes On Ice. Mike Weatherford's 1998 article in the Review-Journal explained that with their show "the duo received belated recognition, of a sort, when Nudes On Ice became a surprise hit at the Union Plaza in 1988. The low-budget title was one they had recycled from an early production at the Aladdin. But national publications such as The Washington Post and 60 Minutes humorist Andy Rooney made it a metaphor for a dying era of Las Vegas show business." The final show ran until late 1990. 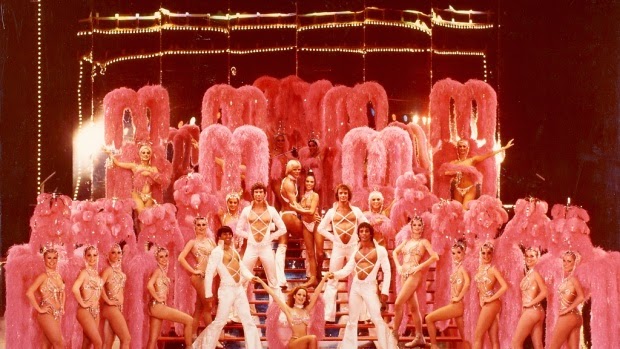 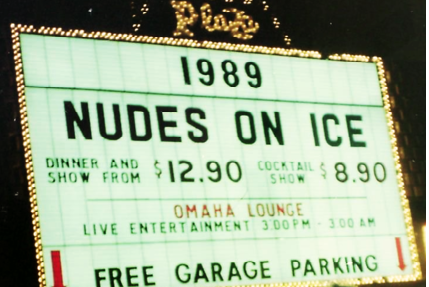 The shows were staged on smaller tank ice stages (fifteen by fifteen feet in one case) and featured skaters like Canadian Champion Kay Thomson and Polish show skater Jola Iglikowska. The first of the shows was held in the seventies at the Thunderbird Hotel and in a 1979 interview, Arnold explained "when I was asked to come out here from New York and produce the ice show, I had never seen a nude ice show before. I actually had to ask my father and mother for permission to produce the show, Ecstasy on Ice. The show ran for over three years. It even made the cover of Time magazine." Weatherford described the productions as "defiantly old-fashioned even as Las Vegas redefined itself: Topless showgirls on rainbow-colored staircases, sequined costumes with plumes and feathers, and jugglers and other speciality acts once synonymous with the Strip." The seven act show featured both male and female cast members in various skimpy costumes and a steppy little grand finale set to the show's theme music, "Staying Alive", "The Lady In Red" and "New York, New York".

A feature in the May 1989 issue of Spy Magazine explained that the Nudes On Ice name was technically a little misleading: "advertisements for the show beckon temptingly from taxis and billboards all along the strip: NUDES ON ICE! NUDES ON ICE! Unfortunately, the too perfect title is something of a misnomer. Yes, the skaters are on ice, but no, they're not technically nude: they're topless since total nudity in hotel shows is illegal in Nevada. And to make matters even less nude, only four women out of a coed cast of fifteen are topless. The quartet glides across the stage at the beginning of each number, then skates to the side, clomps off the ice and stands motionless, forming a not technically nude proscenium for the forthcoming entertainment."

All in all, I don't know about you... but if I paid for tickets to Nudes On Ice and didn't get to see any full frontal male nudity, I'd be asking for my money back... or at very least some free chips and someone to validate my parking. That said, this all but forgotten if not really seedy series of shows did do one thing for the sport: offer a whole new meaning to baring your all on the ice.

Skate Guard is a blog dedicated to preserving the rich, colourful and fascinating history of figure skating and archives hundreds of compelling features and interviews in a searchable format for readers worldwide. Though there never has been nor will there be a charge for access to these resources, you taking the time to 'like' on the blog's Facebook page at http://www.facebook.com/SkateGuard would be so very much appreciated. Already 'liking'? Consider sharing this feature for others via social media. It would make all the difference in the blog reaching a wider audience. Have a question or comment regarding anything you have read here or have a suggestion for a topic related to figure skating history you would like to see covered? I'd love to hear from you! Learn the many ways you can reach out at http://skateguard1.blogspot.ca/p/contact.html.
Posted by Skate Guard Blog at December 04, 2015
Email ThisBlogThis!Share to TwitterShare to FacebookShare to Pinterest
Newer Post Older Post Home