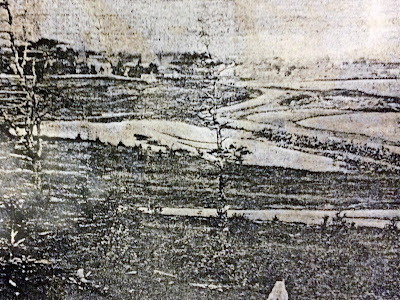 Steele's Pond in Point Pleasant Park, back in the day

From Patrick Chan, Meagan Duhamel and Eric Radford, Kaitlyn Weaver and Andrew Poje and Kaetlyn Osmond to the stars of tomorrow, the 2016 Canadian Tire National Skating Championships has brought the best skaters in Canada to center stage right here to Halifax, Nova Scotia this week. Today, the four part feature on the host city's rich skating history continues. Whereas the last two blogs looked at the role those of affluence played in popularizing skating in Halifax, today we'll look at the role the 'unwashed masses' - in other words, everyday Haligonians - played in developing local skating history:

Going back to part one of this blog, we recall that Griffin's Pond (the original home of the Halifax Skating Club) was fed by The Fresh Water Brook, now underground and part of the Halifax Commons. This brook actually fed an incredible number of skating ponds all through Halifax's south end and where the brook didn't provide, the Halifax Fire Department would often flood depressions in the North Commons to make temporary rinks to meet the needs of the throngs of Halifax skaters looking for a place to 'cut a fancy figure' or 'turn a Valse'.

In his January 2 and 9, 1988 "Walking" columns from The Mail-Star, late Halifax historian, lecturer and author Lou Collins noted that The Fresh Water Brook "wended its way southeast by way of Fenwick Street and small valleys and gullies until it reached the east end of Inglis Street and then entered Halifax Harbour not far from the present railway pedestrian tunnel. Ships' crews had for over a century rowed ashore to the mouth of this brook to fill casks with fresh water, hence the name: Fresh Water Brook... In the course of the last two decades of the 19th century the Reverend Robert Murray, Presbyterian scholar, hymnodist, and editor of the Presbyterian Witness, took over Studley on Coburg Road, the estate that once belonged to Sir Alexander Croke, stern Judge of Vice-Admiralty and elevated Anglican. In a hollow fringed by willows, just north of the Murray Homestead, was an attractive small pond, popular in winter with skaters. According to a local report, a group of British Army officers from the garrison chose to skate on Murray's Pond [northeast of the Dalhousie University chemistry building] on a Sunday. While they were told courteously that they might skate on the Pond during week days, they were informed, in high Victorian style, that they were to leave immediately and not repeat their Sunday escapade on Murray's Pond."

More accessible South End ponds were the 'Pogey' or 'Poor House Pond' on South Street, on the future site of the Grace Maternity Hospital. Collins' Pond was located in the depression in Collins' Fields between Inglis and South Streets and is long gone as well. Two ponds existed on the north edge of Point Pleasant Park (according to Hopkins's Atlas Of Halifax Of 1878) but only Quarry Pond remained as of 1988. You don't see people skating there these days either. Collins also recalled that "perhaps the best known of the south-end ponds was [Steele]'s Pond, now covered by the Haltern Containerport and its adjacent parking lot. On this pond Haligonians were to enjoy skating for many years. It is said that the historic Halifax Skating Club grew out of the skating opportunities provided by [Steele]'s Pond." So that gives you another indication as to where the members of the Halifax Skating Club might very well have gone after the Murray's Pond and Exhibition Building rinks ceased to be.

In addition to ponds, skaters even ventured on to marshes. In the January 31, 1963 issue of the Mail-Star, E.G.L. Wetmore recalled, "How many who were Southenders in their youth have happy memories of Ritchie's swamp in Marlboro Woods? Now it's all houses, lawns and wide residential streets... Probably a hot potato never tasted better than one retrieved from glowing embers of a wood fire built in shelter of the big rock which was the time honored place for putting on boots and skates. Some of the spuds would be eaten, and others tucked into the toes of the temporarily abandoned walking boots. For some of the skaters there would not even be in need to exchange footwear, they would just clip on the popular Acme spring skates turned out by Starr in the Dartmouth plant."

In the area west of the Northwest Arm were such popular skating spots as Williams' Lake and The Frog Pond. Collins wrote, "in Edmond's Ground, the Duck Pond near the old barn may have known very young participants... When winters were more severe and there was less pollution in the North West Arm, its surface was frozen often enough to be recorded as a popular destination for skating. While not providing the hard, glass-like surface of fresh-water ice, salt-water ice is firm, less brittle and more flexible, although eroded at the tide mark by the rise and all of the tides." Chocolate Lake (between Herring Cove Road and St. Margaret's Bay Road) was the most popular skating spot on the Isthmus until World War II. Collins recalled, "it had become so popular in the years immediately before the Second World War, that change huts, complete with canteens, had been provided by enterprising residents and others. These, for a small charge, provided warmth, safety for footgear, and reduced the need to hide one's boots under the roots of a tree in the darkness of the western shoreline." Other popular skating destinations were McFatridge's Pond on Robie Street, the playfield south of Gorsebrook School, Deal's Pond (east of Bayers Road) and Devlin's Pond (just north of Dutch Village Road) and Stanford's Pond, a shallow pond full of reeds and grass just below St. John's Anglican Church and cemetery. Although people certainly skated on the latter, it was considered the least attractive option in the area as the ice often wasn't great.

The cutting of ice blocks for refrigeration became a regular problem faced by Halifax skaters. Not only would men from Farmers cut ice from Deal's Pond for their dairy on Windsor Street, citizens would often take matters into their own hands for food storage. Crystal Martin of the Dartmouth Heritage Museum explained, "a lot of people cleared off lakes to skate or play hockey; then they would go back the next day to find that the ice had been cut."

The Northwest Arm would freeze in parts and daring skaters would often venture as far west as Williams Lake but most skaters had the sense to turn back to warnings of 'warm springs' and thin ice. Legends even persist of skaters crossing sections of the Halifax Harbour. Late historian George Mullane wrote that in 1821 "when the harbour was frozen over, but the ice by no means thick enough to be considered safe, many broke through, although many tried to use the ice surface to travel between Halifax and Dartmouth in that January... Drownings were recorded... A son of John Gibbs, messenger to the House Of Assembly who was immersed, was so exhausted that he died in a few hours. Today an ice coated harbour is only a memory."

Speaking of memories, stay tuned to the blog! Tomorrow we'll have the final part of this series and on Thursday, a recap of how the best skaters in Canada are MAKING history in 2016 in the novice and junior events leading up to the marquee events at the 2016 Canadian Tire National Skating Championships later this week. You do not want to miss it!

Skate Guard is a blog dedicated to preserving the rich, colourful and fascinating history of figure skating and archives hundreds of compelling features and interviews in a searchable format for readers worldwide. Though there never has been nor will there be a charge for access to these resources, you taking the time to 'like' on the blog's Facebook page at http://www.facebook.com/SkateGuard would be so very much appreciated. Already 'liking'? Consider sharing this feature for others via social media. It would make all the difference in the blog reaching a wider audience. Have a question or comment regarding anything you have read here or have a suggestion for a topic related to figure skating history you would like to see covered? I'd love to hear from you! Learn the many ways you can reach out at http://skateguard1.blogspot.ca/p/contact.html.
Posted by Skate Guard Blog at January 19, 2016
Email ThisBlogThis!Share to TwitterShare to FacebookShare to Pinterest
Newer Post Older Post Home