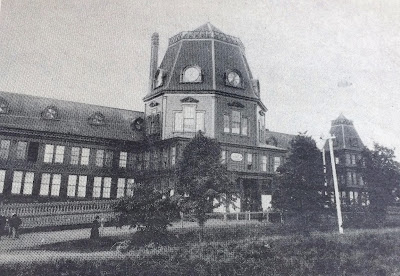 From Patrick Chan, Meagan Duhamel and Eric Radford, Kaitlyn Weaver and Andrew Poje and Kaetlyn Osmond to the stars of tomorrow, the 2016 Canadian Tire National Skating Championships has brought the best skaters in Canada to center stage right here to Halifax. Due largely to geography - the East Coast always seems to get the short end of the stick when it comes to skating history - the city's rich skating tradition is often overlooked. Although we've explored Halifax skating history before on the blog, it's high time that we took a more in depth look.

Although some newspaper sources indicate this rink opened in 1880, a well researched January 1986 article by Heather MacDonald called "Skate 1880" that appeared in The Westender sets the record straight (explaining it actually opened a little earlier) and gives us some wonderful detail about this competing rink in the Empire Exhibit Hall on Tower Road and Morris Streets: "One of the most popular, and grandest, rinks was the Exhibition Building Rink. Located on the present site of All Saints Cathedral, the Exhibition Building was the first permanent exhibition building in Halifax and was said at the time to be the largest construction in Nova Scotia. [When it] opened in September, 1879, it had been completed in three months. (To achieve this remarkable feat, the contractor had employed 70 carpenters.) A semi-circular drive faced its main entrance on Tower Road. The exterior, oblong in shape, was 231 feet long, 80 feet wide, with towers 20 feet square at each corner. Another tower in front, 40 X 50 feet, formed an octagon after it reached the second story. This main tower was 90 feet high, covering four stories and a garret. The main entrance was faced with an open portico, with glass doors opening into a large entrance hall. The ground floor contained offices and the rink. A platform, 11 feet wide ran around the building. The 261 x 60-foot space bordered by the platform was used for an ice rink in the winter and exhibition displays, concerts and parties the rest of the year. The first floor had a viewers' gallery and general-purpose rooms. The second floor contained an art gallery. The northwest tower contained the keeper's apartment on the second and third storeys; ladies' 'retirement rooms' were on the ground floor. Men's 'retirement rooms' were on the ground floor of the southwest tower. The other towers were furnished for ordinary exhibition purposes. In the daytime the building was lighted by floor to ceiling windows, so close together they gave the impression of being glass walls. At night it was light by gas. An eight-inch crock drain ran the length of the building. A hydrant inside the building was used for flooding in the winter and was a safety precaution against fire. The rink was formally opened January 5, 1880, with a large ball attended by the Lt. Gov. Adams G. Archibald and other dignitaries. In addition to skating, over the years, masquerades, concerts, exhibitions and balls were held there including a gala ball on the occasion of Queen Victoria's Golden Jubilee in 1887." 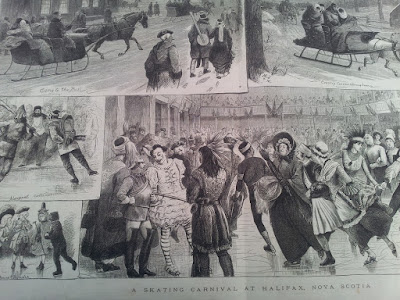 Etching of a Skating Carnival at The Exhibition Building Rink from the April 10, 1880 issue of The British newspaper The Graphic. I've got the original in my private collection - how 'bout that?

This covered rink, like the one in the Gardens, was built by The Halifax Skating Rink Company. Interestingly, the company's secretary-treasurer was a direct descendant of Richard John Uniacke, the abolitionist and former Attorney-General of Nova Scotia who played an extremely prominent role in Nova Scotian history. He would have been in attendance at these lavish skating carnivals that rivalled the Montreal Masquerades. Entrance tickets were sold almost like a movie ticket by session for 'gentlemen', 'ladies' and 'families' as opposed to a yearly membership. 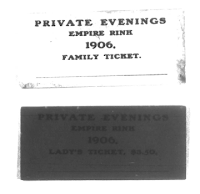 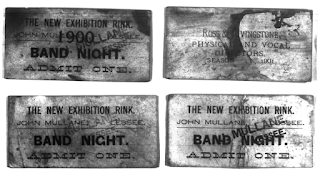 Like in the Gardens rink, Valsing (waltzing on ice) was extremely popular with an emphasis placed on the pleasures of skating. Although The Dominion of Canada was part of The Commonwealth, 'fancy skating' in Halifax was the polar opposite of the rigid English Style practiced overseas. School figures would have been of little interest to these skaters; it was all about the ice dancing and carnivals.

An article from the February 7, 1899 issue of The Halifax Daily Echo described one such carnival at the Exhibition Rink: "The Royal Canadian regiment and St. Patrick's bands rendered a splendid programme, including many waltzes, which the skaters and spectators enjoyed. The ice was never in better condition, and one well known skater said he had never seen a better sheet in his life. There was nothing very strikingly new in the costumes, though nearly all were very neat and some very pretty. There was only one group noticeable – the Geisha girls (Frank Stephen, D'Arcy Weatherbee and C. Grant) who were made up to represent three very presentable maidens. A lampshade costume, worn by Mrs. Green, was of crimpled paper arranged with pretty effect. Among the ladies who wore particularly nice costumes were Misses Burns and Seeton, as Black and White supplement; Miss Cameron, Yuletide; Miss Dimock, as Phyllis; Miss Darville, as an olden time lady, and Miss Farrell as Folly. Another costume that attracted notice was that of the Daisy, worn by a lady whose name was not among those registered. On a dark green dress were worked daisies, and she wore a little cape with a yellow centre near the neck and the petals falling over the shoulders. On her head was a hat which was a perfect representation of a large daisy, with a yellow centre and the rim of white petals. Among the gentleman's costumes was the Pink Un', by Mr. Jones, R[oyal] A[rtillery]. It consisted of white satin knickerbockers, with pink satin cutaway coat and vest. A tall pink silk hat, with a miniature horse race on the crown, completed the costume, over which were scattered cards and sporting papers, the whole representing a well known English sporting paper. During the evening a couple of sets of lancers were danced, and these, with the waltzing, would give visitors an idea of how well Halifax people skate."

When the Halifax Skating Club lost its home in 1889, it's entirely likely that its members would have come crawling to the competition, but at any rate, it would have all been short-lived. MacDonald explained that "an act was passed in 1896 to enable the city council to sell the Exhibition Building and grounds. New exhibition buildings, later destroyed by the Halifax Explosion, were erected on the corner of Robie and Windsor Streets at the end of the century. In 1906, six of the grounds' lots were sold to St. Luke's congregation (later amalgamated with All Saints) for $3,000 dollars each. The sod-turning ceremony took place on September 25, 1907. In the same year, the towers of the old Exhibition Building were destroyed and the building moved to South Street. It continued to operate as a rink for a few more years."

We've heard about where it all started and now, about the role that the Halifax Explosion played in Halifax's skating history, but there's so much more to the story! As the novice and junior events at the 2016 Canadian Tire National Skating Championships get underway over the next few days, we'll continue exploring the city's unique skating tradition.

Skate Guard is a blog dedicated to preserving the rich, colourful and fascinating history of figure skating. Over ten years, the blog has featured over a thousand free articles covering all aspects of the sport's history, as well as four compelling in-depth features. To read the latest articles, follow the blog on Facebook, Twitter, Pinterest and YouTube. If you enjoy Skate Guard, please show your support for this archive by ordering a copy of the figure skating reference books "The Almanac of Canadian Figure Skating", "Technical Merit: A History of Figure Skating Jumps" and "A Bibliography of Figure Skating": https://skateguard1.blogspot.com/p/buy-book.html.
Posted by Skate Guard Blog at January 18, 2016
Email ThisBlogThis!Share to TwitterShare to FacebookShare to Pinterest
Newer Post Older Post Home