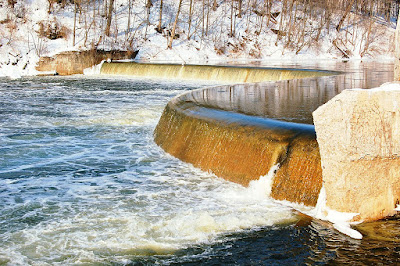 I wouldn't know a thing about overindulging in alcohol whatsoever. Alright, I'll be honest with you. I couldn't even keep a straight face when I typed that. Yes, I'll admit it. I do from time to time indulge in a glass or three of Pinot Grigio too many but I can say with absolute certainty that I have never gone skating after one drink too many. The same can't be said for the figure skaters of Paris, Ontario in 1883.

For those of you who have no clue where Canada's Paris is, it's a small town on the Grand River in Brant County. Today its population is a mere eleven thousand but back in 1883 the town's population was just over three thousand and was mainly comprised of gypsum miners and their families. Like proper nineteenth century Canadian settlers, they loved their skating and it was an immensely popular pastime during the long winters.

The February 1, 1885 edition wrote of a special performance by Professor Heine who "was the champion of Michigan, and gave a very pretty entertainment in the Paris Skating and Curling Rink on Friday last. He gave universal satisfaction to those present, when he amazingly skated on stilts, eighteen inches high, on the bottom of each of which was a coloured light. He also jumped over barrels and other obstacles." Every bit as popular as skating was a little nip now and then... and you can't really blame the residents of Paris because - let's be real here for a minute - Ontario winters can be brutally cold. You have to keep warm somehow, don't you?

But here's the thing... Not everyone in Paris, Ontario was a fan of drinking. In The Brant Review two years before Professor Heine's visit, Reverend H. Hughes of the Congregational Church spoke "pretty strongly about the depraved youth of Paris. He was struck with the prevalence of drunkenness among the young men. He had recently witnessed, on Saturday night, between thirty and forty men coming out of a certain hotel, which he named; the oldest not more than thirty, and the majority between sixteen and twenty. He further stated that a livery-stable owner said, 'The young men love darkness better than light because their deeds are evil.'"

It turns out that these hotel drinkers after party of choice was the frozen Penman's Dam, site of the Paris Skating and Curling Rink. The Brant Review wrote that these 'depraved youth' in question (labelled largely as American workers who had come to Paris to work in the town's button-making shop) went to go "fancy figure-skating" in 1883 and "had become deliberately intoxicated when they should have been home in their beds and had several bottles of whiskey and other liquors, and later could hardly make their way home." It all came to a head, according to Donald A. Smith's book "At the Forks of the Grand, Volume I: 20 Historical Essays on Paris, Ontario" when that same year, one button-maker who worked at the shop that was behind what is now the town's post office "became so drunk at the rink, that, as he wobbled around, he continually bowled over other skaters. Finally, the caretaker, Mr. Luxford, ordered him off. The drunk replied by throwing Luxford to the ice. Then Luxford's son rushed to the defence, and after a fierce struggle subdued the assailant - and the cost of a bitten cheek and a chewed thumb."

Biting? Really? You'd think that was where it all ended but sadly, no. The drunken button-making skaters returned as an angry mob a month later to settle their score with the rink's caretaker Luxford but were again tossed out on their asses after more yet more fisticuffs. The grand finale to the story of this drunken skater's brawl? After they got kicked out of the rink, the button-makers made their way to the Windsor Hotel on Grand River Street where according to The Brant Review "they insulted and attacked Mr. F.O. Allworth and lady friend. One struck him from behind and another jumped on his back." In irony, the drunken skater was fended off when "Allworth cut one's hand with his skates before freeing himself." Are you kidding me?! I never would have thought of Paris button-makers being so in-Seine, but hey, now we all know so we can be on the lookout!

Skate Guard is a blog dedicated to preserving the rich, colourful and fascinating history of figure skating. Over ten years, the blog has featured over a thousand free articles covering all aspects of the sport's history, as well as four compelling in-depth features. To read the latest articles, follow the blog on Facebook, Twitter, Pinterest and YouTube. If you enjoy Skate Guard, please show your support for this archive by ordering a copy of the figure skating reference books "The Almanac of Canadian Figure Skating", "Technical Merit: A History of Figure Skating Jumps" and "A Bibliography of Figure Skating": https://skateguard1.blogspot.com/p/buy-book.html.
Posted by Skate Guard Blog at January 16, 2016
Email ThisBlogThis!Share to TwitterShare to FacebookShare to Pinterest
Newer Post Older Post Home