Downton Abbey On Ice: The Sensational Stories Of Skating Servants 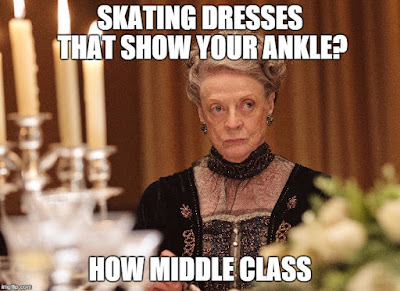 "Skating-floors will, of course, be laid down in the houses of all the affluent, and invites will be issued from Portland-place and Park-lane... It will be the privilege of a gentleman to solicit the hand of a lady for the next figure-of-eight, to beseech her to take part with him in the date of the year, or to join him in a true-lover's knot. Servants will skate in and out with real ice." - excerpt from "The Artificial Floor For Skating" by George Cruikshank (1841)

At the time, many would have taken George Cruikshank's 1841 essay "The Artificial Floor For Skating" - which imagined servants skating around a parlour with an ice floor as light comedy. After all, most writings about skating during the Victorian era spoke only of the well-to-do. Skating may originally have been an activity for the classes instead of the masses, but hidden in plain sight are the stories of how servants took to the ice with the same enthusiasm as their masters. 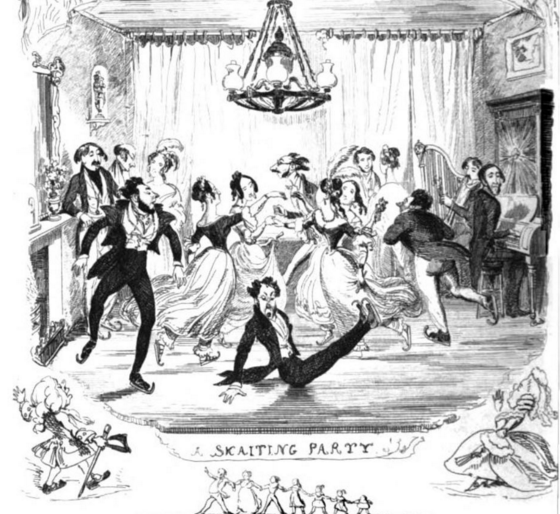 In the nineteenth century in Holland, it was thought of as nothing to see milk-maids skating to market with pails balanced on their heads and porters racing down frozen rivers and canals with their loads but in many other parts of Europe, domestic servants would have been confined to the shorelines, steering carriages and sleds carrying their masters and tying their skates. With little freedom or time for recreation, one of the few times many servants to the wealthy would have had the luxury of taking to the ice would have been when they were watching over children... and keeping them away from undesirables. One mother's account from The New York Daily Tribune on Friday, December 31, 1909 noted that "the cautious mother does not let her child go skating without a bodyguard of servants" for fear of "the children of the rich [meeting] the children of the tenements".

'Lucky' servants took on more coveted roles specific to skating. Some rinks employed servants for the express purpose of assisting the well-to-do in putting on their skates while others - recall "The Skating Waiters Of St. Moritz" - were hired to serve skaters refreshments. In the late forties, the affluent Mrs. John Labatt (a member of the London Skating Club in Ontario) was known to have her servants serve drinks to the adult skaters. We can even recall from the December 2014 Skate Guard blog "Frozen Tennis Courts In The Himalayas: Skating History In India" how rickshaw and carriage builder Jack Blessington had his Indian servants assist in flooding tennis courts in Shimla for skating by spraying them with water.

More generous masters were known for encouraging their servants to take to the ice. Nicholas Blundell, the Lord of the Manor of Little Crosby in Merseyside, England, wrote in his eighteenth century diaries of taking his servants ice skating and Lord Halifax of Hickleton allowed his servants to skate on a South Yorkshire pond, recalling "beginners being impelled... on a wooden chair from the kitchen by the excellent Smith who had begun life 50 years earlier as my mother's pony boy and had become butler." Perhaps most amusing are accounts of masters actually REQUIRING the help to entertain them with their skating. The eccentric Henry Pelham Archibald Douglas Pelham-Clinton, 7th Duke of Newcastle-under-Lyme reportedly spent two million pounds constructing tunnels, underground chambers, a large ballroom, chapel, conservatories and skating rinks at Welbeck Abbey. Skating ran in the Duke's family - he was a descendant of William Grant, the subject of Gilbert Stuart's famous painting "The Skater" - but the only times the skating rinks were used were when he demanded that his chamber maids and stable boys skate for his amusement. Similarly, E.S. Turner's book "What the Butler Saw: Two Hundred and Fifty Years of the Servant Problem" recalled how the Duke of Portland installed a skating rink on his grounds "on which his servants were expected to disport. According to a family memoir, if he came across a maid sweeping a corridor he ordered her out to skate, whether she had any desire to do so or not."

For other masters, the popularity of skating posed a major dilemma. There are many accounts from the turn of the century of maids refusing to accept positions unless they were given two or three nights off a week to go skating. These 'demands' became so widespread that "Punch" Magazine even depicted a maid refusing a job because there was no skating rink nearby in one of its 'Servantgalism' cartoons. Pardon the pun, but the icing on cake? In the March 20, 1908 edition of The Port Augusta Dispatch, one uppity Australian lady of the house wrote in to complain about her help thusly: "The young person who can lay claim to the simplest rudimentary knowledge of domestic affairs is scarce indeed. I have tried a long series of town 'ladies' who kindly consented to board with me and do a little housework at odd times, but their abilities if they had any were all in the social line. In fact 'going out' appeared to be their forte. One was an accomplished skater. While the Glaciarium was open, not a single night did she miss, and when fancy dress carnivals were on (and they seemed to occur with unceasing regularity once a week) she was lost to the public during the preceding day, her whole attention being devoted to the fancy toilette. It is satisfactory to know, that one's cook has secured several prizes as a fancy skater, but one could wish that her ability had been more in her hands and less in her feet."

Of all these stories of servants skating, perhaps the most charming is an anecdote from the March 3, 1955 edition of The Milwaukee Chronicle, which noted that "the known history of floor waxing starts with the French whose palace parquet surfaces gleamed with wax polished by servants who skated across the floors with rags tied to their feet." There you have it! If you don't think history can teach you anything, you are wrong. Take a lesson from old Jeeves - or Jacques - and get to cracking on those floors. I may be mistaken, but I believe you get extra points for Swiffering up extra stains in the second half of your program.

Skate Guard is a blog dedicated to preserving the rich, colourful and fascinating history of figure skating and archives hundreds of compelling features and interviews in a searchable format for readers worldwide. Though there never has been nor will there be a charge for access to these resources, you taking the time to 'like' on the blog's Facebook page at http://www.facebook.com/SkateGuard would be so very much appreciated. Already 'liking'? Consider sharing this feature for others via social media. It would make all the difference in the blog reaching a wider audience. Have a question or comment regarding anything you have read here or have a suggestion for a topic related to figure skating history you would like to see covered? I'd love to hear from you! Learn the many ways you can reach out at http://skateguard1.blogspot.ca/p/contact.html.
Posted by Skate Guard Blog at February 09, 2016
Email ThisBlogThis!Share to TwitterShare to FacebookShare to Pinterest
Newer Post Older Post Home