Fifty Two In Thirty Nine: The Afternoon Of The Waltz 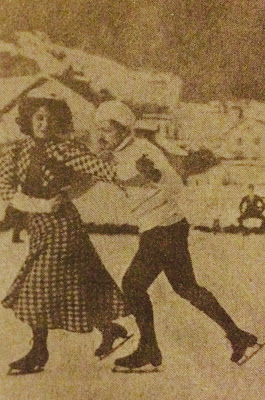 Prior to the institution of the current IJS system, the record for the most ice dance teams to compete in any given World Championships was first set in 1994 in Japan, when no less than thirty six teams took the ice to skate two compulsory dances. Can you imagine judging that?! When one team - Noemi Vedres and Endre Szentirmai of Hungary - withdrew before the original dance, that made thirty five, a number of entries that I'm sure no one at the ISU thought they'd ever see again... but they did. In 2001, that number was equalled and in 2012, under 'the new system' another record was set at the World Championships in Nice, France, when no less than thirty eight teams started the ice dance competition.

The locale of that 2012 current record is fitting because it is exactly where the event we are discussing today took place. Alright, almost... right country, wrong city. Let's set our time machine dial to March 25, 1939. It was just before World War II and the location was the Molitor Rink in Paris. Remember how we talked in past blogs about the consistent passion for ice dancing in French skating history? France was ready to prove its point that year. The Club des Sports d'Hiver de Paris (The Club Of Winter Sports Of Paris) and The Elysee Skating Club pooled their resources that year to do something completely unprecedented... hold the largest ice dancing competition in history. Organized by André Fouquières, the event was 'an original ice waltzing competition' featuring no less than FIFTY TWO ice dance teams!

Fouquières not only assembled a judging panel with the knowledge base and patience to be able to sit through fifty two waltzes, but he also talked many of the teams into participating. What made the competition so unique wasn't only the massive number of entries. It was who those entries were. The country's top ice dancers competed against recreational skaters and old timers. Pairs skaters, like the then reigning national champions Guy Pigier and Soumi Sakomoto, competed.

Skaters who had long since retired like Charles Sabouret and Elvira and Louis Barbey returned to contest the title. Arne Lie, who was a four time Norwegian men's champion in the twenties, ice danced with his wife. According to the French newspaper Le Journal, other contestants include Messr. and Mme. Henriques and Mlle. Blum. Although the public record doesn't let us know how it all went down in terms of results, it's pretty safe to say that an ice dancing competition of that magnitude was challenging to judge and quite a spectacle to watch. It is also quite possible that that record may never be repeated, but who knows? We tend to get a little too caught up in the present sometimes and forget that in a few decades time, what is current news may be as long forgotten as this ice dance milestone from decades past.

Skate Guard is a blog dedicated to preserving the rich, colourful and fascinating history of figure skating and archives hundreds of compelling features and interviews in a searchable format for readers worldwide. Though there never has been nor will there be a charge for access to these resources, you taking the time to 'like' on the blog's Facebook page at http://www.facebook.com/SkateGuard would be so very much appreciated. Already 'liking'? Consider sharing this feature for others via social media. It would make all the difference in the blog reaching a wider audience. Have a question or comment regarding anything you have read here or have a suggestion for a topic related to figure skating history you would like to see covered? I'd love to hear from you! Learn the many ways you can reach out at http://skateguard1.blogspot.ca/p/contact.html.
Posted by Skate Guard Blog at February 18, 2016
Email ThisBlogThis!Share to TwitterShare to FacebookShare to Pinterest
Newer Post Older Post Home