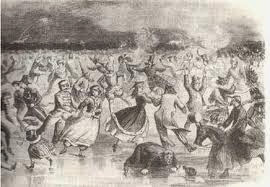 Here's my guess. You're probably reading the title of this blog going "Gymkhanas? What in the hell is a gymkhana?" It's actually an Indian word that denotes "a place where skill based contests are held". In the Victorian and Georgian eras in Switzerland, the word 'gymkhana' was used to describe incredibly popular outdoor winter social festivals with games, food, skating contests... basically like a flea market with sports. However, as is often the case when the well-to-do get together in throngs, these affairs were often underscored with ulterior motives that went far beyond social networking.


At that point in skating history, The Continental Style reigned supreme in Europe. As many of skating's elite (including practitioners of the competiing English Style) headed to Switzerland to practice on beautiful outdoor ice, tensions were often high. Harry Stone's wonderful book "Ski Joy: The Story Of Winter Sports" sets the stage for the fetes and gymkhanas in Switzerland of the era and talks of how skaters of two different styles getting together brought politics into play: "The National Skating Association experienced its moment of truth in St. Moritz. They had spent years dithering over admitting the Continentals as a special section of the Club. But they had a traitor among them: In 1907 Edgar Syers stole a despicable march by announcing from London that he had formed a British club for the Continental stylists. The English school were furious. Not only had they been outmanoeuvred but Syers was not even a good skater. It was widely recognized that it was his wife, Madge, who carried him through all the pair championships they had won. With Princes as his base, the uppity Edgar Syers had acquired an almost unassailable position for his new fangled association. He had successfully inveigled the prestigious sporting Earl of Lytton into accepting the presidency. To add insult to injury, Syers had pre-empted the National Association and had already lodged an application for international status. Within two years the National Skating Association had planned a terrible revenge. After protracted negotiations, Edgar Syers was coerced into agreeing to an amalgamation. A meeting to forge the link was held at the Kulm Hotel. There the English school made sure of their triumph. While passing a motion congratulating the secretary E.E. Mavrogordato for the 'care and trouble he had taken,' no mention was made of Edgar Syers. As a final indignity, he was not even voted onto the committee." With this politically charged rivalry as a backdrop, work on developing rinks and clubs in Switzerland and governance of skating was 'set aside' for a series of weekly grand parties. 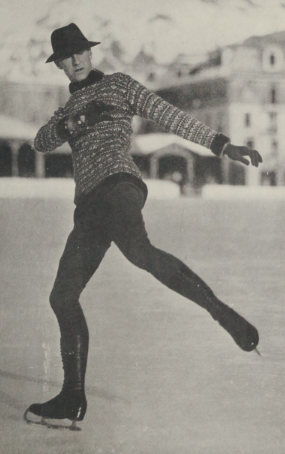 Fetes were daytime affairs with a log fire burning, cake served and exhibitions of free skating given in both the English and Continental styles. Relaxed competitions in school figures for the more proficient skaters in attendance were contested. In contrast, gymkhanas were much more lavish afternoon or dusk affairs. Stone's book explains that "gymkhanas were altogether more frivolous with everyone encouraged to join in. They were usually organized by one or two of the local sporting clubs who used the entrance fee as a way of raising funds. One of the hotel bands would be hired for the occasion, Chinese lanterns were hung down the centre and on reaching the bottom, would split on either side. On reaching the top again, each would be joined by another skater so that the next time there would be four. They would keep doubling up until there was a massive column filling the entire rink. After a day or so of many diverse exertions, everyone would forgather for tea, or more probably, hot chocolate. In those hotels created for mountaineers there was little ceremony. A president at The Bear in Grindelwald tells how 'tea was served out of two urns with large baskets, chained to table legs to prevent theft, and filled with cakes. One just helped oneself to tea and as many cakes as one wanted and sat down wherever there was room. One one lady, whose husband was the uncrowned king of the British skating, was allowed a tablecloth and a teapot... At this time 'apres ski' - and even the American cocktail - were still unknown. Guests had to find their own amusement during the dull dusk interval between tea and dinner. The serious skaters at The Bear would congregate in the entrance hall, passing around a dirty and increasingly damp towel for cleaning the blades prior to leaving their boots overnight on one of the big heaters. Most hotels had a billiard room where the men would repair. The ladies would knit or read in the lounge while the band played selections from the light classics."

The use of music in these skating parties would surely have been met with disdain by the English skaters in Switzerland, who only a few years previous had been outraged at the Bear Hotel in Switzerland when Continental skaters had asked for a band to be hired to accompany their skating and had been effectively shut down by the English Style skaters. The Continental Style skaters decided to hire their OWN band then and the English Style skaters were forced to go along with it, much as they would have been at the gymkhanas. With the interpretation of music playing such an integral role in skating over the decades to come, it seems hard to fathom that skaters of a time not really so long ago would have had such rivalry over music being played at a skating rink. Politics aside. The 'good old fashioned fun' of these parties where competitors let their hair down and set aside their differences can offer the skating community a lesson even today. We don't always have to agree but if we work together and have a little fun, progress can and will continue to be made. Like the tables at The Grindelwald Skating Club's gymkhanas, there is room for everyone.

Skate Guard is a blog dedicated to preserving the rich, colourful and fascinating history of figure skating and archives hundreds of compelling features and interviews in a searchable format for readers worldwide. Though there never has been nor will there be a charge for access to these resources, you taking the time to 'like' on the blog's Facebook page at http://www.facebook.com/SkateGuard would be so very much appreciated. Already 'liking'? Consider sharing this feature for others via social media. It would make all the difference in the blog reaching a wider audience. Have a question or comment regarding anything you have read here or have a suggestion for a topic related to figure skating history you would like to see covered? I'd love to hear from you! Learn the many ways you can reach out at http://skateguard1.blogspot.ca/p/contact.html.
Posted by Skate Guard Blog at February 11, 2016
Email ThisBlogThis!Share to TwitterShare to FacebookShare to Pinterest
Newer Post Older Post Home