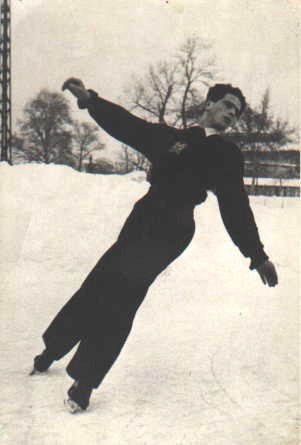 Born July 11, 1933 in Budapest, Hungary, György Czakó first took to the ice at the age of six. "I was a late child because my father was a soldier in the first World War and spent four and a half years as a prisoner in Siberia," explained the eighty two year old in a series of February 2016 interviews. "I was about three or four years old when I got tuberculosis. Because in this time, there was no medicine (antibiotics, penicillin) against this disease, yet I was not allowed to walk. When the disease was over, the doctor suggested to my parents that they should take me to fresh air, for instance to skate outside."

Czakó's first efforts at the Városligeti Műjégpálya were not met with encouragement. "The first coach told me I should go home and never skate any more because I am not talented," he explained. "Others told me just work hard and you will be successful. I believed the others. In those times, we had only one skating rink in Budapest. Beautiful region, but it was open only four months a year." Despite limited ice time, by the age of eighteen the young skater who once told to never skate again was Hungary's senior men's champion. 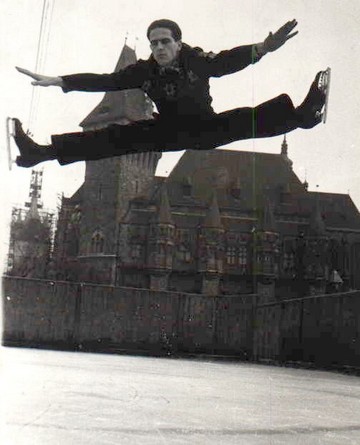 The following year, the rising star was sent to represent his country at the 1952 European Championships. He finished eighth of ten entries and was named to Hungary's six member Olympic team. In Oslo, Czakó finished in twelfth place but performed alongside medallists Jeannette Altwegg and teammates Marianna Nagy and her brother László in the closing ceremonies. He drew inspiration from his more seasoned competitors. "Naturally there were other skaters as models for me," he said. "I looked up to Dick Button who was Olympic Champion before the silver medallist Ede Király from Hungary. If you want to win you have to learn everything from the better ones and add something which is individual. At least this should be aimed for."

Not in the least discouraged by last place finishes at both the 1953 European and World Championships, Czakó soldiered on and tried new things. He skated pairs with Olympic teammate
Eszter Jurek and invented the Czakó jump, a variation on the Walley. He explained, "we were out in [the] Soviet Union to 'change experience' at the time when the Soviet figure skating was in [its] infancy. When we were out there the second time, I noticed that the eighty second jump in a register of a Russian coach is the Czakó jump. Then at the Olympic Games it turned out that this jump was invented in the west as well and was called Robertson, somewhere else Walley." The difference between the Czakó jump and the Robertson jump, as the Hungarian Champion explained, is in the take off: the Czakó from a crossover, the Robertson from a serpentine. 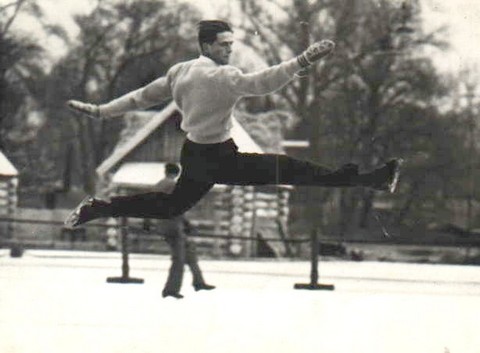 After defeating future Olympic Gold Medallist Manfred Schnelldorfer at the 1955 European Championships in his home city and winning a silver medal at the Winter Universiade, Czakó turned professional, joining a Hungarian ice revue. "I turned to the Hungarian skating show in 1957," he explained. "I skated as soloist seven years in this show. There where about thirty five to forty skaters but it seemed for the audience more because of the [frequent costume changes]. The other soloists beside me were Marietta Marik, Marianna Nagy, Gábor Vida, Gyula Jelfy and Györgyi Botond. The themes were build up from different musicals, operettas, country and Hungarian musics, Gypsy stories and chansons. Each part or duration was about a quarter of an hour. The show had its own orchestra with ten members. We had our own theatre with nine hundred seat places and 10 X 10 meter ice surface." 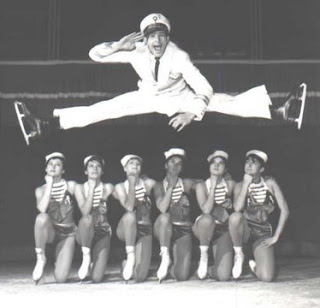 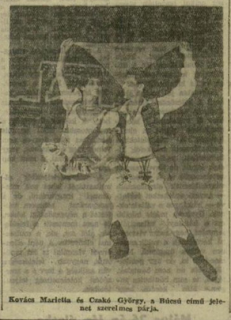 The popular Hungarian skater remained with the ice revue for its entire run. "I stopped performing in 1965 when the show finished," he confirmed. "Then I did the coach exam, and started coaching in a little town south from Budapest. There were a couple of talented skaters and we organized competitions and invited the skaters from Budapest and we went to competitions in Budapest also. My skaters beat the other ones from Budapest often. After two years, I continued coaching in Budapest. My best memories as a coach were when my daughter [Krisztina] became silver medallist at European Championship in 1997 in Paris. She won a Skate Canada in Edmonton also." He also served as President of the Budapest Skating Club for many years and worked as a mechanical engineer.


Czakó reflected amazement as to how the sport has progressed both in Hungary and internationally since the fifties when he competed: "Naturally figure skating developed very much in the whole world since then. There was only two skaters in the world who could jump a double Axel. The one was Olympic Champion Dick Button and the other one was Hungarian Champion Ede Király, the second in the world. Now a double Axel is a compulsory jump for a ten year old skater. There were no triple jumps yet. In the meantime, we had a World Champion couple in ice dancing, a European Champion and two silver medallist winners at the European Championships. We now have successes in short track [speed skating] also." The Hungarian skating world owes a great debt to this man who has worked tirelessly to encourage the growth of skating in his country. The fact his first coach told to go home and never skate again is yet another shining example of one of skating's enduring lessons: there will always be people who have absolutely no clue what they are talking about.

Skate Guard is a blog dedicated to preserving the rich, colourful and fascinating history of figure skating and archives hundreds of compelling features and interviews in a searchable format for readers worldwide. Though there never has been nor will there be a charge for access to these resources, you taking the time to 'like' on the blog's Facebook page at http://www.facebook.com/SkateGuard would be so very much appreciated. Already 'liking'? Consider sharing this feature for others via social media. It would make all the difference in the blog reaching a wider audience. Have a question or comment regarding anything you have read here or have a suggestion for a topic related to figure skating history you would like to see covered? I'd love to hear from you! Learn the many ways you can reach out at http://skateguard1.blogspot.ca/p/contact.html.
Posted by Skate Guard Blog at April 07, 2016
Email ThisBlogThis!Share to TwitterShare to FacebookShare to Pinterest
Newer Post Older Post Home