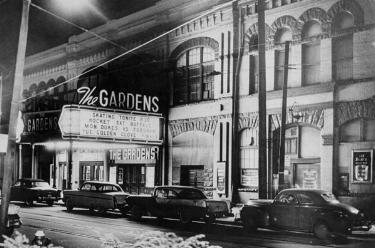 The skating world was in a collective state of shock and despair on November 20, 1995. Skating in a rehearsal in Lake Placid for the upcoming season of Stars On Ice, two time Olympic Gold Medallist and four time World Champion Sergei Grinkov collapsed and died from a massive heart attack at the age of twenty eight. Though tragic and particularly shocking due to Sergei's age, it sadly wasn't the first time something like this happened.

Picture it... Pittsburgh, Pennsylvania, October 24, 1948. The historic Duquesne Gardens skating rink built in 1895 was abuzz with activity. Members of the Pittsburgh Figure Skating Club were honing their school figures for upcoming competitions and perfecting their steps in hopes of passing their next dance test. It was a Sunday morning at the club. Sessions started at nine AM and ran until one PM on Sunday's back in the late forties at the club. The talk of the rink was twenty four year old Ingeborg Nilsson of Norway. After finishing fifteenth at the first World Championships to be held since World War II in Stockholm the previous year, she had come to the club to train in hopes of following in the footsteps of Sonja Henie and taking the Norwegian ladies title. The future four time Norwegian Champion with Reidar Børjeson was also dabbling in pairs skating while she was in Pittsburgh. Her partner that Sunday morning was Dan V. Limborg, a club member thirty years her senior.

Figure skating was fifty two year old Limborg's life. He'd emigrated to America from Norway back in 1912, coming to Pittsburgh eleven years later to help plan and build the Fox Chapel Golf Course. Since 1925, he had acted as the superintendent of grounds at the Veterans' Hospital in Aspinwall. He and his seventeen year old daughter Barbara were both members of the club and skating was his only hobby, one he devoted much free time to. In addition to the Sunday session, he would skate for two and a half hours on the club's Thursday evening sessions and even take to the ice on public sessions for extra practice time. This given Sunday session would sadly be his last. While practicing with Nilsson, Limborg suffered a massive heart attack on the ice and was pronounced dead in the club's locker room by a fellow club member who was a physician. How heart wrenching that day must have been for Barbara and her mother Margaret, who could only look on in the days long before you picked up the phone and dialed '911'.

We all never know when our number is up but in this world of responsibilities and the drudgery of working five days a week to pay the bills, at least we can say in learning about Limborg's story in hindsight that he died doing what he loved. The rink where Nilsson and Limborg were skating that day was demolished eight years later. Nilsson passed away in 1995, the same year as Grinkov... and I'm sure we'll meet them all on a crowded rink session in the sky someday.

Skate Guard is a blog dedicated to preserving the rich, colourful and fascinating history of figure skating and archives hundreds of compelling features and interviews in a searchable format for readers worldwide. Though there never has been nor will there be a charge for access to these resources, you taking the time to 'like' on the blog's Facebook page at http://www.facebook.com/SkateGuard would be so very much appreciated. Already 'liking'? Consider sharing this feature for others via social media. It would make all the difference in the blog reaching a wider audience. Have a question or comment regarding anything you have read here or have a suggestion for a topic related figure skating history you would like to see covered? I'd love to hear from you! Learn the many ways you can reach out at http://skateguard1.blogspot.ca/p/contact.html.
Posted by Skate Guard Blog at May 03, 2016
Email ThisBlogThis!Share to TwitterShare to FacebookShare to Pinterest
Newer Post Older Post Home
"As a rule an author has one or two popular ways of contrasting the past with the present. He can treat the past as lying in comparative doleful ignorance, or he can explain that the past was infinitely superior to the day we live in. Of course, either method is the popular journalism of the moment, and in reality there is no sharp contrast, but a gradual transition which leads the past into the present." - Joel B. Liberman, Skating Club Of New York