When you dig through skating history, you never know what you will unearth. In the spirit of cataloguing fascinating tales from skating history, #Unearthed is a once a month 'special occasion' on Skate Guard where fascinating writings by others that are of interest to skating history buffs are excavated, dusted off and shared for your reading pleasure. From forgotten fiction to long lost interviews to tales that have never been shared publicly, each #Unearthed is a fascinating journey through time. Today's gem comes to you from the February/March 1983 edition of the "Canadian Skater" magazine. It's an interview that British writer Christopher Hilton conducted with the late Betty Callaway, coach of the incomparable Jayne Torvill and Christopher Dean, at the start of the 1982/1983 season before they unveiled their "Barnum" free dance that took them to their third of four European and World titles. Shared with you with the permission and blessing of the good folks at Skate Canada, I think you're going to be fascinated with this inside glimpse into the perspective of one of the most decorated coaches in history. 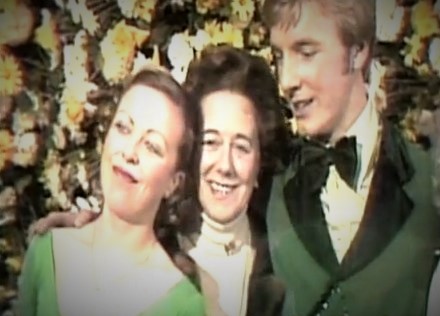 It began in Ottawa four years ago. The exact location: the elevator of a hotel.

It began, as these things often do, with a polite, almost meaningless conversation between two absolute strangers.

Betty Callaway said to Christopher Dean: "Oh hello, I've heard you've been ill. How are you? Do you feel better?"

Police constable Dean was, as Mrs. Callaway remembers, "so painfully shy he just about managed to say 'Yes, thank you.'"

And that was it. She'd first glimpsed Dean and Jayne Torvill at the Europeans at Strasbourg a month before when she was preoccupied with training those respected and admired Hungarians Krisztina Regőczy and András Sallay.

Torvill and Dean? "They look quite interesting, I thought, and really thought no more about it." She'd trained Germans and now the Hungarians and had no particular reason to have seen Torvill and Dean before. The direction of her life had been Continental for a lot of years.

But at Ottawa, during the Worlds, she had the conversation in the elevator (by chance) and then (by chance) first spoke to Jayne Torvill. "On the last night after the free dance I found a dress hanging up. I remembered the color and wondered if it was the British girl's dress. So I took it back to the hotel and it was Jayne's."

A few weeks later, Janet Sawbridge - who was training them at Nottingham - retired and Betty Callaway was asked if she'd take over. "I went up to Nottingham and we met one Thursday morning we said: Let's give it a month's trial."

It began seriously at that moment: A blond policeman on the beat, a petite insurance clerk, a tall English lady who has always loved to teach. Betty Callaway is firm, formidable, kind, understanding and the essence of the English. She has awesome achievements (her couples have won every European and World championships since Dortmund, 1980 in ice dancing) but I don't suppose she's raised her voice, never mind actually shouted at anyone, for a couple of decades.

The story of Torvill and Dean and Callaway is so compelling that it must be allowed to tell itself. Like the skating, it has a power all of its own, an impetus which becomes an inevitability.

"I always knew that they had got something special. But you have to become good friends and you have to become close. It helped a lot having András that first year because they all trained together and became real good pals, and of course András and Krisztina were very polished. Some of that rubbed off. They were very shy but they were dedicated and they knew what they wanted to do. They were also very astute. They learnt by watching."

"Gradually (in fact it was happening month by month) you could see it coming through. András had a ballet teacher in Hungary. He was a great character and a real man, and Christopher learnt that you don't have to look sissy to show your emotions and to show your feelings on the ice."

"We went to Budapest because they had the facilities there and" - note this please - "I thought that if Christopher and Jayne were going to be brought out as people, we had to travel and meet more situations."

"Don't you feel that Christopher had a uniform to hide behind? In some ways a policeman does keep a certain distance from everybody? Being a policeman held him back at the beginning."

"He was so fair-haired and a little bit nervous at championships that he used to look as if he was going to peg out on us, so we insisted that he put some color on his face. But we literally had to sit on him, Krisztina, Krisztina's mother, the British team leader: hold him down to put it on."

"But of course he realized" - Dean and Torvill are quick learners, all right - "and the ballet teacher helped tremendously."

"In Dortmund, it was already beginning to show. They were fourth, third after the compulsories. The first year I had them, they had one or two disappointments in that they could have been fourth but finished fifth, but it was good for them. They couldn't have handled the situation without a little bit more time. In some ways I was pleased they didn't get there too quickly."

"Instead of being a nice little couple from Nottingham" - part of England's backbone, an industrial town associated with coal mining - "they had to be turned into a 'professional', outgoing couple."

I unashamedly interrupt the flow of the story at this point to tell you about Betty Callaway, who foresaw and orchestrated these things. She is 54, began skating at 16, "much too late, and really I would never had made much of a competitive skater." She joined a show to her parents fury (they were paying her school fees).

She sensed she was "cut out" for teaching, and she was right. In time, she took the German couple back to a European title (1972), Regőczy and Sallay to a World title (1980). She also taught Prince Charles and Princess Anne the rudiments of skating. She thinks he might have made a skater.

Now, moving towards Innsbruck and the 1981 Europeans, she had opened up a seam of purest gold. Nobody among the outsiders - press, specators, camp followers - was really prepared for the extent of Torvill and Dean's victory. It was to be the first of many surprises for the outsiders.

They won the Worlds at Hartford and they were around 5.9 in the free for technical, the same mark for impression. Very good, we all thought, very good indeed.

They went away to Bavaria and we all got on with basking in both days of the British summer.

But something had changed. The policeman had left the force to skate all the time, the insurance clerk had put away her ledger for the last time and was now carrying a German phrase book around.

They came to the Europeans in Lyon last year. "They had matured," Betty Callaway says. "They had confidence in their new ideas."

A British dancer helped them. He made Jayne laugh. "She didn't mind wiggling about." - Then, and please do not misinterpret these words - "he helped her to be a little more vulgar."

At Lyon, it was a slaughter. They got fourteen sixes.

At Copenhagen in the Worlds, the slaughter went on: six sixes in the OSP, five in the artistic free. And this before all the Russians had skated.

After the blues, I sat by myself in the rink beside an American woman who was so moved she cried in contorted sobs, all to herself; tried to say something and found noo words. She was lucky. I had to find words for the Daily Express.

Some reflections from Betty Callaway: "They got along incredibly well. Jayne has her feet firmly planted on the ground. Christopher occasionally explodes, mainly because they're both perfectionists, but he must have it exactly right each time."

"Last year after the British nationals, I said: Right, you must have a holiday and get completely away from it. You go on holiday."

"Moiseeva had only one range. Jayne is just an ordinary attractive girl and therefore can go several ways. If she was strikingly sad, she would only have that."

"Fortunately, we have the same taste in music, clothes, everything. I personally like everything we do. You have to make a couple what they are, not what you want." Trainers, everywhere, here is a key to the big door.

"Sometimes Christopher is the dominant one but then Jayne can be the dominant one because she's so steady. I don't think we've ever had a change of tone" - a diffident laugh - "never mind a disagreement." Then, after due consideration: "I think we have a telepathy between the three of us."

"I think I shall probably finish when they finish."

At the time of writing this, we haven't seen the new program, although whispers suggest it makes last year's program look exactly like something which happened a year ago and is now - well, a historical curiosity, dried, embalmed, put away.

Don't leave your television sets for a moment when the championships come around this winter.

The success of Torvill and Dean and Callaway wasn't as easy as the story suggests. It never is.

It was honed. It was sweated over. It was rehearsed in front of mirrors. It made ankles painful because it seemed neverending - always going on towards a creation of perfect human movement; it was spread across a thousand hours of preparation.

In the story are subplots which can never be developed: the relationship between three people, the thousands of hours when each minute brought a problem or a gratification or existed as just another ordinary minute. Somewhere in it all is the gold. Nobody can know exactly where.

Alchemy, of course. A former policeman, a former insurance clerk, a tall lady: this is the chemistry and it might just blow your mind.


Skate Guard is a blog dedicated to preserving the rich, colourful and fascinating history of figure skating and archives hundreds of compelling features and interviews in a searchable format for readers worldwide. Though there never has been nor will there be a charge for access to these resources, you taking the time to 'like' on the blog's Facebook page at http://www.facebook.com/SkateGuard would be so very much appreciated. Already 'liking'? Consider sharing this feature for others via social media. It would make all the difference in the blog reaching a wider audience. Have a question or comment regarding anything you have read here or have a suggestion for a topic related to figure skating history you would like to see covered? I'd love to hear from you! Learn the many ways you can reach out at http://skateguard1.blogspot.ca/p/contact.html.
Posted by Skate Guard Blog at May 31, 2016
Email ThisBlogThis!Share to TwitterShare to FacebookShare to Pinterest
Newer Post Older Post Home
"As a rule an author has one or two popular ways of contrasting the past with the present. He can treat the past as lying in comparative doleful ignorance, or he can explain that the past was infinitely superior to the day we live in. Of course, either method is the popular journalism of the moment, and in reality there is no sharp contrast, but a gradual transition which leads the past into the present." - Joel B. Liberman, Skating Club Of New York