In the first two segments of this three-part look at a century of figure skating fashion, we learned from the writers who chronicled the sport's evolution of the various factors that dictated what people wore to skate; everything from etiquette and societal norms to dressing for the weather to ease of movement. In this final segment, we will  explore how fashion on the ice continued to change in the thirties, forties, fifties and sixties.. and what better way to start than by being taken to school by the late, great fifteen time U.S. Champion Maribel Vinson! 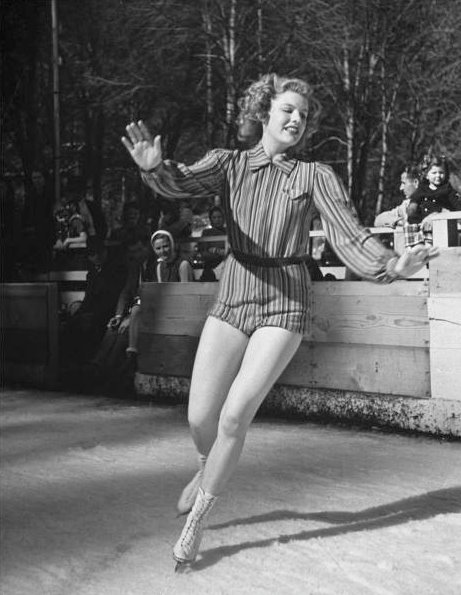 In her book, "Primer Of Figure Skating", Maribel spoke at length with regard to the need for female skaters to follow in her competitor Sonja Henie's footsteps, get with the times and show a little ankle. She wrote that "a long, narrowish skirt will make any woman stand out like a sore thumb on any ice surface, just as a long black skirt would make her an object of special attention on any tennis court... You know how you stare at the little old lady who still wears lavender, lace and a black velvet ribbon around her throat? Well, that is just how people will stare at you if you arrive at the rink or pond in long skirts and froufrou accessories... The accepted style for skating skirts and dresses has a full circular, gored or pleated skirt which flares from the hip line, and this skirt is NEVER below the kneecap. A longer skirt at once stamps you as a 'rabbit' who doesn't know any better. Storekeepers all over the country have complained bitterly for two years that they wished beginning skaters would stop asking for the incorrect skirt length and would take their word for the right costume, so that they in turn could keep only the right thing in stock! And if you happen to find a store that tries to sell you a skirt that is too long and tight and too binding at the hips, don't buy it! As for the rest of the costume, good sense and a certain amount of fashion should dictate. Sweaters with skirts are always good, but if you are going to an indoor rink don't make the mistake, as one of my friends did, of wearing a heavy sweater, stocking cap and fur-lined mitts. Most rinks are heated nowadays, so it is well to inquire first. On the other hand, the trim windbreakers, parkas, and turtle-neck sweaters of the past season were perfect for pond skating. Big hats are out of place on the ice. The closer fitting the cap or turban the trimmer the appearance. Streamlining is as suitable to the skating figure as it is to an automobile chassis... Remember, no skirt at any time should be longer than knee length, and if you are still quite young and have a  reasonably svelte figure your skirts will become shorter as your ability increases." 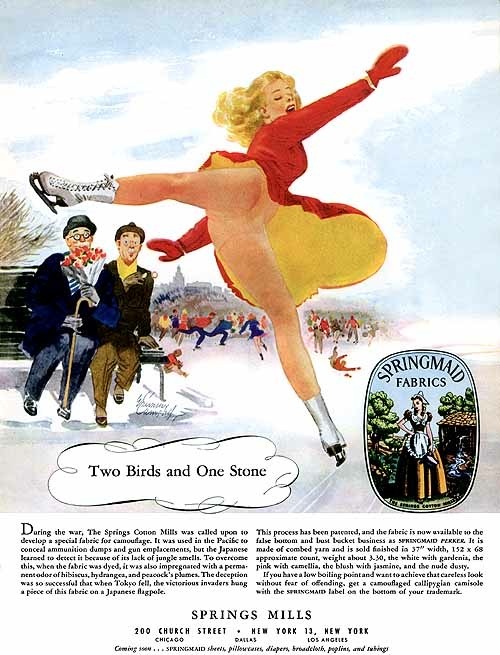 American skating legend Maribel Vinson also opined on men's skating fashion of the era, making it very clear that in competition, tights were an absolute requirement and noting the wider availability of off-the-rack fashions suitable for competitive male skaters: "For men there are now well-cut, tight-fitting special skating trousers on sale at several metropolitan stores and specially cut tight-fitting jackets. For the average male figure skater at an average practice session short knickers (never plus fours) are probably the easiest and best. For competition black or dark-blue tights are de rigueur. Some rinks make the wearing of coats compulsory, but outdoors sweaters are of course best. Almost every man looks far handsomer on the ice with a belt over his sweater and a scarf around his throat than he does sans belt and sans scarf. Gentlemen readers, take this lady skater's opinion for what you think it is worth!" 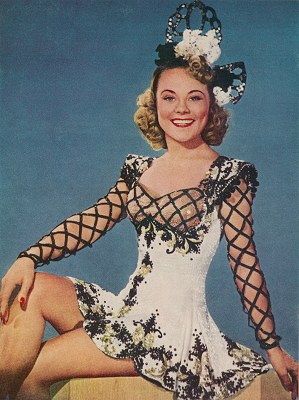 World War II resulted in a need for skaters to be costumed more economically and there are countless tales of many European skaters in this era sporting hand me down dresses and shabby tights. Yet, the influence of the glitz and glamour of show skating's boom in the thirties brought more skaters to the ice than ever before. Sonja Henie, in her short, showy costumes, became the poster child every young female skater wanted to be - and dress like. Noting this change, the Ottawa Citizen in a  March 7, 1941 review of a Minto Follies show recorded that "costumes had some sleeves or none at all, depending on the type of costume and not on the temperature. Nobody froze. Skirts descended as far as the ankles, the farthest they could go and still not trip up the skater. They also climbed higher, still modish and suited to the part until they reached sensible chorus-girl brevity." 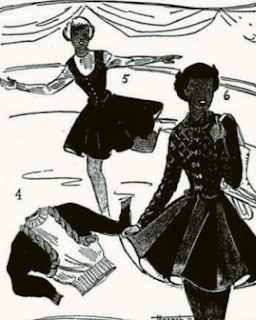 Just as female skaters emulated Sonja Henie in the thirties and forties, in the early fifties everyone wanted to dress like Barbara Ann Scott. However, in reality, the majority of figure skaters during this period were remarkably conservative in their costume choices. A stock video called "Ice Skate Fashions" from this era describing appropriate skating wear at Rockefeller Skating Pond mentioned a "one-piece rayon skating dress as being just right for the occasion", a green cotton cordouroy jacket and skirt ensemble with a Dutch cap, jacket and pleated skirt sets and a cotton tweback velveteen vest and skirt with matching cap. Tights were by this era falling out of vogue among men and being replaced with jackets and trousers. Although clothes rationing ended in Great Britain in 1949, a shaky economy meant that many parents simply didn't have the funds to gussy up their young skaters in the latest fashions, although shops certainly kept ready made skating wear in stock. 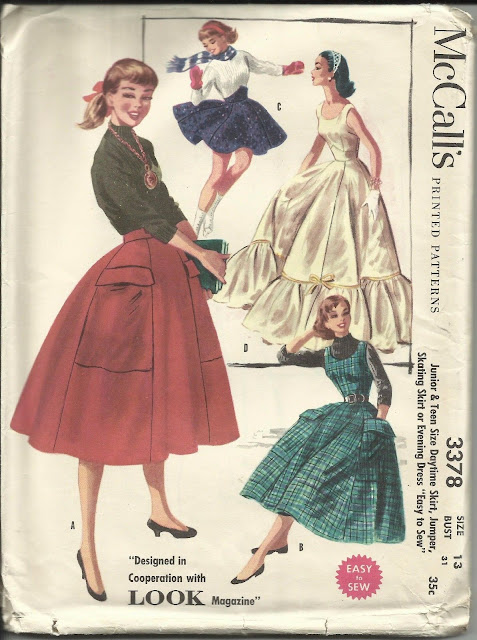 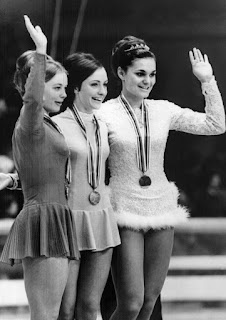 As a guide to our final decade of skating fashion, we will turn to Howard Bass, who wrote extensively on the subject in his wonderful 1968 book "Winter Sports". Remarking on appropriate wear for school figures specifically, Bass noted "whether in ordinary practice or competitions, it is best not to wear too full a skirt that might billow out enough to obstruct one's vision of the tracings. Barbara Ann Scott used to favour a plain and simple, free fitting tailored dress of a blue-grey doeskin material, with long sleeves and several large pleats in the skirt to hold it down, and sometimes a belt around the waist." With regard to free skating fashion for women, Bass stated that "if the weather is warm enough, bare legs look and feel better, but woollen stockings or tights should be worn in the colder weather, and at all times a pair of light ankle socks... Anything accentuating a general streamline effect and which at the same time allows full freedom of movement should be the guiding factor. Close-fitting beret-type headgear, if any, is best. The bodice should be close fitting, yet with enough allowance across the shoulders to allow for ease of arm movements. Bloomers should normally match the skirt and not be bulky. For colder winter wear, opera-length silk, nylon or wool skating stockings have now become the vogue... Crepe and other elastic materials are obviously ideal for retaining shape while allowing full freedom of movement. Chiffon and lame are much favoured materials, with sequins and other decorative trimmings used in many imaginative ways... Generally speaking, the simpler and brighter the colour of the costume the more pleasing the effect."

Bass also chronicled the evolution of men's fashion during the sixties: "Men normally begin to skate in long trousers and an ordinary jacket or sweater. I suppose it is still useless yet to advocate for a fashion for shorts in this sport as it used to be in tennis; yet in suitable temperatures shorts would prove the more practicable and comfortable wear, giving a greater ease of movement which girls have enjoyed for decades. Special tighter-fitting trousers and short, smartly cut jackets are favoured by many of the more seasoned male performers. In competitions a more enterprising demand for variation of colour is a welcome current trend away from the outmoded traditional black, and several leading skaters have been admired and respecting for sporting, for example, a white tuxedo with dark trousers. A club badge on the breast pocket adds a smart finishing touch."

However conservative the clothing worn by most skaters during this era, there were risk takers like Jacqueline du Bief, for instance. At the 1962 ISU Council meeting in Portofino, Italy, 'decisions' ('not rules') were made on dress, reminding skaters to wear dignified, conservative costumes and not "brief, flashy costumes better suited to a carnival or ice show". The Council also expressed disdain that male pairs skaters and ice dancers were "attempting to match the costume of their partners, even including sequins and similar decoration." These 'decisions' even asked female judges to refrain from wearing trousers, "if possible." This 'old school' mentality towards skating fashion pervaded and as skaters pushed, the ISU pushed back.

Like in some sort of a time warp, that's where we will abandon our adventure in skating fashion history. It's incredible to try to wrap one's head around just how much what people have worn over the years has made an impact on how they have skated, and vice versa. The bottom line as far as I'm concerned is that a VARIETY of clothing choices, even today, is what makes skating visually appealing and so unique. Fashion has allowed skaters not only the opportunity to express their individuality but like actors, to aid in telling a story. If we think about how important that is, A 2014 Washington Post article attempted to make the ludicrous argument that the best way to eliminate bias in figure skating judging would be do away with costumes altogether and require skaters to all wear the same thing. To me, this was a prime example of how a lack of education about skating's history can lead to ignorance about its present situation. Ever unique, figure skating is NOT gymnastics nor should it ever be viewed with that lens... and we have its unique fashion history largely to thank for that.

Skate Guard is a blog dedicated to preserving the rich, colourful and fascinating history of figure skating. Over ten years, the blog has featured over a thousand free articles covering all aspects of the sport's history, as well as four compelling in-depth features. To read the latest articles, follow the blog on Facebook, Twitter, Pinterest and YouTube. If you enjoy Skate Guard, please show your support for this archive by ordering a copy of the figure skating reference books "The Almanac of Canadian Figure Skating", "Technical Merit: A History of Figure Skating Jumps" and "A Bibliography of Figure Skating": https://skateguard1.blogspot.com/p/buy-book.html.
Posted by Skate Guard Blog at June 25, 2016
Email ThisBlogThis!Share to TwitterShare to FacebookShare to Pinterest
Newer Post Older Post Home