When you dig through skating history, you never know what you will unearth. In the spirit of cataloguing fascinating tales from skating history, #Unearthed is a once a month 'special occasion' on Skate Guard where fascinating writings by others that are of interest to skating history buffs are excavated, dusted off and shared for your reading pleasure. From forgotten fiction to long lost interviews to tales that have never been shared publicly, each #Unearthed is a fascinating journey through time. This month's #Unearthed is a wonderful article written some years ago by BIS  historian Elaine Hooper about judging pioneer Mollie Phillips. 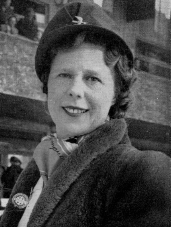 The name Mollie Phillips does not immediately spring to the mind of most of today's skaters when considering those who have forged the way forward in our sport. However, to quote the "Skating World" of October 1957: "Mollie Phillips is one of the best known and popular personalities in the sphere of national and international competitive skating". Who, then, was Mollie Phillips and what made her so high profile in the 1950's and how is she relevant today?

Mollie was born in London on 27th July 1907 and was brought up between the family homes in London and Wales. She went on to study law at Lincoln's Inn and qualified as a barrister but although she did not practice, she always retained a flat in Lincoln's Inn. This affords us an insight of the tenacity of this special lady, that brought her into conflict with many in the early days. When her competitive skating career ended she achieved so much more.

It appears that Mollie liked to be innovative and was not afraid to take on the established protocols of British skating hierarchy. Women in all aspects of skating administration are commonplace today but when Mollie tried to make her way it was definitely a man's world.

A gutsy personality helped her in her task and she certainly needed it. Her friends describe her as dedicated, passionate and fervent. All these qualities helped her to a number of notable "firsts".

A significant event during the 1930's started the ball rolling. As a skater Mollie had risen through the ranks in the 1920’s and by the 1930's she was unmistakably noticed for attention to music and interpretation. But then she found a pairs partner in Rodney Murdoch, she trained with him at the Westminster Ice Club, Millbank, which, until the late 1930's was a private skating club rather than a public ice rink. Although mainly concentrating on pairs she had passed the NSA gold medal test and also reached silver in Ice Dance (There was no gold dance test in the early 1930's) and in 1932 she made her World Championship debut finishing 9th in the ladies event. Mollie and Rodney Murdoch quickly found success, placing 2nd in the 1932 British Championship and then taking the title the following year. Mollie and Rodney followed this up with the Bronze medal in the 1933 European Championships, where Mollie also came 7th in the Ladies event, won by the great Norwegian Sonja Henie. In singles she was runner up to Cecilia Colledge in the 1936 British Championship. 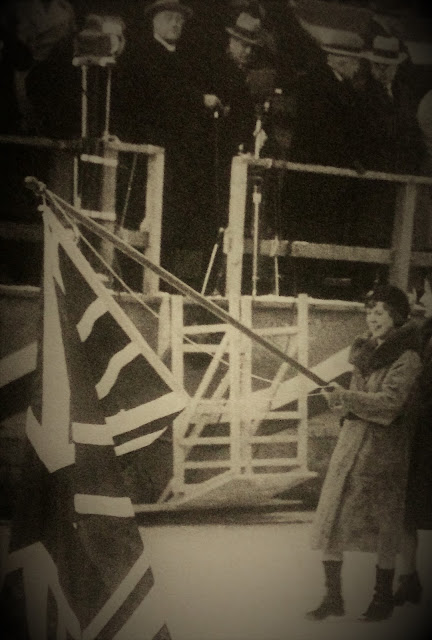 This success resulted in selection for 2 successive Olympics Winter Games and with it that significant event, Mollie was selected to be the flag bearer, ensuring her a place in British Olympic history as the first lady to carry the British flag at an Olympic Games Opening Ceremony. Former British and
international judge, Joan Noble, recalls that she was immensely proud of this and mentioned it often.
By the late 1930's Mollie had retired from competitive skating and moved on to judging. This tenacious lady then really embarked on her mission to break into the man's world of British ice skating administration!

It would be fair to say that, at the time, most British judges were mature of age and the majority were male. Mollie, as she expected, proved capable and, at the time, was the youngest judge to be appointed by the NSA. Having this success under her belt she focused on the administrators and was determined that younger members should have some input into how the sport was run.

Having gathered some support, in 1938, she enraged the gentlemen of the National Skating Association by standing for election to the all male NSA Council! There followed a great debate as to the eligibility of ladies to be Council Members. It had not been envisaged that ladies would stand for election and so it was not deemed necessary include a rule regarding the gender of candidates. Her name was duly accepted but she did not achieve the required number of votes needed and was not elected. Undeterred, Mollie, supported by the younger generation, was proposed again and at the NSA AGM of July 1939, held at the Victoria Hotel in London, she was elected and it made headlines, for no woman had held a seat on the Council or served on one of the committees during the 60 years of the Association's existence.

The press of the time suggested that this was a revolt by the younger members who felt "the Council consists of old fogies who have been in power since the year dot and are not conversant with modern skating conditions."

If it was a revolt then Mollie was their champion. As she was qualified in singles, pairs and dance Mollie soon became a busy judge. Her quality was such that she could not be ignored by “the old fogies” on the council who had been forced to recognise the need for change. So much so that her name was put forward to the ISU, resulting in the distinction of being the first British lady to be appointed to the ISU international judging panel. From there she achieved some more very notable and important firsts.

Fittingly after having carried the British flag at an opening ceremony she was also the first British lady to judge at an Olympic Winter games and also the first British lady to act as assistant referee and subsequently referee at an international competition. However her most significant breakthrough came in 1953 when she was the first ever female to referee a World Championship event when she was appointed referee for the Ice Dance Championship.

In fact it was not just in the 1950's that Mollie remained high profile. It extended through to the 1960's and 1970's to the 1980's. Her judging career spanned all these decades. Her friend, Gordon Chamberlain remembered, that latterly, she gained a reputation for being a bit absent minded but was very popular with her fellow judges. They considered it part of her charm and remembered that Mollie had contributed so much to emancipate women in becoming acceptable as administrators and adjudicators in British skating. The Welsh ice Skating Association remembered this, in 1984, when they made her their first president.

You may think that with such a busy skating schedule that Mollie would have little time for anything else but nothing could be further from the truth. Her life was very fulfilling. Among other activities she was dedicated the Girl Guide movement and ultimately became a County Commissioner for the Girl Guides. She was also on the London Committee for the YMCA and dedicated much time to her responsibilities as a magistrate. In the late 1940's Mollie took over the large family dairy farm, near Lampeter, and later was known as a notable cattle breeder. Friends recall her driving around the farm in the snow, in her old Ford Zephyr, with bales of hay in the boot, dropping them at intervals for the cattle. More accolades were to come. In 1961 she was the first female High Sheriff of Carmarthenshire. Mollie even found time to be a member of her local police authority.

It would be hard to imagine our sport today without female judges, NISA board or sub group members but there had to be a pioneer to pave the way for them and that pioneer was Mollie Phillips.

n.b. Mollie Phillips died on 15th December 1994. ISU records do not support Wikipedia on the year of Mollie's World Championship Refereeing debut; however she was a judge at the event in the year they suggest.

Skate Guard is a blog dedicated to preserving the rich, colourful and fascinating history of figure skating and archives hundreds of compelling features and interviews in a searchable format for readers worldwide. Though there never has been nor will there be a charge for access to these resources, you taking the time to 'like' on the blog's Facebook page at http://www.facebook.com/SkateGuard would be so very much appreciated. Already 'liking'? Consider sharing this feature for others via social media. It would make all the difference in the blog reaching a wider audience. Have a question or comment regarding anything you have read here or have a suggestion for a topic related to figure skating history you would like to see covered? I'd love to hear from you! Learn the many ways you can reach out at http://skateguard1.blogspot.ca/p/contact.html.
Posted by Skate Guard Blog at June 30, 2016
Email ThisBlogThis!Share to TwitterShare to FacebookShare to Pinterest
Newer Post Older Post Home