Ája Vrzáňová, Jeannette Altwegg, Jacqueline du Bief, Tenley Albright, Gundi Busch, Carol Heiss... these 6.0 talented women each stood upon the top of the podium at the World Figure Skating Championships in the fifties. History loves to remember its champions and rightfully so! However, the fascinating stories of many talented young women who rose to fame in their own respective countries during the decade of 'Carol versus Tenley' have been largely forgotten in the sands of time. Today, we'll meet four forgotten fifties ice princesses whose stories absolutely deserve a mention: 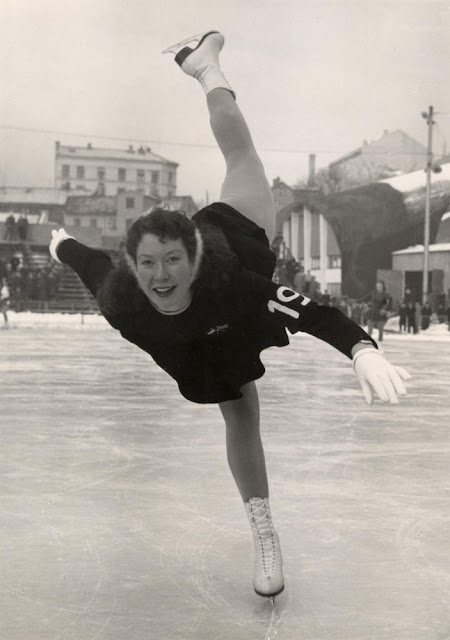 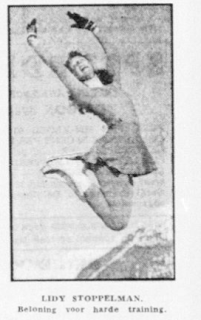 Born July 3, 1933 in Amsterdam, Alida Elisabeth (Lidy) Stoppelman spent much of her youth in The Netherlands studying dance. Translating her prowess on the dance floor to the frozen stage, she divided her winter training time between Amsterdam and The Hague. Summers were spent in England playing tennis and training under legendary coach Arnold Gerschwiler. At the age of seventeen in 1950, she won her first medal - a bronze - at the Dutch Championships. The following year, she defeated Holland's reigning champion Reitje van Erkel to claim her first of three consecutive Dutch titles. After finishing second in an international competition in England behind Yvonne Sugden, in 1952 she made history as the very first woman in history to represent her country in figure skating competition at the Olympic Games. Although she placed a disappointing twenty second at the Oslo Games, her pioneering effort paved the way for women like Sjoukje Dijkstra and Dianne de Leeuw to compete and medal in the Olympics. After winning a bronze medal in the Richmond Trophy and cracking the top ten at the European Championships, Stoppelman ended her short but sweet competitive career abruptly in 1954 when she finished fourth in the figures at the Dutch Championships behind three younger skaters (Nelly Maas, Joan Haanappel and Dijkstra) and decided to call it quits before the free skating. She married Briton Jack Leonard Mason and taught skating in Davos, Switzerland and at the Houtrusthallen, the first indoor rink in The Netherlands.

The daughter of attorney Alfred Bursche, Anna Bursche-Lindnerowa was born on August 6, 1922 and grew up on a villa close to the border of Konstancin, near Warsaw, Poland. Her first career wasn't as a skater, but as an Army liason during World War II. In a May 7, 2010 article in "Poradnik budowlany", Anna's nephew Alexander described her harrowing escape from captivity during the War: "Immediately after the capture by the Germans in Warsaw, all the male Burschów family was arrested - on Hitler's personal order. The brother of the owner of the house - the bishop of the evangelical church of Ausburg - was taken to Berlin and lost there. He was imprisoned in the Sachsenhausen concentration camp, where he died two years later. His widow spent the occupation in a villa near Warsaw. Here, too, she found the outbreak of the Warsaw Uprising. My father and his sister Anna Bursche Lindnerowa (multiple Polish champion in figure skating on ice) belonged to the Army - tells the owner. My father, as a soldier, fought in Mokotów. My aunt was a liason. After the surrender, like most of Warsaw, they were in a transit camp in Pruszkow, from which she managed to escape. After two days of hiking through fields and woods, without shoes, that had somewhere been lost, with [injured] feet got she home... But war and turmoil here has left its mark. In the countryside bombs fell, in front of family members, at the front entrance. Fortunately, [they were] a small caliber, but traces of the explosion are still visible on the door." After surviving her horrific escape, Anna won five consecutive Polish women's titles from 1949 to 1953. She then switched to pairs skating, claiming another three National titles with partner Leon Osadnik. Finally, she gave ice dancing a try and made history as Poland's first ice dance champion. Although Anna's only trip to a major international competition was a last place finish in the pairs event at the 1955 European Championships, she penned the Polish language book "Lyzwiarstwo figurowe w szkolnym klubie sportowym" ("Figure Skating In The School Sports Club") in 1957 and went on to coach in Warsaw.
Among her students were nine time Polish Champions Teresa Weyna and  Piotr Bojanczyk. She married actor, director and fencing instructor Slawomir Lindner, who himself was imprisoned in a P.O.W. camp in Woldenburg during the World War II occupation of Poland, and passed away on August 21, 2002 at the age of eighty. 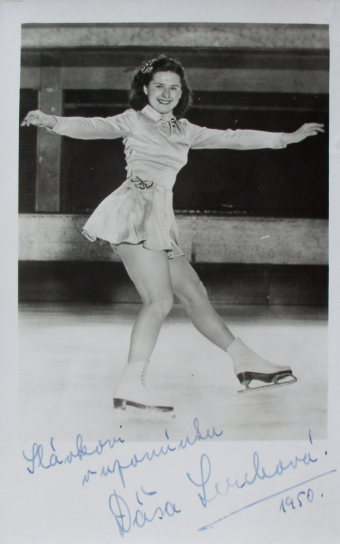 Born October 22, 1930, Dagmar Lerchová was raised in Holešovice, a suburb in northern Prague. Her parents skated on the frozen Vltava river and as a girl, she attended the nearby Štvanice rink, where she'd try to emulate the better skaters as they gracefully flew by. When it became clear she had a passion and a knack for skating, she started receiving formal training. However, like many European skaters during that era, her skating career was interrupted by World War II. After the War ended, she resumed training and made her international debut at the first post-War European Championships in 1947, where she finished a respectable eleventh of the nineteen competitors. The following year, she moved up five spots to sixth and earned a trip to the 1948 Winter Olympics in St. Moritz. Had it not been for a disastrous fifteenth place finish in the school figures, she would have placed in the top ten in only her second international competition. Although she skated in the shadow of Ája Vrzáňová and Jirína Nekolová, when both of her compatriots defected she rose to prominence as her country's leading hope. Lerchová claimed three consecutive Czechoslovakian women's titles from 1953 to 1955 and proved herself as a superb free skater  - even twice placing as high as fifth at the European Championships - but despite twelve tries, she ultimately failed to reach an international podium. After retiring, she got married, taught English, served as an international judge and referee and gave birth to ice dancer Liliana Střechová (Řeháková), who placed fourth at the 1980 Winter Olympics in Lake Placid with partner Stanislav Drastich. Sadly, Dagmar outlived her daughter, who passed away suddenly in 2008. As of 2012, she was living in an assisted living facility in Praha and devoted her time to art and singing. 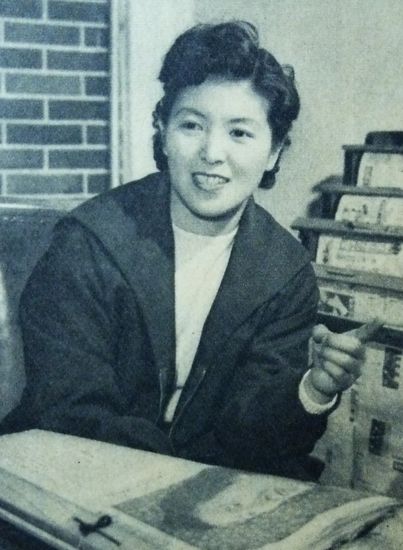 Born in 1929, Tsuyako Ikuta began skating at the age of six in Osaka, Japan under the tutelage of Yasuzo Nagai. Incredibly, only three years after she took her first cautious glides on the ice she won Japan's junior title. Although she skated in the shadow of Etsuko Inada and Yoshiko Tsukioka early in her career during World War II, she claimed four medals at the Japanese Championships between 1941 and 1951, even training during blackout conditions at risk of air raids. Taking a break from the sport following the 1951 Japanese Championships in Tokyo, she returned to the skating spotlight in 1954 as a graduate of Kwansei Gakuin University... and a married mother of two! Despite medalling at the Japanese Championships during two Olympic years, she sadly never had a chance to compete internationally due to post-World War II bans on Japanese athletes. She retired from competitive skating after winning two Japanese titles in 1944 and 1955, coached both of Yuka Sato's parents and helped establish the All Japan Figure Skating Instructors Association with Etsuko Inada and several others. In 1968, the loss of her own Olympic dream was vindicated when her eldest daughter Kazumi Yamashita - a four time Japanese Champion in her own right - qualified for the Grenoble Games. She continued to coach in Osaka until 2003.

Skate Guard is a blog dedicated to preserving the rich, colourful and fascinating history of figure skating and archives hundreds of compelling features and interviews in a searchable format for readers worldwide. Though there never has been nor will there be a charge for access to these resources, you taking the time to 'like' on the blog's Facebook page at http://www.facebook.com/SkateGuard would be so very much appreciated. Already 'liking'? Consider sharing this feature for others via social media. It would make all the difference in the blog reaching a wider audience. Have a question or comment regarding anything you have read here or have a suggestion for a topic related to figure skating history you would like to see covered? I'd love to hear from you! Learn the many ways you can reach out at http://skateguard1.blogspot.ca/p/contact.html.
Posted by Skate Guard Blog at August 02, 2016
Email ThisBlogThis!Share to TwitterShare to FacebookShare to Pinterest
Newer Post Older Post Home
"As a rule an author has one or two popular ways of contrasting the past with the present. He can treat the past as lying in comparative doleful ignorance, or he can explain that the past was infinitely superior to the day we live in. Of course, either method is the popular journalism of the moment, and in reality there is no sharp contrast, but a gradual transition which leads the past into the present." - Joel B. Liberman, Skating Club Of New York