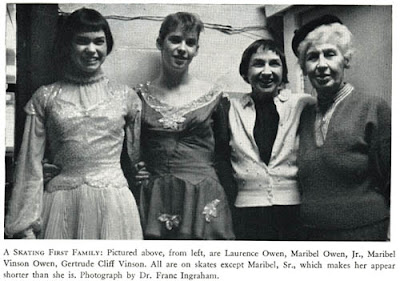 Photo courtesy "Skating" magazine
They say that no parent should ever have to bury their own child. Horrifically, as a result of the 1961 Sabena Crash that killed the entire U.S. figure skating team, not only did Gertrude Vinson have to bury her daughter... but also both of her granddaughters. However, her courageous story of perseverance during a time that would break most of us is one that so few really know.

Born July 22,1880 to Dr. Leander and Mary Belle Cliff, Gertrude Yerxa Cliff graduated from Radcliffe College, a women's liberal arts college in Massachusetts, magna cum laude in 1902. In her book "Advanced Figure Skating", Gertrude's famous daughter Maribel Vinson Owen recalled, "Mother... typified the skating belle of the outdoor rinks; the ponds, lakes and rivers. If fine 'black' ice were reported anywhere near, she would skip a class any day to pursue her merry course of Dutch rolls and great lilting strokes over miles of the local iceways. Sometimes, too, though she never tried a figure eight in her life, she would dance an ice 'valse' as it was then called." Gertrude skated regularly on the frozen Charles River and at the Cambridge Skating Club and it was on the ice that she met her husband, Thomas Melville Vinson, an accomplished skater who had gone head to head with the top Canadian skaters of his era in 'fancy' skating competitions. During World War I when their only child Maribel was but an infant, the happy couple joined the Skating Club Of Boston, taking lessons from a German coach named Herr Schmidt. They both soon warmed to the new International Style of skating and by the time Maribel started to compete, Gertrude was something of an expert in school figures despite never having done them herself.

In 1938, after Maribel had won an incredible fifteen gold medals at the U.S. Championships and an Olympic bronze medal, she married Canadian skater Guy Owen at Gertrude and Thomas' home 'the Locusts' in Winchester. Maribel and Guy gave her parents two granddaughters, Laurence and Maribel, who too went on to become U.S. Champions. Both Maribel's and Laurence, as we know all too well, sadly perished on that fateful plane crash in Belgium in 1961.

When news reached America of their deaths, Gertrude was ready to have breakfast. Her cousin Catherine Yerxa arrived and sat her down to eat but the phone kept ringing off the hook. Catherine told Gertrude that the plane had made a bad landing, and Dr. Hollis Albright (the father of 1956 Olympic Gold Medallist) and Gertrude's rector, Rev. Dr. John W. Ellison, stood outside the front door, debating how they'd break the news. Dr. Albright entered, gave her a sedative and told her there had been a crash. She asked, "Are they all dead? Tell me the truth. Don't keep anything from me." The doctor nodded yes. She reportedly responded, "I mustn't cry. My father told me I should never cry" and went upstairs to her bedroom.

Then something remarkable happened. In the midst of her grief, Gertrude took to the rink and became something of a fixture at the Skating Club Of Boston. She even began watching Maribel's former students and offering words of encouragement. Every gathering, every chance to be around others... she was there. In her wonderful book "Indelible Tracings", Patricia Shelley Bushman recalled, "The rink was the lifeline to her family. She always received lots of love and attention. In turn, many people visited her in her home and took care of her."

Dr. Hollis Albright recalled, "We were in a state of shock, frozen, not knowing which way or where to turn. It was Grammy who snapped us out of it. She did what all of us should have done. She turned her grief into something constructive - she started working with the young skaters. She is an amazing, marvellous creature. I have never seen anyone like her." Mrs. Louis Goldblatt said, "Grammy was out there every day hanging over the rails. She would examine the tracings with that sharp eye of hers, offer helpful hints and tell the kids what Maribel would have said." Reporter Will Grimsley noted that she moved "with the quickness of a 20-year-old", that she could "spot a flaw on a figure from 50 feet" and that she could "talk skating techniques with the best of them."

In her own words on her decision to come back and assist with her daughter's former students, Gertrude Vinson said in the "Spokesman-Review" that "Maribel wouldn't have wanted us to mope around and feel sorry for ourselves. She was one of the most vivacious persons I ever saw. Figure skating was her life. She would have said, 'Let's get up and get going'. That's what I intend to do."

Despite the support Gertrude received from members of the Skating Club Of Boston, the image painted by some contemporary journalists of her life in the wake of the Sabena crash was one of an isolated woman surrounded by sad memories. A February 11, 1962 article in the "Spokesman-Review" noted that she lived "alone with a Negro maid in the big onetime farm house, which has 14 rooms and six baths. Once the Vinson homestead sat in the middle of 62 heavily wooded acres but now all but four of those acres have been sold for home development. Inside, there is a small trophy room glistening with cups and medals won by her husband, Thomas M. Vinson, a lawyer who died in 1952 at the age of 84; by daughter Maribel, who for years was the chief rival of the great Sonja Henie, and more recently by her illustrious granddaughters. On one wall hangs a large, blown-up photograph of Maribel and daughters Laurence and Maribel, taken on the steps of the giant airliner moments before it took off from Ildewild on its ill-fated journey." However, other accounts noted her steadfastness, describing how she often got up at five in the morning and painted the interior of her massive brick and clapboard house without any help. Reflecting on her late husband's skating career, she told Will Grimsley, "He was a wonderful skater. Maribel was just like him. So were Laurence and little Maribel. I didn't skate competitively, but I could cover a pond in no time." On Maribel's silver medal finish behind three time Olympic Gold Medallist Sonja Henie at the 1928 World Championships in London, she remarked, "I would never say it, but others have said that Maribel should have won. Many people thought Sonja was a professional. She brought along a whole retinue of coaches and handlers with her. I only know that she was very cute, with those big flashing eyes and that turned-up nose. Nobody was going to beat her."

In the years following the tragedy as her health declined, members of the Skating Club Of Boston helped move Gertrude Vinson into a nursing home where she passed away at age eighty-nine on October 2, 1969. She is interred in Mount Auburn Cemetery in Cambridge, Massachusetts with her daughter and granddaughters.

This woman's decision to not only go on when the world couldn't have been any darker but to go back to that rink and work with Maribel's students... it just gets you. I can tell you that if I was in her shoes, as much as I might have wanted to do it, I don't know if I could have. Brave is not the word! I think it was Will Grimsley who said it best: "While the load of her sorrow must have weighed like a ton on her frail, aging shoulders, Grammy, alone and her world shattered all around her, never once showed it."

Skate Guard is a blog dedicated to preserving the rich, colourful and fascinating history of figure skating. Over ten years, the blog has featured over a thousand free articles covering all aspects of the sport's history, as well as four compelling in-depth features. To read the latest articles, follow the blog on Facebook, Twitter, Pinterest and YouTube. If you enjoy Skate Guard, please show your support for this archive by ordering a copy of the figure skating reference books "The Almanac of Canadian Figure Skating", "Technical Merit: A History of Figure Skating Jumps" and "A Bibliography of Figure Skating": https://skateguard1.blogspot.com/p/buy-book.html.
Posted by Skate Guard Blog at February 15, 2017
Email ThisBlogThis!Share to TwitterShare to FacebookShare to Pinterest
Newer Post Older Post Home