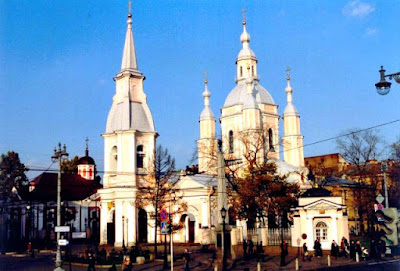 Bordered by the Bolshaya Neva, Malaya Neva and Smolenka Rivers and the Gulf Of Finland, Vasilyevsky Island is a historic island in St. Petersburg, Russia. Just across the river from the Winter Palace, today it is home to over two hundred thousand citizens, several museums... and two historic churches, St. Andrew's Cathedral and the Church Of The Assumption Of The Blessed Virgin.

St. Andrew's was in fact the last Baroque cathedral built in the city. First conceived by Peter The Great, the cathedral went through three incarnations, a fire and a collapse before being consecrated in 1870. Following the Russian Revolution in 1917, the cathedral was handed over to the revisionists. Just over twenty years later, it was closed down, its priests arrested, valuables ransacked and bells destroyed. Abandoned, it fell into disrepair but was later resurrected. My initial research had led me to incorrectly believe that this church played host to an (unlikely) ice rink. A reader named Emily pointed out that based on photographs and articles pertaining to the Church Of The Assumption Of The Blessed Virgin, it was clear that it was this rink that housed the rink in question.

In a 2014 interview with Olga Ermolina for The Figure Skating Federation Of Russia, legendary coach Tamara Moskvina explained, "The fact that the church was constructed [as an] ice rink sounds blasphemous, but for the time use of abandoned churches was justified. Three parents of students from our group decided to make a skating rink in the church building. These parents weren't high-ranking officials, they were just active people. On their own initiative these people contacted the institute which [was] engaged in the development of refrigeration units. They went to meet him [and] made the necessary equipment that was placed in the basement of the church. Parallel to this was the rink, a non-standard 17 X 17 meters. And in 1958, it held its grand opening."

The rink operated as a training base for over two decades and played host to a who's who of Soviet skaters over the years including Ludmila and Oleg Protopopov, Nina and Stanislav Zhuk, Tamara Moskvina and Alexei Mishin, Igor Bobrin, Yuri Ovchinnikov and Anton Sikharulidze.

Ever wonder why Soviet skaters always seemed to have the edge back in the sixties, seventies and eighties? Perhaps it's owing to the fact that if they wanted to pray to the Skate Gods, they were practicing in the right place!

Skate Guard is a blog dedicated to preserving the rich, colourful and fascinating history of figure skating and archives hundreds of compelling features and interviews in a searchable format for readers worldwide. Though there never has been nor will there be a charge for access to these resources, you taking the time to 'like' on the blog's Facebook page at http://www.facebook.com/SkateGuard would be so very much appreciated. Already 'liking'? Consider sharing this feature for others via social media. It would make all the difference in the blog reaching a wider audience. Have a question or comment regarding anything you have read here or have a suggestion for a topic related to figure skating history you would like to see covered? I'd love to hear from you! Learn the many ways you can reach out at http://skateguard1.blogspot.ca/p/contact.html.
Posted by Skate Guard Blog at March 02, 2017
Email ThisBlogThis!Share to TwitterShare to FacebookShare to Pinterest
Newer Post Older Post Home