The Legendary Night Of Figure Skating 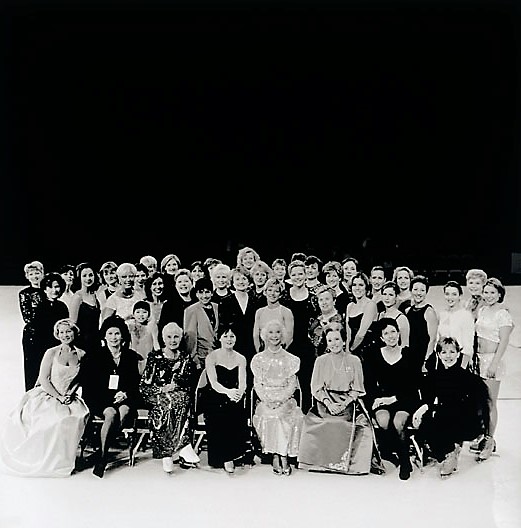 On March 2, 1999, history was celebrated and made in Toronto, Ontario, when a who's who of Canadian figure skating took to the ice at the inaugural ice show at Air Canada Centre in a show called The Legendary Night Of Figure Skating. Held as part of the facility's opening ceremonies, the mammoth effort celebrated Canada's rich figure skating history. The event was sponsored by AOL Canada, Doulton Fine Fragrance Collection and The Bay and Wittnauer Fine Swiss Watches. 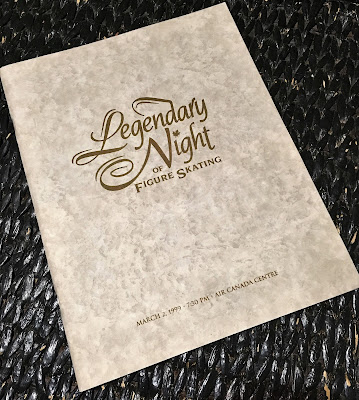 The Legendary Night Of Figure Skating came about when IMG Canada approached Sandra Bezic and asked her to produce and choreograph the show. She enlisted Michael Seibert as a co-director. Wayne Abbott edited the biographies in the show's program; Marvin Dolgay worked his magic with all of the music. Every living medallist at the Canadian Championships was invited to participate, along with several 'stars of tomorrow' scouted by the CFSA. Quoted in the February 17, 1999 issue of "Blades On Ice" magazine, 1948 Olympic Gold Medallist Barbara Ann Scott remarked, "It is a great honour to think that this unique event is being held for Canadian skaters, former, present and future... We are all looking forward to meeting skaters and friends we haven't seen in years. This will be a memorable event."

A memorable event it was. A crowd of eighteen thousand attended the star-studded gala and a portion of the proceeds were donated to the CFSA for skater development. Live performances were interspersed with historical video footage. Performers included Brian Orser, Sheldon Galbraith, Osborne Colson, Donald Jackson, Liz Manley and Josée Chouinard and circular stages were set up around the ice for speakers to introduce performances and educate the audience on the accomplishments of the illustrious alumni of Canadian skating in attendance. I spoke with Sandra Bezic about the show. She recalled, "For me, that show was a labour of love. I wanted to honour all the Canadian Champions in the best way possible, and give them their proper due. For many, it had been years and years since their accomplishments were acknowledged. We seated them all together across the downstage platform and I will never forget their tearful reactions during dress rehearsal when they first saw their biographies we had woven throughout the show... I'm pretty sure Brian Orser opened as Louis Rubenstein. We tried to get him to skate on late 1800's blades, but I don't remember if that came to fruition.  I talked Osborne Colson into performing!  He had agreed, then pulled out, then finally after much cajoling - begging - he showed up and was magnificent! Toller was another I talked into performing. It was the first time I met a young dance team - Marie France and Patrice. I was blown away by them and thought 'these two are special!' Every one of the champions who could and wanted to, skated out in the finale. Almost everyone did! Everyone got their full title announcement. So fun. Val and I did a back inside death spiral." A highlight of the event was a torch-passing ceremony where champions of yesterday passed the baton to these 'stars of tomorrow' including Emanuel Sandhu, Patrick Chan and Christopher Mabee. Memorably, 1972 Olympic Silver Medallist and 1973 World Champion Karen Magnussen passed the baton to her nine-year old student Mira Leung.


Among the dozens upon dozens of luminaries who participated in some capacity were Barbara Ann Scott, Barbara Underhill and Paul Martini, Petra Burka, Charles Snelling, Frances Dafoe, Tracy Wilson, Donald Gilchrist, Donald McPherson, Tracey Wainman, Suzanne Morrow-Francis, Maria and Otto Jelinek, Lynn Nightingale, Margaret Roberts and Bruce Hyland, Debbi Wilkes, Vern Taylor, Barbara Gratton, Jennifer Robinson, Michelle McDonald and Martin Smith, Ron Shaver, Barbara Berezowski and David Porter and Jay Humphry. Isabelle Brasseur and Lloyd Eisler brought down the house with their "Patricia The Stripper" program and Toller Cranston even came out of retirement to skate his signature "I, Pagliacci" program! The three notable absences were Elvis Stojko, Shae-Lynn Bourne and Victor Kraatz and Kurt Browning. At the time, Bourne and Stojko were both injured and Browning was in Alberta with his sick mother. Videotaped messages from Bourne and Kraatz and Stojko were included in the edited "Ice Legends" broadcast on Global television, which was ultimately hosted by Browning, who also penned a beautiful piece for the show's program. Additional footage was aired on Debbi Wilkes' delightful "Ice Time" television show. Unfortunately, a union strike affected the event being aired in its entirety. Issues surrounding the costs of clearing footage and music and lighting for TV may have also been contributing factors to this gem of an event not being given the attention it was so obviously due. Sandra Bezic recalled, "I don't like shooting a show that isn't conceived for TV from the get go, or doesn't have proper budget for it, as it always looks horrible on air - and I probably was upset with whatever hacked product did make air."

Without a doubt, never before or since have so many of Canada's skating's luminaries appeared in one event together nor has skating's history been celebrated in such an all-encompassing manner in this country... and this largely forgotten show has to be one of the most overlooked gems of all time.

Skate Guard is a blog dedicated to preserving the rich, colourful and fascinating history of figure skating and archives hundreds of compelling features and interviews in a searchable format for readers worldwide. Though there never has been nor will there be a charge for access to these resources, you taking the time to 'like' on the blog's Facebook page at http://www.facebook.com/SkateGuard would be so very much appreciated. Already 'liking'? Consider sharing this feature for others via social media. It would make all the difference in the blog reaching a wider audience. Have a question or comment regarding anything you have read here or have a suggestion for a topic related to figure skating history you would like to see covered? I'd love to hear from you! Learn the many ways you can reach out at http://skateguard1.blogspot.ca/p/contact.html.
Posted by Skate Guard Blog at May 30, 2017
Email ThisBlogThis!Share to TwitterShare to FacebookShare to Pinterest
Newer Post Older Post Home