A Sensation From Skövde: The Henning Grenander Story 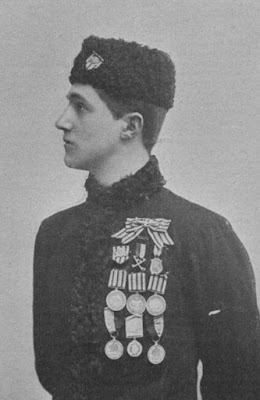 "Grenander, though not the most accurate, is quite the most graceful skater I have seen, the effect of his manner of carrying the unemployed leg far away from the body, the toe always pointing downward and outward, the unemployed knee only slightly bent... the arms carried so as to assist the movement as much as possible, but always presenting a perfectly harmonious effect. As may be gathered from this description, Grenander is essentially a poseur in skating; but his attitude is always graceful, and his wonderful command of body and limb can only be the result of a long course of gymnastic training; in which the Swedes excel, and which no doubt tended to the evolution of their characteristic style." - Edgar Syers, "The Badminton Magazine Of Sports And Pastimes", January 1899 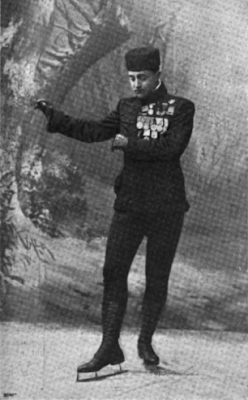 The son of Alfred and Julia (Hvalström) Grenander, Henning Gunnar Esaias Grenander was born August 4, 1873 in Skövde, Västergötland, Sweden. His father was a banker and he was one of seven siblings. He got his start on the ice as a school boy in Skaraborg. "At my school skating was actually made compulsory. We had to go to a neighbouring rink two or three times a week for the purpose of practicing." he recalled in "The Boy's Old Annual". By the age of fourteen, he won a school competition in skating in Stockholm, which according to "Sketch: A Journal of Art and Actuality, Volume 33", he followed up with wins at junior competitions in several Swedish towns. Two years later at age sixteen, he was considered age eligible to compete against 'the big boys' in the senior ranks. 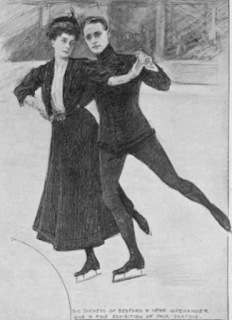 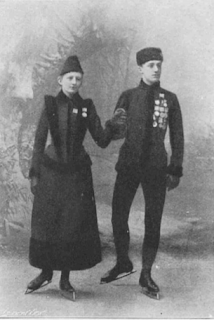 Though he represented the Stockholms Allmanna Skridskoklubb when he started competing
internationally, Henning's considerable talent led to an invitation to train at Prince's Skating Club in Montpelier Square, London as a protege of The Duchess Of Bedford, who was an early advocate in England for skaters practicing the Continental Style. He first gained attention internationally when he appeared at the controversially judged 1893 European Championships in Berlin as a twenty year old then disappeared from the competitive arena for five years... but disappear from the ice he did not. 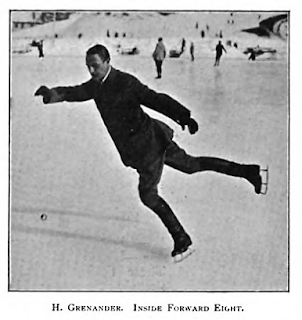 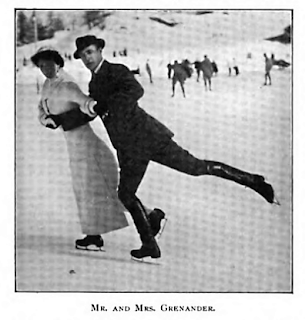 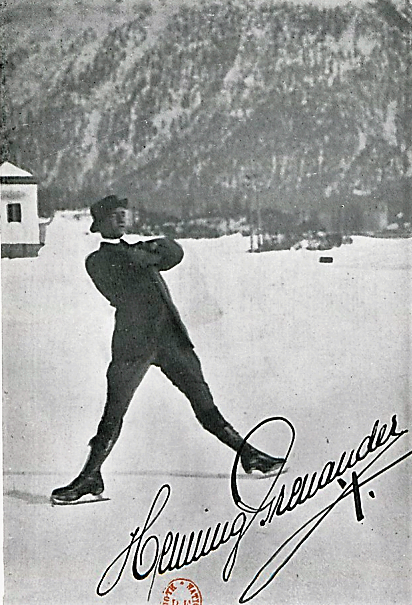 Henning was known as one of the finest skaters in the Continental Style of his era and particularly so as an excellent free skater with much flexibility and grace. He wore pointed skates and included spirals in his free skating program, which was the exception and not the norm at the time. In his 1930 book "Modern Figure Skating", T.D. Richardson noted that "Mr. Henning Grenander used to make a very beautiful figure out of them, and at his speed, it is difficult to conceive any one footed movement more attractive, particularly when used in conjunction with toe spins or loops." Although best remembered as an exemplary free skater, his school figures were far from shoddy. Montagu Sneade Monier-Williams wrote in 1900 of Henning: "He is certainly the finest performer of loops I ever saw." Speaking of loops, ISU historian Benjamin T. Wright noted, "Grenander was known for his prowess in free skating and there had been a long held belief that he was the first to perform a double jump (the loop, but not in competition)." 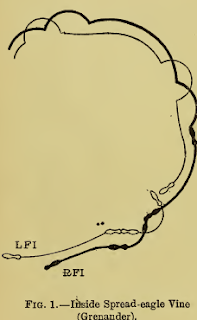 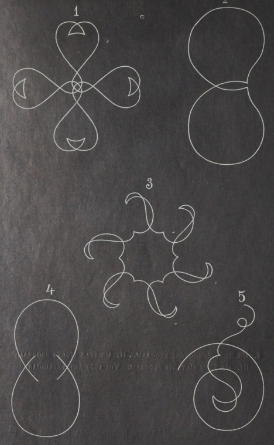 Captain T.D. Richardson noted, "Everyone, with of course varying degrees of success, tried hard to emulate the wonderful style of the graceful young athlete Grenander: in fact I think one is justified in saying that his extempore demonstrations on Sunday afternoon, when quite spontaneously, all the skaters would clear a large space in the middle of the rink and, no matter who was giving the usual formal exhibition, Henning would signal to the orchestra, which would perform quietly some waltz or mazurka or other piece, and he would play about just as the mood and the music made him. There was no set programme, and what is more there was no jealousy or annoyance by the advertised exhibitioners none that I ever heard." 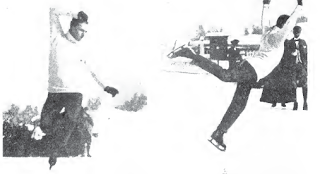 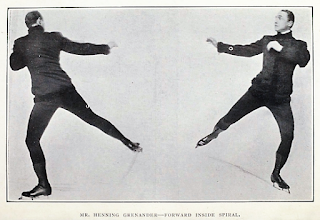 Henning remained in London and divided his time between giving Swedish massages, studying medicine at St. George's University and teaching at the Prince's Skating Club. He was rather popular with the ladies too. Aristocrat Sydney Freeman-Mitford, The Baroness Redesdale wrote in her diary of her affection for her skating instructor: "I would do almost anything he asked me. I would let him call me Sydney, I would even let him kiss me." We don't know if The Baroness ever got to play tonsil hockey with the Swedish masseur, but it wasn't long before he was off the market. 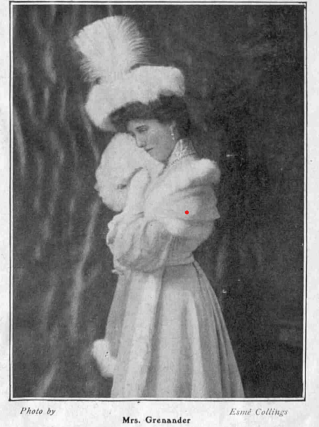 Henning met his wife Isabella Wilson on - of all places - the ice. They tied the knot on November 21, 1901 in Marylebone, London at the Parish Church of All Saints Margaret Street. Seven years later, they entered the waltzing competition at the British Championships, narrowly losing out on the first prize presented by the Duchess of Bedford to Miss Wilkinson and Mr. C.M.G. Howell. 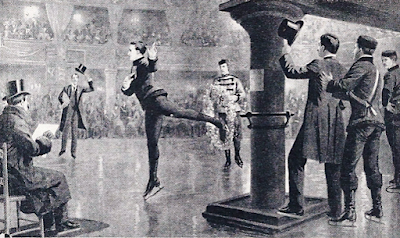 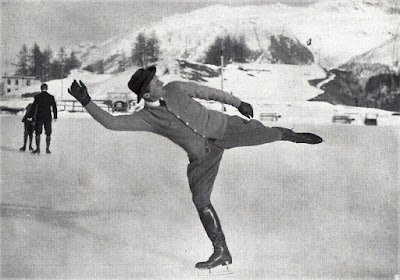 The Grenander's wintered at the popular skating resorts in St. Moritz. Harry Stone, the author of "Ski Joy: The Story of Winter Sports" recalled the couple's visits to the Swiss skating resorts thusly: "Very good looking, (Henning) would simply idle around the rink. Suddenly, apparently just as the mood took him, he would break into a dazzling display of world competition standard, for he had been world champion in 1898 and had given the first exhibition of the Continental style in London. After attracting quite a crowd, he would just as suddenly break off and start skating ordinarily as though he was quite another person. His wife owned the famous dress shop Lucille. So she was not given to wearing black tights but a multitude of different coloured petticoats which frothed as she whirled round the rink." 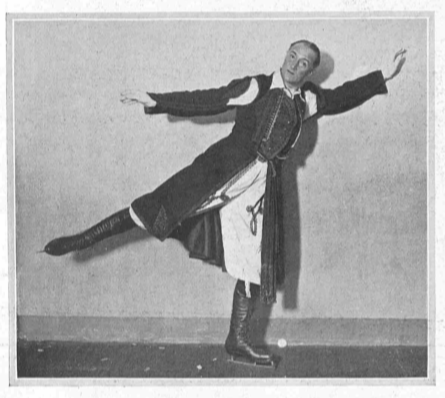 T.H. Deane of Knightsbridge, London manufactured 'The Grenander', a design of round toed iron skate popularized by the Swedish star. Henning continued to command attention on the ice well into his forties, partnering two time World Pairs Champion Phyllis (Squire) Johnson in Valsing competitions at Prince's Skating Club, passing the Gold Figure Test of the National Skating Association and teaching at Grosvenor House. 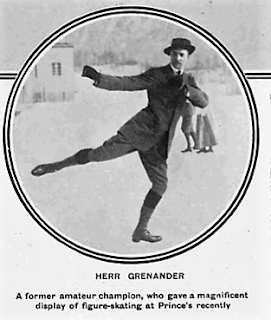 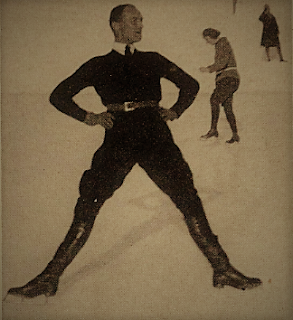 Even after the Great War, skaters were still emulating Henning's style... or being taught by coaches who did. Although often overshadowed by his Swedish successors Ulrich Salchow and Gillis Grafström, he has been largely ignored in modern accounts of figure skating history largely because he really didn't enter many competitions... which is unfortunately often the measure of one's true impact on the sport. 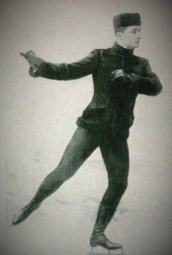 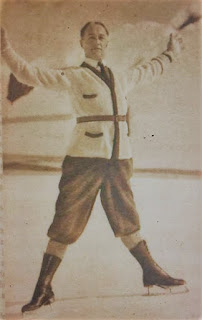 Surviving two World Wars, Henning passed away on March 11, 1958 at the age of eighty four. At the time of his death, he was retired and living at the Ashley Court Hotel in Torquay, England. How incredible it must have been for him to see free skating develop as it did and how unfortunate it is today that his influence hasn't been the credit it duly deserves.

Skate Guard is a blog dedicated to preserving the rich, colourful and fascinating history of figure skating and archives hundreds of compelling features and interviews in a searchable format for readers worldwide. Though there never has been nor will there be a charge for access to these resources, you taking the time to 'like' on the blog's Facebook page at http://www.facebook.com/SkateGuard would be so very much appreciated. Already 'liking'? Consider sharing this feature for others via social media. It would make all the difference in the blog reaching a wider audience. Have a question or comment regarding anything you have read here or have a suggestion for a topic related to figure skating history you would like to see covered? I'd love to hear from you! Learn the many ways you can reach out at http://skateguard1.blogspot.ca/p/contact.html.
Posted by Skate Guard Blog at June 24, 2017
Email ThisBlogThis!Share to TwitterShare to FacebookShare to Pinterest
Newer Post Older Post Home