Almost a century before Nancy and Tonya and 'the whack heard around the world', the good people of Australia were transfixed on a skating courtroom drama of their very own. The case of Leslie Gross .vs. The Sydney Ice Skating Rink and Cold Storage Company, Limited played out in a Sydney courtroom on Saturday, September 18, 1909 and let me tell you, I don't even think Judge Judy could have kept a straight face for this one.

Indent agent Leslie Gross' case against the organization that ran the Sydney Glaciarium charged the company with publicly assaulting and beating him, dragging him from the skating rink and injuring his reputation by falsely imprisoning him. He also asked for the princely sum of two thousand pounds in "damages". It all may sound like a lot of nasty business, but the actual story paints Gross in quite a different light. I will let you be the judge! 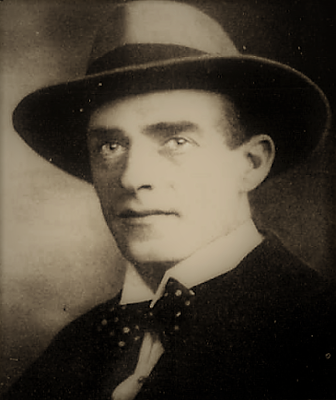 Dunbar Poole, competitor at the 1911 and 1912 World Figure Skating Championships

"The Northern Star" reported that the "plaintiff had been a regular skater at the Glaciarium, practically from the opening [in 1907]. The incident which gave rise to the present action happened on the evening of Friday, June 4. Plaintiff went to the rink that evening in order to skate, and shortly after putting on his skates he met two young girls, who told him  that they had picked up a bangle. He took them across to the office to ascertain if the loss of the bangle had been reported, but it had not. He afterwards went with one of them down to the private skate department, and made  inquiries there, without success. There was a boat ticket attached to the bangle, which bore the name 'Mrs. Wallace.' Plaintiff left word that a bangle had been found, and that If Mrs. Wallace inquired for it she could have it. He afterwards gave the bangle into the care of a little girl, who was sitting with her mother in the rink, until the owner should ask for it, and then went on skating. Later on, while the plaintiff was sitting down, Mr. Dunbar Poole, manager of the rink, came over and demanded the bangle, and as the plaintiff declined to restore it to anyone except the lawful owner, he was threatened by Mr. Poole with arrest. A person who said he was Mr. Wallace also came up and asked for the bangle, and was told if Mrs. Wallace claimed it she could have it on applying. Plaintiff probably gave the impression that he had the bangle in his possession, whereas; as previously stated, he had given it into the keeping of the little girl. Plaintiff resumed his skating, and while so engaged he was seized by one of the rink attendants, handed over to two plain-clothes constables, dragged hatless, and still wearing his skates, out of the rink, followed by a large crowd, across to the Redfern Police Station; where he was locked up for about an hour. The police during that interval went across to the rink, and had no trouble in getting the bangle from tho little girl. After plaintiff had been released from custody he returned to the rink, and was refused admission, although he was without his hat and was still wearing his skates. Eventually he was permitted to re-enter on condition that he did not skate. He accordingly went in and got his hat; and then left. The defendant company was subsequently written to on Plaintiff's behalf, and their reply was to the effect that they would return the defendant his registration fee, together with his boots and skates, which had been left at the rink, at any time he might appoint, as it was their intention not to admit him to the rink again."

You have to marvel at the incredible maturity of this grown man right? The Sydney Ice Skating Rink and Cold Storage Company pleaded not guilty, arguing that the plaintiff behaved "in such a way that they were entitled to remove him, which they did without unnecessary force." One has to chuckle at this well-to-do, hatless (heaven forbid) man being dragged out of a rink with his skates still on by police because he refused to give back a bangle and boat ticket to the rink owner and the owner's husband. Really classy stuff. In the end, a jury voted unanimously in favour of the defendants. Dunbar Poole went down in history as one of Australian figure skating's most important pioneers and Leslie Gross is remembered simply as the man who was barred for life from the Sydney Glaciarium. History is not often cut and dry, but in this instance there was indeed a real winner... and a real loser.

Skate Guard is a blog dedicated to preserving the rich, colourful and fascinating history of figure skating and archives hundreds of compelling features and interviews in a searchable format for readers worldwide. Though there never has been nor will there be a charge for access to these resources, you taking the time to 'like' on the blog's Facebook page at http://www.facebook.com/SkateGuard would be so very much appreciated. Already 'liking'? Consider sharing this feature for others via social media. It would make all the difference in the blog reaching a wider audience. Have a question or comment regarding anything you have read here or have a suggestion for a topic related to figure skating history you would like to see covered? I'd love to hear from you! Learn the many ways you can reach out at http://skateguard1.blogspot.ca/p/contact.html.
Posted by Skate Guard Blog at August 05, 2017
Email ThisBlogThis!Share to TwitterShare to FacebookShare to Pinterest
Newer Post Older Post Home