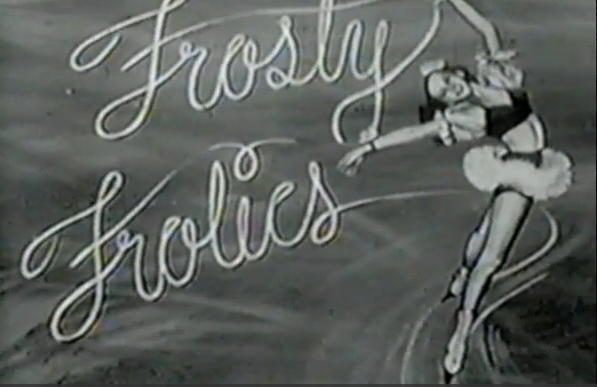 Debuting June 15, 1951 on Los Angeles' Channel 5 (KLTA), the Frosty Frolics were the brainchild of the television station's late manager Klaus Landsberg. Combining figure skating, live music and dance as a kind of variety hour, it became an instant hit with California audiences. Don't believe me? The Frosty Frolics actually became the fourth most watched television show in L.A. less than two months after it first aired! 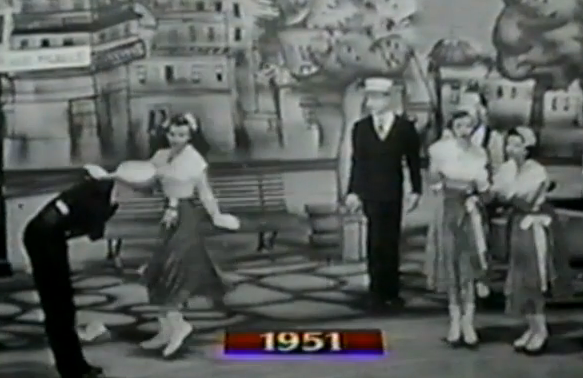 An effort was made in the first year of the show's production for coast to coast syndication and in early October 1951 the show went national. However, the show's sponsor for syndication (Vitamin Associates) went bankrupt and The Frosty Frolics returned to being a show that only aired in California, continuing to be popular among audiences until it last aired in 1956. The only known full episodes of the show exist in the UCLA Film and Television Archive. 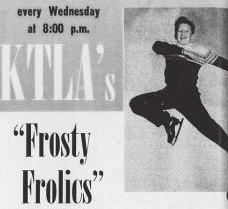 The skating cast included members of the Ice Follies and Ice Capades troupes as well as professional skaters based in California who wanted a much needed break from the gypsy world of touring productions. Among the skaters were Mabel Fairbanks, the husband and wife team of April and Roy Schramm (stars of The Skating Schramms Ice Show which appeared in Hollywood, Hawaii and The Pacific National Exhibition), Evy Scotvold, Joanne and Buff McCusker, and Mae Edwards. The production was choreographed by Bob Turk.

In the book "KTLA's News at Ten: Sixty Years with Stan Chambers", the late Stan Chambers, the show's host, offered a behind the scenes glimpse into this effort: "If a skater fell, he had no choice but to get up and continue his routine. If a set tipped over or a prop broke, there were no re-takes... The audience watching at home was made to believe that Frosty Frolics took place at the Alpine Hotel, somewhere in the green forests of a beautiful mountain retreat. In reality, everything came from the prop department at Paramount Studios. Fake trees and real plants, tables, chairs, red carpeting for a walkway on the ice, cloth flats that were used to make the side of the hotel, and banisters for the dining area were all hauled over to the Polar Palace in the afternoon as the stage crew created their Alpine Hotel. The flimsy cardboard 'stone' walls were sprayed with a paint gun by an artistic genius, Sherman Laudermilk. He bent, twisted, and cut the cardboard, sprayed it with fast-drying paint, and created settings that you couldn't tell weren't the real thing... The crew wore ice skates, and the props were brought in on sleds or pushed across the smooth ice surface by skating stagehands. Several members of the crew were hired for their professional hockey playing experience. Most, however, were novices who learned to skate in record time. KLTA received countless calls from viewers who wanted to know the location of the Alpine Hotel so they could make dinner reservations or spend the weekend there. It made for interesting conversation when the switchboard operator explained that the Alpine Hotel wasn't real, and was broken down and returned to Paramount Studios every night." Costumes for the show came from a warehouse of old, forgotten costumes that was part of Paramount's wardrobe department. Reduce, reuse, recycle... believe me, I remember all that from my own skating club's shows. We had circus animals and snowflakes every single year and I'm betting we weren't the only club that did either.

Stan Chambers also reflected, "Few would have been so daring at the time to rent a rink, put together such a large cast, create new stories every week, and know the entire production would come together at airtime. Klaus had confidence in what he did, and he knew that the show would come off. I feel fortunate to have been a part of that production." I would have felt fortunate just to watch it every week, to be honest. Professional skating on television today has been reduced to a handful of carefully edited hour long specials every year. I don't think you'd ever see anything like The Frosty Frolics again... but the idea of a weekly live, old-timey theatrical skating show like this making a comeback is enough to make me smile, sip my tea and dream a little. It would be something, that's for sure!

Skate Guard is a blog dedicated to preserving the rich, colourful and fascinating history of figure skating and archives hundreds of compelling features and interviews in a searchable format for readers worldwide. Though there never has been nor will there be a charge for access to these resources, you taking the time to 'like' on the blog's Facebook page at http://www.facebook.com/SkateGuard would be so very much appreciated. Already 'liking'? Consider sharing this feature for others via social media. It would make all the difference in the blog reaching a wider audience. Have a question or comment regarding anything you have read here or have a suggestion for a topic related to figure skating history you would like to see covered? I'd love to hear from you! Learn the many ways you can reach out at http://skateguard1.blogspot.ca/p/contact.html.
Posted by Skate Guard Blog at August 15, 2017
Email ThisBlogThis!Share to TwitterShare to FacebookShare to Pinterest
Newer Post Older Post Home