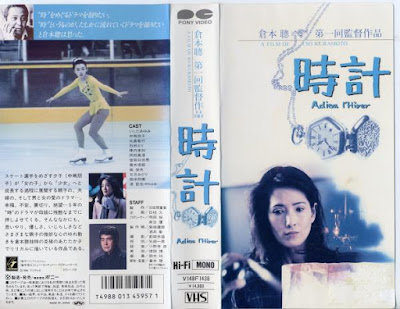 Initially released for Fuji Television Network in Japan on October 10, 1986, the film "Tokei – Adieu l'hiver" marked the directorial debut of Japanese screenwriter Satoshi Kuramoto. Kuramoto had written a 1981 film called "Eki" directed by Yasuo Furuhata that starred an accomplished singer and actress from Ikeda in Japan's Osaka Prefecture named Ayumi Ishida. Ishida's mother Haruko was twice a medallist at the Japanese Figure Skating Championships and a competitor at both the 1968 Winter Olympics in Grenoble, France and the 1968 World Championships in Geneva, Switzerland. After retiring from competitive skating, she went on to a successful career as a coach.

Kuramoto cast Ishida as the lead in "Tokei - Adieu l'hiver" and drew on her her own family history when crafting the screenplay. Elements of the plot loosely mirrored the real life story of Ayumi's mother Haruko training for the 1968 Winter Olympic Games in Grenoble under the legendary Etsuko Inada. In the film, Ishida plays a figure skating coach named Reiko Hayami coaching her young daughter Yuko, played by Tomoko Nakajima. Scenes were filmed over a period of several years to reflect Nakajima's real life growth.


In the film, Reiko met her daughter's father when he was playing hockey and she was competing in figure skating in the 1968 Winter Olympics. Jiro, the father, goes east to coach hockey and young Yuko wears a locket with a picture of her father. A young film director named Kitani magically shows up at the rink where mother and daughter are practicing and announces that he wants to take a film of a child transforming into a woman on the ice. Sparks fly between Reiko and Kitani while little Yuko trains five years for a chance to compete in one 'Frozen Cup' skating competition. However, while the romance blossoms, young Yuko's skating doesn't improve drastically. In the end, there's another woman in the picture and Reiko's relationship with Kitani goes sour. At the Frozen Cup, Yuko falls twice and then crashes into the bleachers. She gets hauled off in a stretcher. Reiko goes to Hokkaido to work on an ice show, meets up with Jiro and the film ends with a sappy Japanese love song by Yukari Kaneko.

Although the film "Tokei – Adieu l'hiver" itself received poor ratings, Ayumi Ishida won the 1986 Best Actress Award at both the Hochi Film Awards and The Association Of Tokyo Film Journalist's Blue Ribbon Awards. Unlike the Academy Awards or Golden Globes for instance, Japanese film awards base their decision around the body of work of an actor or actress. I think it's pretty safe to imply Ishida's appearance in Kinji Fukasaku's blockbuster hit "House On Fire" that year contributed to her success. Considering that at the time this film was released, a Japanese skater had yet to win an Olympic medal or World title, the fact that a director had chosen to centre the storyline of a film around figure skating would have been quite unique. "Tokei - Adieu l'hiver" may have been no "Sun Valley Serenade" or "Suspense", but it sure is one more fascinating footnote from figure skating history.

Skate Guard is a blog dedicated to preserving the rich, colourful and fascinating history of figure skating and archives hundreds of compelling features and interviews in a searchable format for readers worldwide. Though there never has been nor will there be a charge for access to these resources, you taking the time to 'like' on the blog's Facebook page at http://www.facebook.com/SkateGuard would be so very much appreciated. Already 'liking'? Consider sharing this feature for others via social media. It would make all the difference in the blog reaching a wider audience. Have a question or comment regarding anything you have read here or have a suggestion for a topic related to figure skating history you would like to see covered? I'd love to hear from you! Learn the many ways you can reach out at http://skateguard1.blogspot.ca/p/contact.html.
Posted by Skate Guard Blog at August 22, 2017
Email ThisBlogThis!Share to TwitterShare to FacebookShare to Pinterest
Newer Post Older Post Home