All Hans On Deck: The Hans Gerschwiler Story 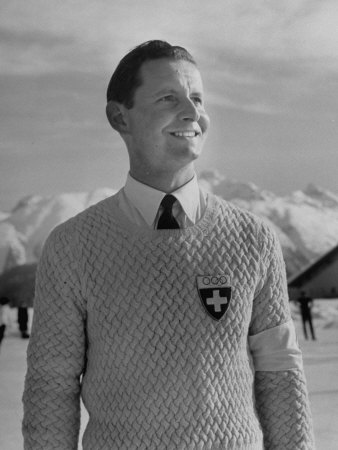 "Besides all the honours and fun that skating has brought me, along with the chance to travel and see other countries, I shall always be grateful for the many friends it has given me all over the world... They have been just wonderful to me - generous, kind and welcoming always." - Hans Gerschwiler, "Skating" magazine, January 1948

Born June 20, 1920 in Winterthur, Switzerland, Hans Gerschwiler grew up in a skating family. Although his uncles were famed coaches Arnold and Jacques Gerschwiler, he somehow managed to avoid taking up the sport seriously until he was thirteen, when he received his first lesson from his uncle Arnold in Neuchâtel. Despite the late start, all it took were a few lessons with his uncle for it to be glaringly apparent that he had it going on. He left school at the age of sixteen to pursue the sport and followed his uncle Arnold to London, where he earned the National Skating Association's Bronze, Silver and Gold medals within a two year span. Like most European skaters during his era, Hans Gerschwiler divided his training time between England and Switzerland. 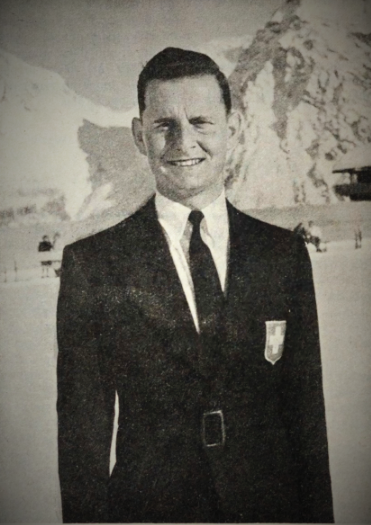 In 1938, Hans entered the Swiss Championships for the first time and won. It wasn't even close either; he was over one hundred points ahead of his closest rival in figures alone! After repeating as Swiss Champion the following years and making a very impressive international debut at the 1939 European Championships in Davos, Switzerland (finishing fifth in a field of twelve) he returned to England, where he remained throughout World War II. He took up residence with Cecilia Colledge's family for a time. 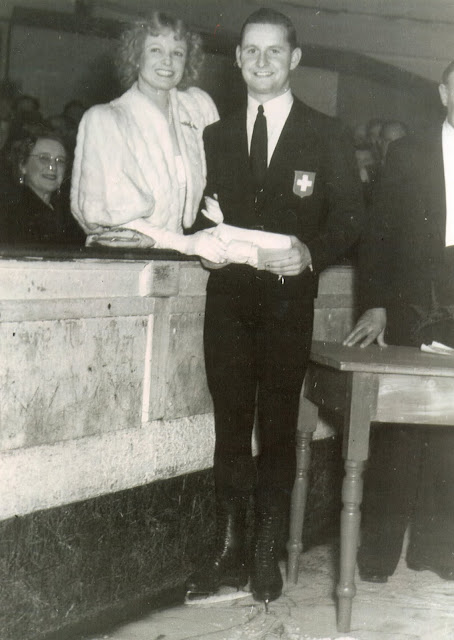 Hans worked in a factory and as a fire watcher during the War. He was rarely able to train - sometimes only once a week - with the rinks at Queen's and Richmond being the only two that remained open... with blackout curtains on the windows and gas masks in the dressing rooms should an air raid siren go off. 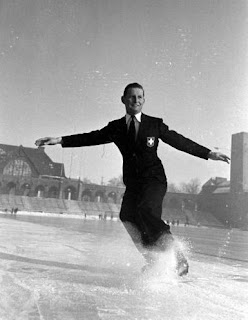 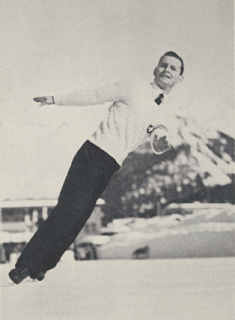 Despite subsisting on meagre rations, Hans did manage to participate twice a year in exhibitions that benefited British war charities. He even did some pairs skating with Joan (Lister) Noble. Off the ice, he spoke English, French, German and Italian and was well respected by his peers. He played tennis, squash and swam, had a piano accordion and enjoyed yodelling "until his voice broke".

When skating competitions resumed following the War, Hans returned to win two more Swiss Championships and easily skated to victory at the 1947 European Championships in Davos. His crowning moment came at the 1947 World Championships in Stockholm, Sweden when he claimed the gold medal ahead of Dick Button after securing a 34.9 point lead in the school figures. In his book "Dick Button On Skates", Uncle Dick recalled, "The fateful bell sounded again and it was announced that Hans had won. I was second. He had scored seven and I had eight in this placings. But there was more to it. The score was even closer. I had made up the deficit in points! I went beyond the Swiss by 352.86 to 350. But that didn't matter; it meant an E for effort, but Hans still won. He had a majority of first places in the votes of the judges - three to two - and that's what counted. Gerschwiler was ranked first by the Swiss, Czech and English judges, with me second. I won the Danish and United States votes, with Hans second on those cards... I congratulated Hans and assured him that the best man had won." 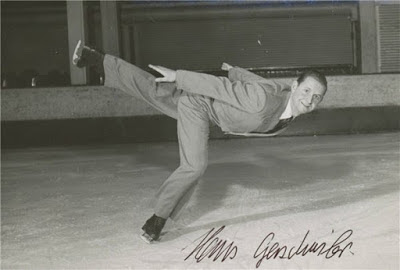 On March 3, 1947, "LIFE" Magazine reported that after Hans beat Dick "the Ostermalm Stadium echoed with angry Swedish whistles." Debbi Wilkes, in her 1994 book "Ice Time: A Portrait Of Figure Skating", hypothesized that Hans "won in 1947 only because Dick Button had poor strategy and didn't compete in the Europeans where the judges could get a look at him. He couldn't break through the wall of judges all lined up for Hans. But in 1948, the Gerschwilers knew Hans wouldn't be Olympic champion the way Dick Button was skating unless they made some deals. In Prague that year for the Europeans, Arnold Gerschwiler said to Sheldon [Gailbraith], 'If Hans doesn't win, too bad for Barbara [Ann].' Sheldon said, 'Shove it up your sleeve.'" 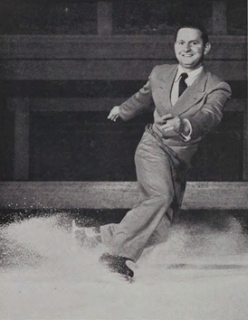 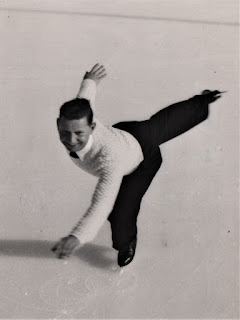 Hans didn't win in Prague. Dick Button did... and decisively at that. This time, Dick had a 2.8 point lead on Hans in the figures and ultimately beat the Swiss star by seven placings in the free skate. At the 1948 Olympic Games in St. Moritz, Hans' error on the back loop change loop allowed Dick to increase his early lead in the figures. Hans finished second, 29.6 points behind him. Skating after Dick received a 6.0 for his free skate, Hans managed to skate quite masterfully on terrible ice but a fall left him in second with a total of twenty three placings to Button's ten. Even though he was the defending World Champion, if you look the fact that those Olympics were only his fourth international competition... an Olympic silver medal was pretty damn impressive if you ask me. Hans rebounded at the 1948 World Championships in Davos, beating Dick 1149.3 to 1145.4 in the school figures but a flawed free skate left him again in second with nineteen places to Dick's eleven and 1948.5 points to Dick's 1928.7. 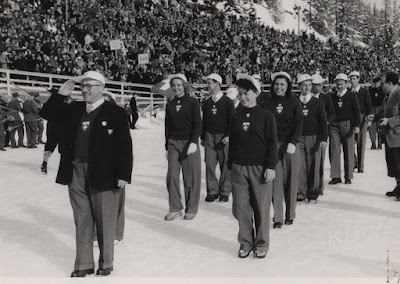 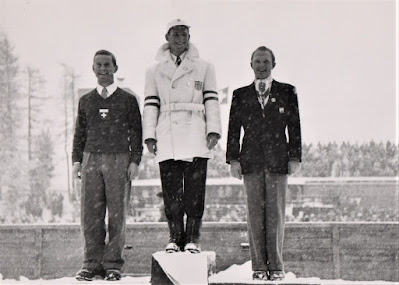 Top: Hans marching with the Swiss team at the 1948 Winter Olympic Games. Bottom: Dick Button, Hans Gerschwiler and Edi Rada on the podium at the 1948 Winter Olympic Games. Photos courtesy Stella Gerschwiler.
In August of 1948, it was announced that Hans would be the new professional coach of the McIntyre (Porcupine) Skating Club in the northern Cochrane County village of Schumacher, Ontario starting on October 15 of that year. While in Ontario, he continued performing professionally, appearing in the Minto Follies in March 1949 alongside Barbara Ann Scott and Lois Waring and Walter Bainbridge. To improve his credentials and branch out into coaching ice dance, he actually took the CFSA's Preliminary, Bronze and Quickstep Dance tests in 1950. A World Champion taking beginner dance tests might sound funny to you, but it happened a lot in those days, believe you me. 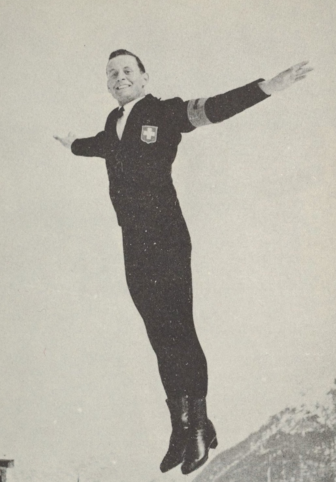 Many of Gerschwiler's students went on to become coaches themselves, among them none other than Doug Leigh, who coached Elvis Stojko to Olympic Silver and World Gold to match his coach's successes. In 1953, Hans married Nancy Jane Clarke and shortly thereafter taught in the States and at the Winnipeg Winter Club and Glencoe Club. He was honoured by the ISI with an induction their Hall Of Fame in 1980. When Stéphane Lambiel won the World title in 2005, he was one of the first people to send him a congratulatory message. 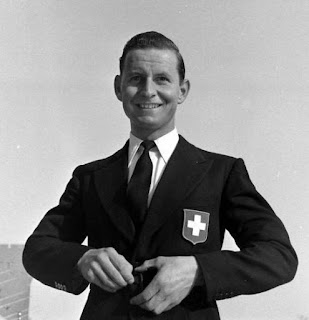 Hans sadly passed away on September 27, 2017 at the age of ninety seven. When considering his unique contributions to the sport, skating historian Nigel Brown said it best: "Hans Gerschwiler was a scientific skater. Every movement or move, either in figure or free was calculated technically. Its cold correctness had a powerful charm about it, because it was performed to well-nigh perfection. The aim of the English school had been achieved by Hans Gerschwiler... Until now simple runs in preparation for getting a position or as momentum for a jump were often strewn all over the rink in wasteful fashion which dislocated the continuity of the exhibitions. Hans Gerschwiler pioneered the employment of intricate steps in relation to the other movements as an essential part of the programme."

Skate Guard is a blog dedicated to preserving the rich, colourful and fascinating history of figure skating and archives hundreds of compelling features and interviews in a searchable format for readers worldwide. Though there never has been nor will there be a charge for access to these resources, you taking the time to 'like' on the blog's Facebook page at http://www.facebook.com/SkateGuard would be so very much appreciated. Already 'liking'? Consider sharing this feature for others via social media. It would make all the difference in the blog reaching a wider audience. Have a question or comment regarding anything you have read here or have a suggestion for a topic related to figure skating history you would like to see covered? I'd love to hear from you! Learn the many ways you can reach out at http://skateguard1.blogspot.ca/p/contact.html.
Posted by Skate Guard Blog at September 16, 2017
Email ThisBlogThis!Share to TwitterShare to FacebookShare to Pinterest
Newer Post Older Post Home
"As a rule an author has one or two popular ways of contrasting the past with the present. He can treat the past as lying in comparative doleful ignorance, or he can explain that the past was infinitely superior to the day we live in. Of course, either method is the popular journalism of the moment, and in reality there is no sharp contrast, but a gradual transition which leads the past into the present." - Joel B. Liberman, Skating Club Of New York