When you dig through skating history, you never know what you will unearth. In the spirit of cataloguing fascinating tales from skating history, #Unearthed is a once a month 'special occasion' on Skate Guard where fascinating writings by others that are of interest to skating history buffs are excavated, dusted off and shared for your reading pleasure. From forgotten fiction to long lost interviews to tales that have never been shared publicly, each #Unearthed is a fascinating journey through time. This month's 'buried treasure' is an eighteenth century treatise on skating penned by penned by Johann Christoph Friedrich GutsMuths, an educator at the Schnepfenthal institution. First published in German in the late eighteenth century, it was translated to English for the 1800 book "Gymnastics For Youth Or A Practical Guide To Healthful And Amusing Exercises: For The Use Of Schools".

I come to an exercise, superior to every thing, that can be classed under the head of motion. Like the bird sailing through the air with wing unmoved, the skater now glides along as if impelled by the mere energy of volition; now gracefully wheeling in all the intricate curves fancy can conceive, he wantons securely on the slippery surface, that the unpractised foot dares not tread; anon the rapidity and ease with which he glides along astonish us. I know nothing in gymnastics that displays equal elegance; and it excites such divine pleasure in the mind of the performer, that I would recommend it as the most efficacious remedy to the misanthrope and hypochrondriac.

Pure air, piercing, bracing cold, promotion of the circulation of the different fluids, muscular exertion, the exercise of such various skillful movements, and unalloyed mental satisfaction, must have a powerful influence, not only on the corporal frame of man, but also on his mind likewise. To this every male and female skater will assent. Frank wishes, that skating were introduced into universal practice, as he knows no kind of motion more beneficial to the human body, or more capable of strengthening it. 'The Dutch ladies' he adds, 'have energy enough to brave the frost with agile foot, while our tender things are knotting in close rooms by the fire-side.' Campe particularly recommends it in the following words. 'I know not a more pleasant, or more beneficial exercise; and every child of eight or ten years old, boy or girl, may and ought to learn it.' Yet half our youths hardly know even what skating is.

This exercise has been considered as hazardous, because it exposes to falls; but I am persuaded, that it is less dangerous than many others; than riding for example: for a man fares much better when he depends on his own dexterity alone than when he has to contend with the strength and humours of a vicious animal. I have personally had a great deal of experience of both these exercises; and not, notwithstanding I did not learn skating till late in life, never found myself in danger from this, though my life has been risked more than once from the other. More than forty boys and young persons have been taught to skate under my inspection, yet I never saw any accident happen to one of the number. While learning, they have had several falls as I had myself: this is unavoidable; but they soon acquired the art of falling, or of carrying themselves so as to come down without injury, when they found they could not keep their feet. The breaking of the ice, and danger of drowning, have nothing to do with the exercise itself, but are consequences of the extremely defective attention we pay to youth. 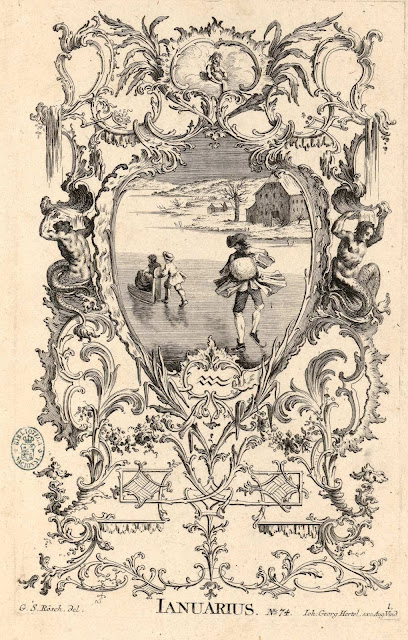 The acquisition of this art is by no means difficult to those who begin at an early age. All that is necessary is to see that the skates are well made; to take care that they are fastened as securely to the feet as possible, in the most commodious manner, without pinching them; and diligently to inculate the grand, indispensible rule for beginners: always to incline the body forwards, that the skater may not fall on his back. With this rule the learner may be left to his own dexterity; every thing else he will found out of himself, with very little instruction.
If we did not manage our children so wretchedly in the cradle, and when they learn to walk, as is almost universally done; but allowed them the free use of their limbs, even while at the breast, they would prove very different creatures, with respect to bodily qualifications. I have such a boy before me, who, before he was a twelve month old, ran about the pavement in the court; and who, in in his seventh year, was an adept at all gymnastic exercises, in proportion to his bigness, almost without the trouble of learning. This boy had almost learned to skate in the course of an hour after he began. I know too others, whom I must exclude from this exercise, or they would fracture their skulls in twenty minutes...

Grown persons, who possess no degree of activity, will do well to practice skating at first with a chair, till the muscles of the legs have acquired sufficient strength to support them on two slender irons without twisting the ankles.

Skate Guard is a blog dedicated to preserving the rich, colourful and fascinating history of figure skating and archives hundreds of compelling features and interviews in a searchable format for readers worldwide. Though there never has been nor will there be a charge for access to these resources, you taking the time to 'like' on the blog's Facebook page at http://www.facebook.com/SkateGuard would be so very much appreciated. Already 'liking'? Consider sharing this feature for others via social media. It would make all the difference in the blog reaching a wider audience. Have a question or comment regarding anything you have read here or have a suggestion for a topic related to figure skating history you would like to see covered? I'd love to hear from you! Learn the many ways you can reach out at http://skateguard1.blogspot.ca/p/contact.html.
Posted by Skate Guard Blog at August 30, 2022
Email ThisBlogThis!Share to TwitterShare to FacebookShare to Pinterest
Newer Post Older Post Home