When you dig through skating history, you never know what you will unearth. In the spirit of cataloguing fascinating tales from skating history, #Unearthed is a once a month 'special occasion' on Skate Guard where fascinating writings by others that are of interest to skating history buffs are excavated, dusted off and shared for your reading pleasure. From forgotten fiction to long lost interviews to tales that have never been shared publicly, each #Unearthed is a fascinating journey through time. This month's #Unearthed comes to you from the late A.C.A. Wade's book "A Skater's Cavalcade: Fifty Years Of Skating" and offers a first hand account of skating in England during The Great Frost Of 1895. Enjoy! 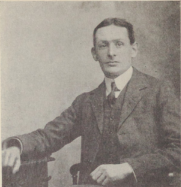 My happiest memories of open-air skating - or any skating - are those of the early months of 1895, when England had the longest frost for very many years. This protracted cold spell began soon after Christmas with two weeks' sharp frost, followed by snow and a short thaw. Before the snow and ice had disappeared, frost set in again in mid-January. Day after day the temperature went lower, and in the country the snow lay hard and white for many weeks. I was home at Gravenhurst from my last term at school, and had an almost unlimited holiday in front of me. Nearly every day Jack Titmas and I tramped across the fields to Wrest Park, where we had permission from Lord Cowper, the owner, to skate on all the lakes in the gardens and surrounding grounds. About half-a-dozen other youths from the neighbourhood. joined us daily, and on most days we had many acres of ice to ourselves until dusk, when a few more people arrived. We explored every corner of the gardens and found several quaint little lakes hidden away behind high centuries, old yew hedges, but the best ice of all was on our favourite Serpentine. We used to take our lunches with us, and generally sat on the snow-covered banks to eat. When the wind was very keen we occasionally had our lunch in one of the picturesque pavilions or summer-houses in the gardens. Usually we were so warmed up by the exercise that cold didn't worry us, but the air gave us wonderful appetites, and it was generally hunger that eventually drove us homewards in the evenings.

Some delightful ice picnics were organised by one of my aunts (Miss Maud Wade), when a merry party sat around in the snow by the lake-side to munch cakes and sandwiches. The boiling of the kettle for tea on a small bonﬁre of dry sticks required a good deal of ingenuity and patience. Those were very good days, before the age of thermos ﬂasks and music from the gramophone or wireless. By the way, we once had a village band to play while we skated. Their job was certainly a chilly one, but we "thawed" them with something piping hot to drink besides tea. Although the thermometer was often near zero, and sometimes below, we did not seem to feel the cold nearly so much as we did when it was barely freezing. That was, I believe, due in great measure to the dryness of the atmosphere. I never wore an overcoat during that time, but was always careful to have warm gloves - just in case of frost bite. During that long, cold period the waters of many of the more shallow lakes and ponds froze right to the bottom, the ice being several feet thick. This was not always an advantage, as while there was no danger of falling through, the solid blocks sometimes cracked and the ﬁssures would catch a skate blade and trip an unwary skater. Cattle and horses often wandered over the ice and trespassed in unexpected places, as the water no longer formed a barrier. A coach and four was driven across more than one river; in fact, most of the lakes could have carried a heavy train, complete with locomotive. Many rivers were frozen for miles, and on the Ouse at Bedford, where I skated one day for a change, there were hundreds of people on the ice which stretched from Bedford Bridge right to Kempston in one direction and to Newnham in the other. This frozen river proved a great boon to local Carters, who took a short cut with laden wagons and horses across the ice. In addition to hockey, we sometimes introduced some novelties into skating - or perhaps I should say ice sports. I remember a bicycle race in Crest Park which though not exactly a success gave plenty of amusement to those who watched - if not to the competitors. 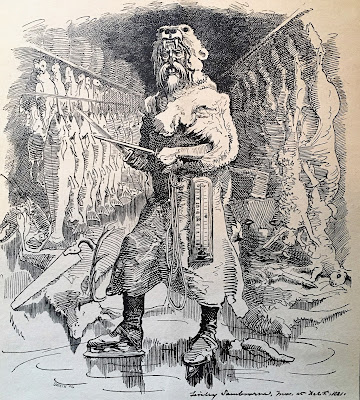 Directly the race started the fun began. Two machines immediately skidded on the slippery surface, the third, which was close behind, falling over the others. Nothing daunted, the cyclists tried again and one managed to keep up until he ventured to make a turn, when his machine slithered across the ice, bringing down an unwary spectator. Sail skating, or skate sailing, I don’t know which term is the more correct, was another novelty we tried which was decidedly thrilling. With a home-made sail stretched out on the arms, the wind sent us gliding along. When the wind was boisterous, steering became Very tricky and difficult, and naturally the sport became more risky and consequently more exciting. Unless great care was taken the wind might suddenly swirl the skater round and a crash would immediately result. This happened to more than one of us. Near the end of the great frost I was in London for a few days, and saw the Thames covered with great masses of ice floating down the river, with tugs churning through the ﬂoes like miniature ice-breakers. The Press had a good deal to say about this great frost, and the Morning Post recorded that "in the middle of February, 1895, the Thames was frozen over for a mile above Kingston Bridge and thronged with skaters."

"Showing how strong the ice is," the report continued, a correspondent states that "a gentleman rode on horseback from the Middlesex to the Surrey shore, and a horse and cart was driven up and down the ice for a considerable distance." There were many other unusual incidents recorded during this period. An ox was roasted on the Thames at Hampton Ferry. The knife and fork used to carve the ox were presented in 1934 to the Kingston Museum by Mr. S.W. Alexander, a member of the Kingston Council. A fancy dress carnival was held on the ice by torch-light at Teddington, and cyclists rode across the river at Kingston. A four-in-hand was driven across the ice at Richmond, and at Oxford a coach and four crossed the Cherwell. At the Thames near Putney a solid block was formed of ice floes from bank to bank. At Greenwich the river was blocked by ice for over a week, even high-powered steamers being unable to force a passage. 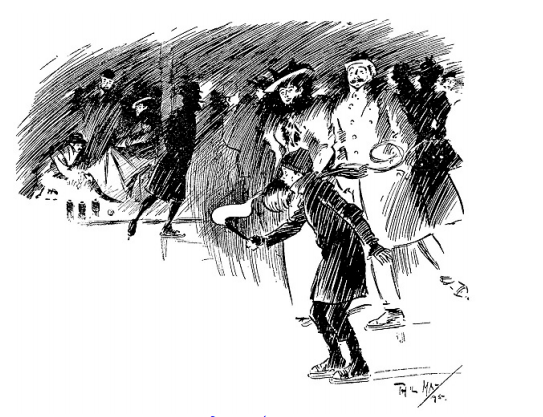 "Skating by Torchlight on the Serpentine" from "The Daily Graphic", 1895

The Serpentine in Hyde Park was crowded day and night, and one Sunday a battalion of Guards in full kit marched across the ice, where 100,000 people were skating. People in the Fens skated 30 or 40 miles as a matter of course, and many vehicles were driven over the ice to see a great skating match on Spinney Fen in Cambridgeshire. According to Haydn's Dictionary of dates, the great frost of 1895 actually began on December 30th, 1894. Except for a mild period from January 14th to 21st it continued until March 5th, 1895. The temperature in London on February 9th sank to 13 degrees Fahrenheit, and at Loughborough, Leicester, a temperature of one degree was recorded.

Skate Guard is a blog dedicated to preserving the rich, colourful and fascinating history of figure skating and archives hundreds of compelling features and interviews in a searchable format for readers worldwide. Though there never has been nor will there be a charge for access to these resources, you taking the time to 'like' on the blog's Facebook page at http://www.facebook.com/SkateGuard would be so very much appreciated. Already 'liking'? Consider sharing this feature for others via social media. It would make all the difference in the blog reaching a wider audience. Have a question or comment regarding anything you have read here or have a suggestion for a topic related to figure skating history you would like to see covered? I'd love to hear from you! Learn the many ways you can reach out at http://skateguard1.blogspot.ca/p/contact.html.
Posted by Skate Guard Blog at June 29, 2021
Email ThisBlogThis!Share to TwitterShare to FacebookShare to Pinterest
Newer Post Older Post Home
"As a rule an author has one or two popular ways of contrasting the past with the present. He can treat the past as lying in comparative doleful ignorance, or he can explain that the past was infinitely superior to the day we live in. Of course, either method is the popular journalism of the moment, and in reality there is no sharp contrast, but a gradual transition which leads the past into the present." - Joel B. Liberman, Skating Club Of New York