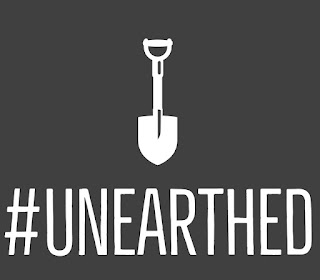 When you dig through skating history, you never know what you will unearth. In the spirit of cataloguing fascinating tales from skating history, #Unearthed is a once a month 'special occasion' on Skate Guard where fascinating writings by others that are of interest to skating history buffs are excavated, dusted off and shared for your reading pleasure. From forgotten fiction to long lost interviews to tales that have never been shared publicly, each #Unearthed is a fascinating journey through time.
This month's edition comes to you from the January 1904 issue of the "New York Athletic Club Journal". It is an article called "Ye Olden Skating" originally written by Marvin R. Clark, the noted skating critic who penned "The Skater's Textbook" with William H. Bishop (a.k.a. Frank Swift) in 1868. This piece offers a wonderful glimpse into skating in New York City during Clark's era and before.

Not the skating of the Dutch frauleins, who, with baskets of eggs upon their heads and long, thin bones tied to their feet, in the olden time combined pleasure with business by skating down the frozen streams to the market-town, leaving behind them in the memory of the beholder, visions of round, rosy faces, blonde, frowsy hair, feet made for anything but show, ankles never suggesting frailty, and sinewy legs clothed in gray wool fit to sour the sweet disposition of a poet or snap the strings of Orpheus' lyre.

Then was the clumsy age of primitive, business skating, and it is ordained from the beginning, that when we adulterate pleasure with business, one or the other will get the whip-hand and that one is not pleasure. Sub rosa, some of this lack of both grace and art may even now be observed in the exceptional modern belle who thinks her skating of the spread-eagle both artistic and graceful.

The members of the N.Y.A.C. will be surprised to learn that not fifty years ago, many of our old - and not so very old - inhabitants were accustomed to skate in winter upon the very ground upon which their club house stands. In fact, we need not go back as far as a half century for I indulged in the art on that very spot in "the seventies." When a foundation as solid as a rock was sought by the builders of the beautiful structure now occupied by the Club, weeks were consumed in driving great piles into the ground and pumping out what seemed to be an inexhaustible flood. After months of perseverance, the foundation was laid and people ceased wondering and guessing. When the projectors of a home for lovers of sport and the higher art of developing the human body located their edifice on Sixth Avenue and Fifty-ninth Street, they did well, for their ancestors had sanctified that very ground. Up to fifty years ago a stream of water, originating east of Third Avenue, at or near Fifty-ninth Street, and fed by several springs, made its course close by where that street was filled in afterwards, and emptied into the lower ground, forming a lake of cold, spring water reaching from Lexington Avenue to Sixth Avenue, with the breadth of more than a block. This being upon Herr Beekman's land, was called "the Beekman Pond," and for many years proved the delight of skaters. There was not a skating pond like it within a hundred miles of the city. The first, the best and the last skating of the season was there, and on that pond the very best skaters in the world were developed. Upon sections of the Beekman pond were worked out the intricate but beautiful movements and figures of the science of skating with a perfection of art never before dreamt of.

Photo courtesy New York Public Library
It was, indeed, upon sections of the historical ground where the school of the art of skating found its home, for the so-called "march of progress" tended upwards in the city, and the symmetry of the pond as well as much of its usefulness, had to be sacrificed in time. Fifth Avenue was filled in across it, followed by Madison and Lexington. The disgusted stream, robbed of its birthright, plowed its way and hid its head under ground and rose to sparkle in the rays of the sun west of Fourth Avenue, forming a small pond there and again making its way underground beneath Fifth Avenue, running down to Sixth Avenue, and then building its roof under that avenue. The better part of that section extended from Fifth Avenue more than half way down and alongside Fifty-ninth Street, and was called Mitchell's Pond. The water was deep and very cold, and although surrounded by the embankments of the streets save on the westerly side, the longest skating season was always there, and there the New York Skating Club house was erected, a one-story frame building, but fully adequate for the purposes of the developers and illustrators of the beautiful art.

It has been said truthfully that "the skate made the skater," and that skate which fitted completely the requirements of the skater was invented by Oliver Brady, a clerk in the New York Post Office, but a lover of the art and a member of the N.Y.S.C. After that skates with clamps and heel-button, to be placed upon a laced shoe, were made. Blood circulating preventives such as strings and straps with kindling wood beneath to tighten still more the vise on the foot, were abandoned then, and the Dutch skate, with its turnover toe and the finer English apple-top, low runner skate were put with the back numbers. Although the New York Club skate made by Barney & Berry, then as now, and the far more expensive skate, made to order by Ward in Eighth Avenue, always preferred by artistic and professional skaters for keen temper and sharp edges, to say nothing of scientific curve, higher and touching the ice never more than a half inch, were looked upon with rapture by the skater, there was something more needed for the development of the art.

Eugene B. Cook, a civil engineer living in Hoboken, N. J., saving during the skating season, when he lives where the best skating is to be found, and, for forty years past, the best skater in the world, a member of the N.Y.S.C. in the height of its glory, in the seventies, gathered together from all sources, all fundamental movements and their developments and combinations, placing them in proper order according to difficulty of execution and proper order of progress for the learner. Mr. Cook gave
his system, the result of many years of study and hard work to the world, and it still remains the programme of all skating contests and congresses, as well as the most valuable library of instruction to learner and professional alike, although condensed into one page, letter size. 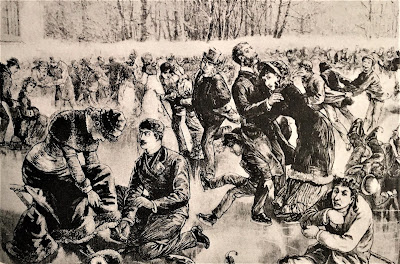 There were carnivals and balls and ball-playing in those days upon the ice of the N.Y.S.C. with illuminations and all the dances, with grotesque figuring and all in the height of enjoyment in the life-giving, frosty air of winter, while King Frost waved his scepter and laughed at the sport and hundreds of human beings, forgetting the breath of winter and risking frozen toes, gazed in wonder at the grace of the skaters, who wandered through the mazes of the dance like fairies in a beautiful dream. The great Skating Rink was built later, but won little patronage from the best skaters, who keenly loved their birthright and even the Central Park pond across the street and the great lake a mile away seldom attracted them to more democratic quarters where the season was always limited.

Upon the preemption of the Beekman Pond, obliterating the waters and blotting them forever out of sight, now stand great hotels and other buildings, and the old home of the skater, like many a landmark in our wonderful city, is now a memory of the past. Yet the memory remains, and what can never be taken from us is the enjoyment we have had there, although it be only such as "happifies"
us, the remembrance of "ye olden skating."

Skate Guard is a blog dedicated to preserving the rich, colourful and fascinating history of figure skating and archives hundreds of compelling features and interviews in a searchable format for readers worldwide. Though there never has been nor will there be a charge for access to these resources, you taking the time to 'like' on the blog's Facebook page at http://www.facebook.com/SkateGuard would be so very much appreciated. Already 'liking'? Consider sharing this feature for others via social media. It would make all the difference in the blog reaching a wider audience. Have a question or comment regarding anything you have read here or have a suggestion for a topic related to figure skating history you would like to see covered? I'd love to hear from you! Learn the many ways you can reach out at http://skateguard1.blogspot.ca/p/contact.html.
Posted by Skate Guard Blog at August 31, 2021
Email ThisBlogThis!Share to TwitterShare to FacebookShare to Pinterest
Newer Post Older Post Home
"As a rule an author has one or two popular ways of contrasting the past with the present. He can treat the past as lying in comparative doleful ignorance, or he can explain that the past was infinitely superior to the day we live in. Of course, either method is the popular journalism of the moment, and in reality there is no sharp contrast, but a gradual transition which leads the past into the present." - Joel B. Liberman, Skating Club Of New York