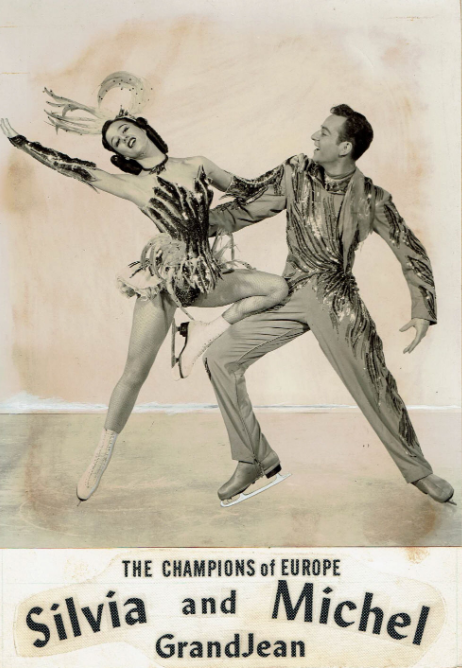 At the turn of the twentieth century, Ali, Jules and Arnold Grandjean-Perrenoud-Contesse, the three sons of a clock and watch maker from the Sagne valley, became friends with a group of sportsmen and caught the sporting bug themselves. Arnold was the most successful, winning the Swiss Championships in cycling in 1911 and 1912 and competing in the Tour de France. Together, they opened a small bicycle store in Fleurier and began designing their own line of bicycles - the Allegro. Eventually, two younger brothers, Tell and Ulysses Grandjean, joined the family business. In 1923, Arnold, Tell and Ulysses built the first Allegro factory in Neuchâtel and expanded their line to include motorcycles. From 1925 to 1927, Tell was Switzerland's champion in motorcycle racing. He even participated in side-car races with his wife. Little did he know at the time that his children would grow up to be Europe's best pairs figure skating team. 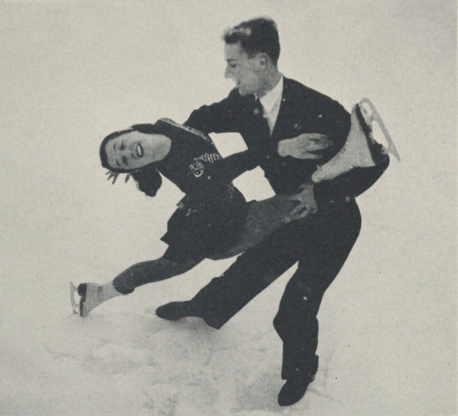 Michel Olivier Grandjean was born on April 12, 1931; Silvia Odette Grandjean three years later. Adopted separately by Tell Grandjean, they learned to skate at the Patinoire De Neuchâtel as youngsters during World War II. A skating coach with a good eye suggested that they skate as a pair and together, they both quickly showed promise, earning the Gold medals of the Swiss, English and Austrian skating federations. Following the War, they divided their training time between Switzerland and Great Britain. In an October 1960 interview in the Swiss newspaper "L'Impartial", Michel told reporters, "Fortunately for both of [us as] athletes, [our] parents were understanding. For three years, we could train in Monruz in winter and London in summer, under the direction of the Swiss, [Arnold] Gerschwiler." While in England, Silvia and Michel also studied under renowned ice dance coach Gladys Hogg for a time and took ballet lessons. 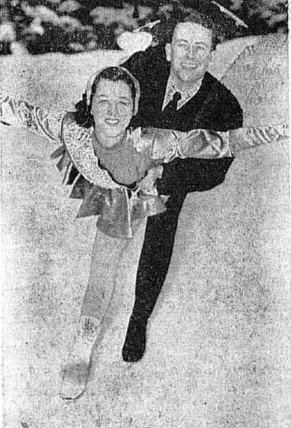 Silvia and Michel entered the international skating scene with a bang at the 1951 European Championships in Zürich, finishing just off the podium in fourth behind Jennifer and John Nicks of Great Britain. At the World Championships in Milan that followed, they placed a credible seventh of the twelve teams competing. Succeeding Elyane Steinmann and André Calame of Lausanne, they claimed their first of three Swiss pairs titles in Flims in 1952. As the top ranked Swiss pair that year, they were entered in the European Championships in Vienna, Winter Olympics in Oslo and World Championships in Paris. Quite incredible considering their lack of international experience, their lowest placement in the three events was seventh. In 1953, Silvia and Michel successfully defended their Swiss title in Arosa, defeating Susy Holstein and Willy Wehl and Albertine and Nigel Brown. At the World Championships in Davos that followed, they lost out on a spot on the podium to the Hungarian duo of Marianna and László Nagy by half a point.

After winning their third and final Swiss title in Villars in early 1954, the siblings made history in Bolzano as the first pairs team from Switzerland to claim the European title. In their final competitive outing, the 1954 World Championships in Oslo, Norway, they endured frigid, thirty below temperatures and skated one of the best performances of their career. "L'Express", on February 7, 1954, reported that "the [top] two couples presented very good programs". At the end of the day, the judges gave first place to Canadians Frances Dafoe and Norris Bowden and 10.486 points and 17.5 placings - and second place - to the Swiss siblings. 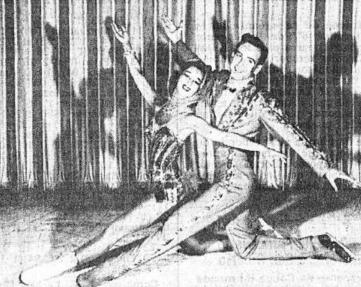 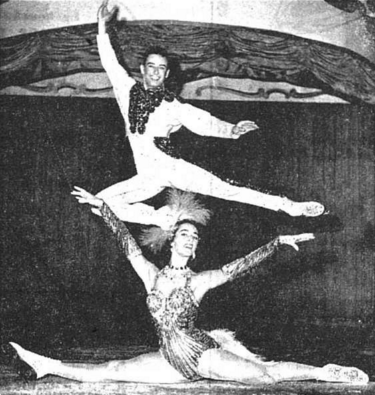 Silvia and Michel were headliners of the Grand Gala Artistique at the Patinoire De Neuchatel in the early fifties, which brought in an international cast of skating stars of the era including Barbara Ann Scott, Hans Gerschwiler, Jean Westwood and Lawrence Demmy, Gundi Busch, Jimmy Grogan, Alain Giletti, Liz Manley's future coach Peter Dunfield and Trixi Schuba's future coach Leopold Linhart. Skating alongside these greats gave the Swiss siblings a taste of show biz. Although Swiss audiences were very disappointed to see them go, Silvia and Michel departed from Paris in 1954 via plane and took up residence on East End Avenue in New York City while they awaited the start of their professional careers. 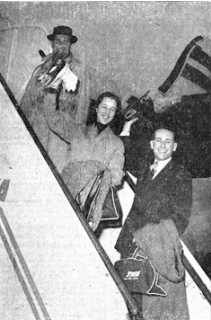 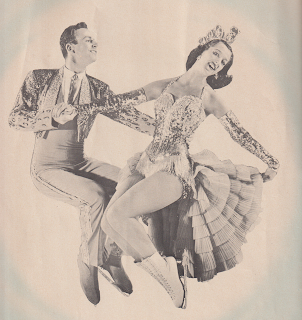 Joining the cast of the Ice Capades, Silvia and Michel really benefited from performing alongside established stars of the professional world like Donna Atwood and Bobby Specht and Ája Vrzáňová. American crowds warmed up to their very European style quickly. On December 27, 1955, "The Spokane Chronicle" said they "move with seemingly effortless grace." One of their signature numbers was an elegant program set to Claude Debussy's "La mer". 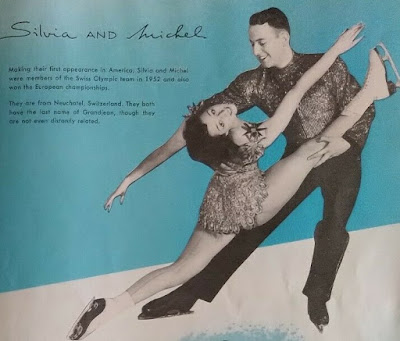 In 1958, Silvia and Michel left the Ice Capades and joined the cast of Holiday On Ice, performing in shows in the United States, Canada, Mexico, Europe and North Africa. In early 1962, Silvia announced her decision to leave the tour. She married a Monsieur Guyonneau, a French industrialist in La Coudre, only a month later. In a July 1992 interview in "L'Express", Silvia reflected, "I found a man on my way, I became a wife and I left with regret the entertainment world that I so love." Morris Chalfen renewed Michel's contract with a new partner. He joined the Asian tour for a time before moving to America. He passed away on December 11, 2010 in Pennsylvania at the age of seventy nine. Roy Blakey recalled, "I was impressed with his quiet elegance and charming accent. Also his wonderful joy for life and great sense of humour. He loved to travel and his Christmas cards always contained a photo together with his long time partner Alex Mangas from their most recent foreign adventure. He was a beautiful skater and a terrific person who is sadly missed." 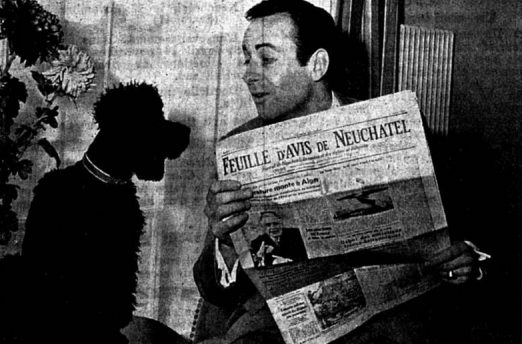 Michel Grandjean and his dog Domino

To this day, Silvia and Michel remain the only pairs team from Switzerland ever to win the European title or a medal at the World Championships. Whatever the future may hold, these siblings from Neuchâtel certainly took advantage of their family's sporting heritage and sped to the finish line first.

Skate Guard is a blog dedicated to preserving the rich, colourful and fascinating history of figure skating and archives hundreds of compelling features and interviews in a searchable format for readers worldwide. Though there never has been nor will there be a charge for access to these resources, you taking the time to 'like' on the blog's Facebook page at http://www.facebook.com/SkateGuard would be so very much appreciated. Already 'liking'? Consider sharing this feature for others via social media. It would make all the difference in the blog reaching a wider audience. Have a question or comment regarding anything you have read here or have a suggestion for a topic related to figure skating history you would like to see covered? I'd love to hear from you! Learn the many ways you can reach out at http://skateguard1.blogspot.ca/p/contact.html.
Posted by Skate Guard Blog at October 14, 2017
Email ThisBlogThis!Share to TwitterShare to FacebookShare to Pinterest
Newer Post Older Post Home
"As a rule an author has one or two popular ways of contrasting the past with the present. He can treat the past as lying in comparative doleful ignorance, or he can explain that the past was infinitely superior to the day we live in. Of course, either method is the popular journalism of the moment, and in reality there is no sharp contrast, but a gradual transition which leads the past into the present." - Joel B. Liberman, Skating Club Of New York