Double Salchows In The Dark: How Skating Coped With The Blackout 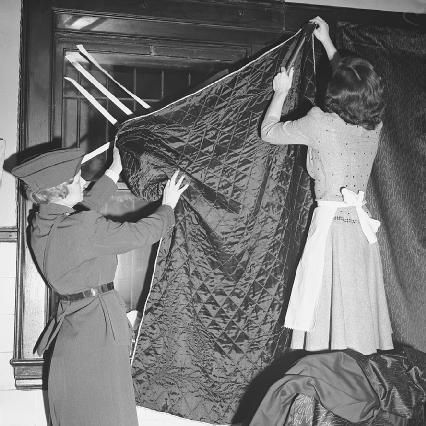 "The standard of dancing is very high indeed. There about about nine dances done as a matter of course in the public dance sessions... The only departure from normal is the Blackout which is very complete." - Jack Irvine, "Skating" magazine, May 1942

During World War II, the Blackout practice was serious business. To throw off enemy bombers, citizens in many countries were required to shield windows and doors with curtains, cardboard, tar or paint to block light from escaping. Street lights were dimmed or turned off and it was a common occurrence for city residents to report neighbours who, by keeping lamps on or candles burning, failed to properly comply, putting entire streets or blocks at greater risk of attack. Public spaces were often obvious targets and thus, many skating rinks only managed to stay in operation under Blackout conditions.

When we think of the Blackout, one of the first places we think of is England. Londoners were forced to barely subsist on meagre rations and contend with fuel oil shortages and gas rationing. They spent more of their time doing War work and running at the sound of sirens to their Anderson shelters than they did living. For some, figure skating was their sole escape from this dreary existence and the Richmond Ice Rink was their mecca. The late Richard Meacock recalled, "Nothing during the War could close the rink. Allied servicemen from all over the world insisted that it be kept open. Besides the kids of London couldn't do without it. So special was the rink considered - a meeting place of discipline, excellence and fun without alcohol - that the government made a special order to black out the five hundred foot long building to allow it to remain open... After all, the Richmond rink was an institution where more than 4 million people learned to skate." Despite the Blackout efforts, a two thousand pound bomb was dropped on the rink's engine room. Miraculously, it didn't explode thanks to some quick thinking by the rink's staff.

In her book "Figure Skating: The Evolution Of Dance On The Ice", Lynn Copley-Graves noted that in Great Britain, "Each rink had a shelter. Skaters did not have to take their skates off during an air raid, but they were asked not to leave their gas masks in the cloakrooms." Before it suspended publication, the "Skating Times" published an article on air raid procedures. At the Westminster Ice Rink, the glass roof was shattered during one such raid. Skaters in Aberdeen, Dundee and Kirkcaldy continued to practice in similarly perilous conditions. Historian Dennis Bird recalled, "Many rinks had glazed roofs, so blacking-out was a major operation - particularly as many rinks' staffs had been called up for service in the Armed Forces."

While skaters in Europe were practicing loops in the dark, in Canada and the United States figure skating was flourishing more than ever before. However, the bombing of Pearl Harbor on December 7, 1941 forced North Americans to wake up to the possibility of an enemy attack on home soil. Blackout drills were advertised to U.S. citizens were in advance and by 1942, Blackouts became the norm on the West Coast. In early 1942, Joan Tozzer wrote to Theresa Weld Blanchard, explaining, "We have breakfast at 7, lunch at 12, and supper at 6, as the Blackout starts at 7:30. If you are asked to go out to dinner, you go at 5, eat at 6, and get home by 7:30 unless the hostess is kind enough to ask you to spend the night." In December of that year, the Oakland Figure Skating Club even presented their carnival "Ice Vanities" behind a Blackout curtain. The stars of the show included Maribel Vinson Owen and Guy Owen, Bobby Specht, Freddie Tomlins, Norah McCarthy and Irene Dare.

On the whole though, the most affected American skating clubs were (quite obviously if you think about it) the outdoor rinks.  In his 1948 history of the Cambridge Skating Club in Massachusetts, Arthur M. Goodridge recalled, "With the war came the 'Blackout'. In October 1942 the Club asked the Air Raid Precaution Warden of the Committee of Public Safety for advice as to how much the rink lights should be dimmed. A polite letter was received in reply but it included the statement 'We are sorry to inform you that all illuminated outdoor activity has been prohibited for the duration.' Fortunately the War Department on November 20th issued new and quite definite regulations permitting lighting by 40 watt bulbs with 900 shades at least twenty feet apart. A plan of lighting was promptly submitted by Howard M. Turner, an Incorporator of the Club, and an engineer. The Blackout Committee, fearing reflection from the ice, allowed the club to install one-third (19) the 57‘ lights asked for and only on a trial basis. With the shortage of materials and workmen these were not in operation until January 2nd. Eventually the original lighting plan was approved and men working in the coldest weather completed the installation. It is worthy of note that although these 57 lights, hanging low over the rink, gave ample illumination, they were practically invisible to a passerby in the street! Perhaps it should also be noted that before any of these lights were put up evening skating went merrily on by the light of a very bright street lamp over the fence." 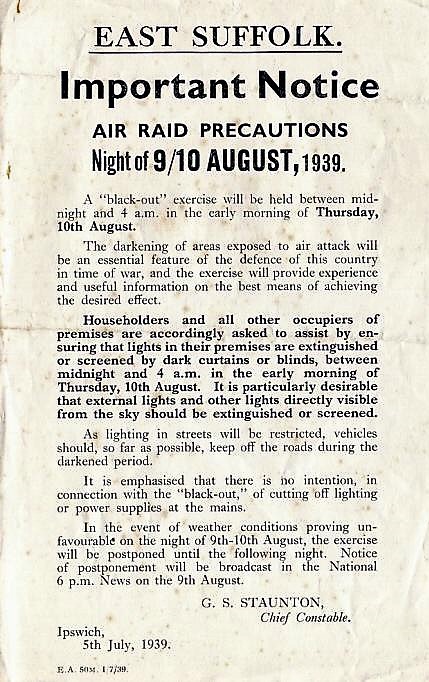 Some perhaps didn't take the Blackout as seriously as they ought to have. In November 1941, Tasmanian skating rink owner Thomas Alfred Humphries entered a guilty plea to a charge of permitting light to emit from his skating rink during a Blackout test. The November 15, 1941 issue of the "Advocate" noted that this was the very first case of a business owner in Tasmania defying the Civil Defence (Emergency Powers) Regulations and that during the test, "A messenger, a boy scout, was sent to the rink to inform the occupier that the lights were still showing. No alteration was made. Five minutes later, two more messengers were dispatched, but the lights continued to burn until the end of the Blackout." Mr. Humphries claimed that when the sirens sounded, he had been trying to clear people from the rink and thirty had refused to leave. He also claimed that he "was afraid that there might be an accident, and that he would be held responsible." He was only fined five pounds - the maximum penalty was five hundred - and sent on his way with the warning that he could consider himself as "being treated with extreme leniency."

We have all heard of Seasonal Affective Disorder. Hell, many of us suffer from it to some degree I think. During World War II, many English doctors began diagnosing patients with 'Blackout anaemia': depression as a direct result of depression from the Blackout and poor nutrition. For many, a couple of hours here or there figure skating would have provided such a wonderful relief from that darkness. Then as it does today, skating saves lives.

Skate Guard is a blog dedicated to preserving the rich, colourful and fascinating history of figure skating and archives hundreds of compelling features and interviews in a searchable format for readers worldwide. Though there never has been nor will there be a charge for access to these resources, you taking the time to 'like' on the blog's Facebook page at http://www.facebook.com/SkateGuard would be so very much appreciated. Already 'liking'? Consider sharing this feature for others via social media. It would make all the difference in the blog reaching a wider audience. Have a question or comment regarding anything you have read here or have a suggestion for a topic related to figure skating history you would like to see covered? I'd love to hear from you! Learn the many ways you can reach out at http://skateguard1.blogspot.ca/p/contact.html.
Posted by Skate Guard Blog at November 11, 2017
Email ThisBlogThis!Share to TwitterShare to FacebookShare to Pinterest
Newer Post Older Post Home