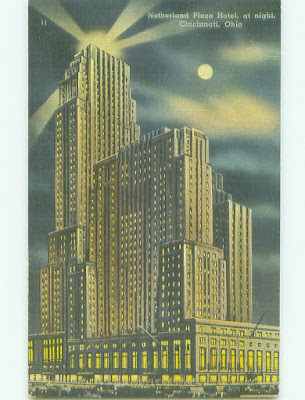 As bombs reigned over Europe during World War II, residents of Cincinnati, Ohio flocked by the thousands to the Netherland Plaza Hotel to escape the summer heat and take in the novelty of one of the country's hottest trends: the hotel ice show. The eight hundred room hotel on Fifth and Race Streets, completed in 1931 to the tune of thirty million dollars was - as far as venues for hotel ice shows went - as good as it got.

The hotel was part of a half-block area building which included the Carew Tower and many stores. It was in the Restaurant Continentale (aka Continental Ballroom) that the Netherland Plaza Hotel's ice shows reigned supreme. You could be served your supper by head waiter Albin Bratfisch for $1.75 or a cocktail by sommelier Toni Lamare for $0.40 and be entertained by dizzying spins and electrifying jumps on tank ice, accompanied by live musicians. It was a spectacle that many in Cincinnati had never been exposed to. In his book "States of Desire Revisited: Travels in Gay America", Edmund White recalled his experience at the Netherland Plaza Hotel's ice shows thusly: "During World War II my mother and I would inch into town on rationed gas on a weekday afternoon and I'd lunch on a tidy little chicken pot pie and a single scoop of chocolate ice cream in a frosted silver goblet as we watched an ice show at the Netherland. Everything about the skating seemed fascinatingly 'indecent'; the darkness of the room by day, the gently misting slab of ice, the band members lit from below by their hooded lamps, the fixed impersonal grins of the skaters, their thick makeup, the slash of blades and the sudden shower of ice dust through the gelled spotlights..." 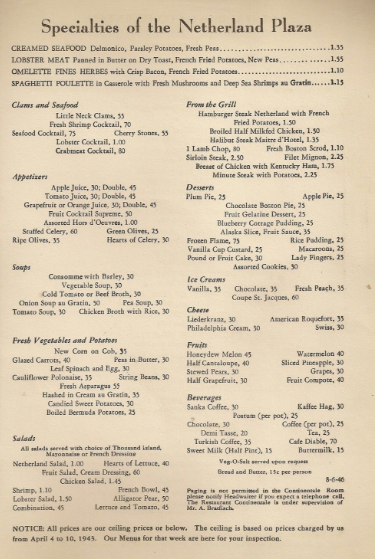 1943 menu from the Netherland Plaza Hotel


The format for the shows was quite consistent throughout the forties. There would usually be two or three strong solo acts (one usually being a comedy or novelty act), an adagio pair, a crooning emcee, live band, ensemble numbers and a six woman line act known as The Six Lovely De-Icers. The November 7, 1942 edition of "Billboard" magazine featured a review of one such production: "Donn Arden turned in a corking production job on the fourth edition of the Frederick Bros. Ice Revue Of '42, which bowed in here Friday (16). Toting the same principals as the preceding show, with the exception of Edi Scholdan, skating juggler who replaced Red Bennett, and with only change in the Six Lovely De-Icers line, unit moves swiftly and smoothly, is excellently gowned and in general stacks up stronger than any of its predecessors. Billy and Betty Wade, most popular and talented team ever to show on ice here, now in their 14th week, register their usual success in three numbers. Mary Jane Lawson, 16-year-old figure skater, now in her 10th week, continues to please with her refreshing style and outstanding routines. Edi Scholdan, in addition to good skate work, gives the unit extra entertainment value with his pleasing juggle work. Ronnie Mansfield, WLW tenor, still upholds the show's good continuity with his emcee warbling. The Six De-Icers never worked better, and Burt Farber's orchestra continues to turn in a good job on the dance and show chores. The Restaurant Continentale, which opened its season with icers last June 28, will continue with them until late in December, according to present plans." 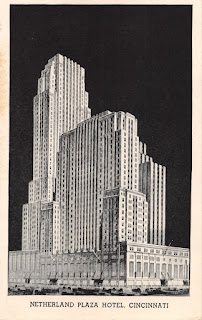 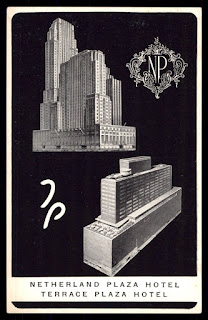 By the following year, the hotel adopted an all-year ice policy and "Billboard", on November 27, 1943, described the show thusly: "This swanky chamber; the town's leading dine, dance and show bistro, continues to pull a walloping business with its steel-blade frolics, a steady feature here since June, 1942. The quality of the room's ice revues has fluctuated little, but the new layout which opened Tuesday (16) shapes up as the soundest offered here since the steady ice diet made its blow. Starred is Adele Inge, easily the most talented ice principal ever to show here. She uncorks a set of ice-skate surprises that had the first-show clientele applauding almost continuously. Her wizardry on the ice is punctuated with a vast assortment of daring spins, whirls and leaps across that made for thrills, and she wraps it all up in a package that spells confidence, showmanship and polish. A highlight is her forward somersault without the use of her hands, but she anti-climaxes things by springing with it too early in her first season. Miss Inge is destined for a long stay. Also new in the current offering are Genevieve Norris and Gerry Verden, a nice-appearing youthful pair, who fared okay with their adagio nifties and standard skate bits. Need a little more work together to stack up with some of the teams seen here in the past. Producer Donn Arden has turned in his usual bang-up job with this latest offering. Taking the circus as the locale, Arden has succeeded in capturing the big top spirit with a fine assortment of routines, excellent wardrobe and appropriate circus 'business' and music. His best has the Six Lovely De-Icers in a high-school horse routine. Not only is it novel, but the costuming and trappings are outstanding. The Six Lovely De-Icers, incidentally, have never shown to better advantage than in this show. Only holdover from the opening layout is lovely Dotty Rodgers, who has become a prime favourite here. The four Magazine Cover Girls have added a bit of skating ability to their good looks to make for a sounder asset. Norman Ruvell, who enters his fourth month here as singing emcee, gives the revue excellent pacing with his circus-spieler chatter and his quality barltoning of the show's music, both pops and semi-classics. Some of those highly touted singing juves have nothing on this lad, either in looks or ability. Discharged from the army eight months ago and now in 4-F, Ruvell is swoon material and definitely movie timber."

In the subsequent two years, featured stars of the Netherland Plaza Hotel's ice shows included Viennese born New Yorker Trudy Schneider and former U.S. Eastern Champion Joan Hyldoft, who held the title of Miss Cincinnati. It wasn't uncommon at the time for hotel show skaters to move around from city to city doing stints in different hotel skating productions, so the casts often varied slightly even if the format remained markedly consistent. 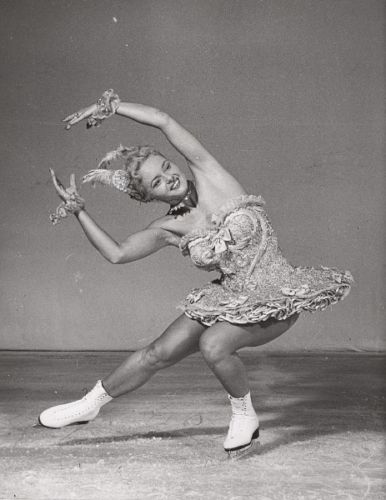 I have to share just one more of these "Billboard" reviews with you, mostly because I just love the "extra, extra! read all about it!" tone of the unnamed reporter who covered these shows. This one comes from the October 22, 1946 edition: "With W. Carl Snyder out as icer impresario here, Truly McGee is given the opportunity to cook up this latest tanker strictly on her own. The finished product, sluggled 'Tally-Ho', stacks up as one of the gayest and most entertaining offerings to play here since the room adopted its icer policy six years ago. What's more, it's done with one of the lowest budgets ever allotted the show. New icer boasts of no particular star but Miss McGee takes a capable assortment of tank talent, plus an outstanding line (6) all look good by her deft production weaving. The show takes as its theme hunting in its various forms, with enough tongue-in-the-cheek, leeway to allow for some cute tricks and effects. Lighting is good, the wardrobing is brilliant and original and the show's pacing doesn't allow for a single drag. Norena and Morris, mixed pair, who looked just like another ice team in the previous show, uncork an assortment of new wrinkles, lifts and spins that make them appear as outstanding in their field. They copped the show's skating honours. Bain Lightfoot and Jinx Clark, new members, show off well individually and as a team, and add much with their appearance and youthfulness. Lightfoot, however, should do something for that unruly hair. In skating ability and looks, the Six De-Icers top any of their predecessors. The girls are Glorida McGowan, Jane Montanary, Martha Collins, Mary Lou, Betty Mueller and Lillian Byers. Marian Spellman again steals much of the show with her topnotch song-spinning. She's worthy of a crack at a good air shot. Show's new male warbler, Paul Westbrook, turns in a good effort, but he was a bit nervous and too dramatic at his first look-in. Burt Farber does his usual fine job of directing his band on the show stint. His ditching of the three fiddles in favour of three brass adds immeasurably to the ork's solidness on the show tunes." 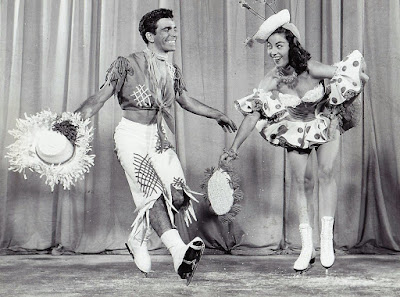 If one of the names from that last review doesn't sound familiar, it should. Remember Jinx Clark? She was the tough talking, shotgun toting owner of the haunted pub in the 2014 Skate Guard blog "The Ghost, The Skater And The Shotgun".

Not to be confused by the tour of the same name, a new "Holiday On Ice" show opened at the Netherland Plaza Hotel on February 24, 1947. It featured Vince and Gloria Haydock, Lew Nelson and Marilyn Ross and feature star Jack Roach, who also signed on to coach skaters at the then-new Cincinnati Arena which was under construction on "the Old Chester park site." The format changed slightly in 1947 and by 1948, the hotel's management had slashed the budget for its ice shows significantly. June Arnold, Bruce Sheffer and Bissell and Farley appeared in 1948, but with the lowered budget, the line performers had by then been eliminated altogether. Ice shows at the Netherland Plaza Hotel were on their way out.

In May 1956, the Netherland Plaza Hotel was sold to the Hilton Hotel chain. It continued to operate sans ice shows for many years and thanks to its designation of National Historic Register and National Landmark status in 1985, the hotel won't be going anywhere anytime soon. You might not be able to get a goblet of ice cream and a chicken pot pie for $1.75 in the hotel restaurant these days but the next time you're in Cincinnati, turn off the WKRP and listen quietly. You just may hear the etching of blades into tank ice, the clatter of silverware and the echo of Lutzes and laughter... How times have certainly changed.

Skate Guard is a blog dedicated to preserving the rich, colourful and fascinating history of figure skating and archives hundreds of compelling features and interviews in a searchable format for readers worldwide. Though there never has been nor will there be a charge for access to these resources, you taking the time to 'like' on the blog's Facebook page at http://www.facebook.com/SkateGuard would be so very much appreciated. Already 'liking'? Consider sharing this feature for others via social media. It would make all the difference in the blog reaching a wider audience. Have a question or comment regarding anything you have read here or have a suggestion for a topic related figure skating history you would like to see covered? I'd love to hear from you! Learn the many ways you can reach out at http://skateguard1.blogspot.ca/p/contact.html.
Posted by Skate Guard Blog at March 26, 2018
Email ThisBlogThis!Share to TwitterShare to FacebookShare to Pinterest
Newer Post Older Post Home
"As a rule an author has one or two popular ways of contrasting the past with the present. He can treat the past as lying in comparative doleful ignorance, or he can explain that the past was infinitely superior to the day we live in. Of course, either method is the popular journalism of the moment, and in reality there is no sharp contrast, but a gradual transition which leads the past into the present." - Joel B. Liberman, Skating Club Of New York