On February 23, 1923, Canadian and American skaters gathered in Ottawa, Ontario for the very first North American Championships, then known simply as an 'International Figure Skating Competition'. In addition to being the first North American Championships, this event also marked the first time a Canadian skating club hosted an international competition sponsored by the Figure Skating Department of the Amateur Skating Association of Canada, then the governing body of figure skating in Canada.

The event came about because the Minto Skating Club had wanted to host an international competition in singles and fours, which they had done several times previously outside of the Figure Skating Department's auspices but using ISU rules. This time, they 'played nice' and asked the permission of the ASA. In cooperation with A. Winsor Weld, the President of the newly founded USFSA, the event was formed as a "close, friendly competition" between skaters of two nations. 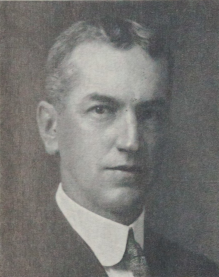 Louis Rubenstein and A. Winsor Weld, then Presidents of the Figure Skating Department of the Amateur Skating Association Of Canada and the USFSA

In looking at the results of the competition, the event was essentially a draw. American skaters claimed the top two spots in both of the singles competitions, while the pairs title was won by Canadians Dorothy Jenkins and Andrew Gordon McClennan. In the fours competition for the Connaught Cup, donated by the Duke of Connaught, the Minto Four of Elizabeth 'Bet' Blair, Florence Wilson, Philip Chrysler and C.R. Morphy outskated teams from New York City and Boston. 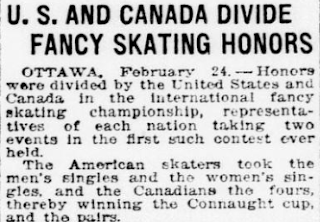 Interestingly, the deed of gift for the Connaught Cup stated that the contest be held in Ottawa, and after this event the Cup wasn't awarded again at the North American Championships until 1933, when the Duke agreed the cup could move from Ottawa. With the Americans taking the men's and women's titles and the Canadians the pairs and fours, the 'tiebreaker' was in essence the informal Waltzing competition, which featured an impressive thirteen couples. The winners were Florence Wilson and Joel B. Liberman. She was from Ottawa; he from New York City. 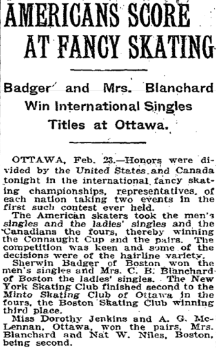 To gain a better sense of what the competition was like, we can look to the memoirs of Joseph Chapman, penned in 1936: "Once while staying at Placid, during the winter of 1922-23, I received a very nice invitation to act as a judge in what I believe were the first North American Championships ever staged. I was a duly qualified judge under the regulations of the newly formed United States Figure Skating Association, and by these new championships, established through the friendly cooperation of the Canadian Skating Association and our own association, an opportunity was to be given for competition in skating between the Canadian and 'USAtian' enthusiasts. Ruth and I boarded a local train late one afternoon running from Lake Placid to Tupper Lake, in which latter village we landed at seven p. m. and forty below zero. We spent a hectic night in the distinctly unsophisticated six-room hotel in the village, barely able to keep ourselves warm by not only using all the blankets available in our room but also the carpet off the floor. Next morning we boarded another local train running through the back country between Tupper Lake and the town of Ottawa, Canada. Had there been no tracks upon the right-of-way occupied by the small railroad upon which we had to depend, no one could have recognized that right-of-way from any other back-country road. In Ottawa at the Chateau Laurier we found that Tee Blanchard, Nat Niles, Sherwin Badger and Bea Loughran, the United States competitors, were already on hand. Early next morning all of us adjourned to the semi-private rink then used by the Minto Skating Club and it was on this ice surface that I first had the pleasure of meeting Melville Rogers, a handsome young man who was to compete for Canada. It may be some surprise to you to be told that in those particular times at least, the Canadian figure skating ability was by no means on a par with the ability of the skaters from the United States. In the competition which I judged, Sherwin Badger, then U.S. man champion, easily won first place, with Nat Niles a fairly close second and Melville Rogers a trailing third. Bea Loughran and Tee Blanchard fought to the death for first place in the ladies’ singles. Bea [demonstrated] crisp and sweeping vigour [in] her school figures, [showing] the convincing bite of her skate blade as she performed her 'Salchow Rockers', as compared to the more gentle 'Fuchs Rockers' of Tee Blanchard, those Fuchs Rockers as taught by George Mueller to the Boston Skaters, by which they had been greatly assisted in winning championships up to that time... In the evening all hands adjourned to the public rink in Ottawa for the free skating, 'Fours', and dancing competitions. I had believed that I was experiencing something in the nature of cold at the morning events, but I found on arriving for the evening performances I hadn’t 'seen nothing yet' as far as cold temperatures were concerned. I had no thermometer close at hand and therefore can make no guess as to whether the air in the place was very close to the temperature at which air becomes liquid, but I know that within five minutes after my arrival my blood had at least become solid. I still have the vision of Mr. and Mrs. Henry [Wainwright] Howe sitting on a radiator, as though it were their last hold on life, in their endeavor to keep some slight memory of what heat felt like as they waited for their cue to take the ice in the waltz competition, for be it known to you that in those days at least the rinks in Ottawa were served by Mother Nature alone as far as the freezing of the ice was concerned - and therefore no more effeminate obstructions were placed in the walls of those rinks to stand between the vigour of our Universal Mother and the struggling circulation of us skaters - than was absolutely necessary. Our delightful Canadian friends, however, were well used to these conditions and their champion Four of that day performed as though in tropic heat, vanquishing the frozen, first New York 'Four' with agile ease. It was a surprise, however, to me - and maybe to you - to see how inferior the Canadian ice-dancing of that era turned out to be. At the gay party held next day on the outdoor rink of Government House, where we were courteously welcomed by the then Governor-General Byng, of Canada, and his Lady, all of our Canadian friends waltzed with gay abandon but in a 'form' leaving much to be desired. But how the level of their skating has risen! What envied perfection they have reached today in their dancing, group skating, and individual work!"

They may not have even attempted double Lutzes led alone quads, but the brave skaters and judges who convened in Ottawa in 1923 didn't have the luxuries of air travel or heated rinks. They braved the elements to pursue their passion at a time long before the television cameras were rolling or prize money was doled out. They did it because they loved figure skating.

Skate Guard is a blog dedicated to preserving the rich, colourful and fascinating history of figure skating and archives hundreds of compelling features and interviews in a searchable format for readers worldwide. Though there never has been nor will there be a charge for access to these resources, you taking the time to 'like' on the blog's Facebook page at http://www.facebook.com/SkateGuard would be so very much appreciated. Already 'liking'? Consider sharing this feature for others via social media. It would make all the difference in the blog reaching a wider audience. Have a question or comment regarding anything you have read here or have a suggestion for a topic related to figure skating history you would like to see covered? I'd love to hear from you! Learn the many ways you can reach out at http://skateguard1.blogspot.ca/p/contact.html.
Posted by Skate Guard Blog at April 13, 2018
Email ThisBlogThis!Share to TwitterShare to FacebookShare to Pinterest
Newer Post Older Post Home