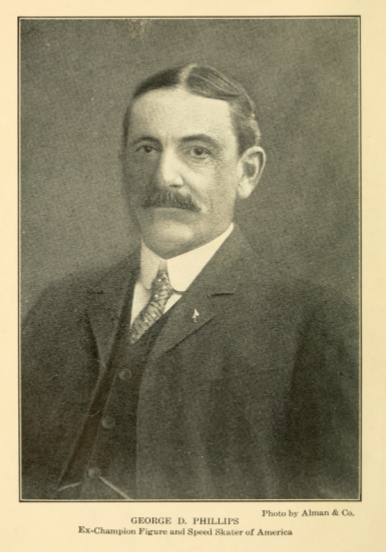 "There is one great advantage of figure skating as a sport, and that is age is not a potent factor of success, as past history shows that many of our best-known experts were men well on to middle life. It certainly is an enemy of dyspepsia and kindred troubles, and is the most exhilarating though not the most violent sport known in this country." - George Dawson Phillips, "Harper's Weekly", January 7, 1893

Born September 9, 1856 in New York City, George Dawson Phillips was the son of James and Mary (Seguine) Phillips. He practically grew up on the ice and on December 1867 at the age of eleven won his first skating title - a one mile speed skating race - on 46th and 5th Avenue, the future site of the grand Windsor Hotel which burned to the ground in a devastating fire on St. Patrick's Day, 1899.

Like that fire, George raced through his early skating career, dominating American speed skating competitions for twenty years from 1867 to 1887. He competed against Norway's Axel Paulsen, won the Championships Of America in the two hundred and twenty yard, five, ten and twenty five mile distances and set records which remained unbeaten until the late nineteenth century. In his book "How To Become A Skater", writer Frederick Toombs recalled, "During 1883 and '84 G. Phillips created a furor by sprinting one hundred yards in '10 3-58, 220 yards in 22 3-58, and a quarter mile in 44 1-5s, from a running start and without wind." At only five foot five and between one hundred and twenty and one hundred and thirty five pounds, George earned himself the nickname 'The Spider'.

In 1886, near the end of his speed skating career, George reinvented himself as a figure skater. Acclaimed for his cross-cut vines, he finished third at the Championships Of Canada in February 1890 behind Louis Rubenstein then tied with him at the 1891 Championships Of America. In 1892, he claimed the American title with a fifty one point lead over his closest rival. "Harper's Weekly" noted that he gave a "very clever exhibition" at the event but that without Rubenstein in attendance the event "was something of a disappointment". He returned to win the Championships Of America in Hoboken in 1895 and at the St. Nicholas Rink in New York City in 1897. However, his third win was shrouded by controversy. On January 27, 1897, The New York Tribune reported, "It was learned last night that one of the contestants will challenge Phillips. This man maintains that Phillips managed the Ice Skating Palace last winter, and therefore is a professional. Phillips asserts that his only relation to the Palace was as a broker in getting a loan for it. The protestant, however, will tonight exhibit two receipts, which purport to have been given by Phillips for salary paid him as a manager."

Competitors at the 1897 Championships Of America

A businessman by trade, George was also an accomplished oarsman with the Hudson Boat Club and long time member of the New York Athletic Club. An 'old time fancy skater' through and through, he prided himself on precision and strong technique and looked down upon the trend for 'showiness' amongst skaters around the turn of the century. In "Harper's Weekly", he wrote, "There is no recognized sport in which in the fine points are so little understood by the general public as in figure skating. This is proven by the applause which frequently follows the exhibitions of showy skaters as compared to finished and methodical competitors. In many of our amateur championship competitions this has been the case, and reporters of our daily papers have been the worst offenders, often putting their ideas in print when they have been in direct opposition to the judges' decisions."

Further evidence that  George resisted the trend for 'showy' skating presented itself in the January 30, 1901 issue of "The New York Daily Tribune". They reported, "Something new appeared at the local rinks last night, and while the performance was going on George D. Phillips, the old-time figure skating champion, and Dr. A. G. Keane, the present champion, fairly held their sides. Everybody else who saw the contortions of the skater were convulsed. Somebody said. 'Ragtime stunts on ice.' and the onlookers accepted the expression as the proper thing under the circumstances. At the end of the hockey game at the St. Nicholas Rink there was the usual scramble by the men. women, boys and girls to get upon the ice and enjoy skating themselves. Then an innovation appeared in the form of a youth of probably seventeen years. He wore skates of the old fashioned Dutch rocker sort, with short iron plates and with regular sleigh runner twists In front. Possibly the skates had something to do with the gyrations, and then again it may have been a nervous twitch of the muscles, combined with an erratic temperament. Whatever it was. the performance was one of the most remarkable ever seen on the ice. Cross-cuts were made backward and grapevines sideways. A spread eagle would suddenly turn into pirouettes, and hoops and ringlets were made as they were never made before in the memory of the oldest fancy skater. The young fellow did not mind the attention he created, but continued to cut those queer capers on the ice until it was time to close the rink. Several of the experts who tried to imitate him nearly broke their necks." 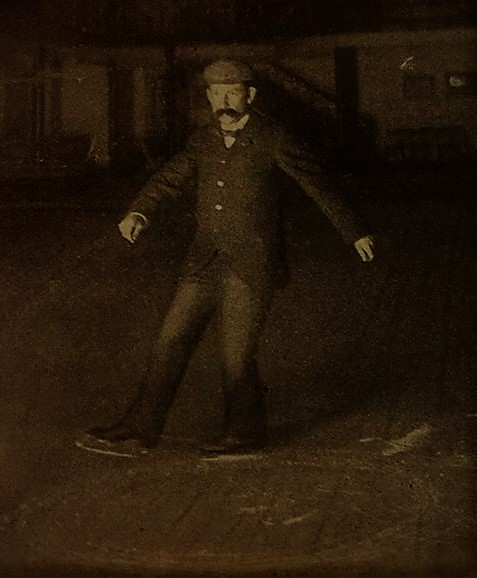 By the late nineteenth century, George finally retired from competitive skating. After the death of his first wife Charlotte Berry Corbett, he married Kentucky born Julia Biddle Coakley on April 29, 1905 and got in the ice manufacturing business. Julia got in the business of inventing space saving furniture. George also became involved with the International Skating Union of America, helping develop a committee for the Eastern Skating Union. 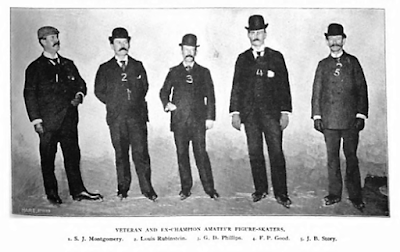 In November 1928 at the age of seventy two, George was honoured for his skating achievements by the Amateur Athletic Union at a gala banquet in New York City. He passed away on May 7, 1933 in Manhattan, New York at the age of seventy six. During his heyday "The Weekly Transcript" claimed, "In athletic circles, particularly skating, George D. Phillips is, without a doubt, one of the best known men in America." On January 5, 1959, George's wife Julia passed away the age of eighty eight. In her will, she left a bequest of ten thousand dollars to one Norman Thomas with a special provision: that the money be used "to promote peace and love among the people of the world and destroy hatred." A beautiful end to a fascinating story if there ever was one.

Skate Guard is a blog dedicated to preserving the rich, colourful and fascinating history of figure skating and archives hundreds of compelling features and interviews in a searchable format for readers worldwide. Though there never has been nor will there be a charge for access to these resources, you taking the time to 'like' on the blog's Facebook page at http://www.facebook.com/SkateGuard would be so very much appreciated. Already 'liking'? Consider sharing this feature for others via social media. It would make all the difference in the blog reaching a wider audience. Have a question or comment regarding anything you have read here or have a suggestion for a topic related to figure skating history you would like to see covered? I'd love to hear from you! Learn the many ways you can reach out at http://skateguard1.blogspot.ca/p/contact.html.
Posted by Skate Guard Blog at August 14, 2018
Email ThisBlogThis!Share to TwitterShare to FacebookShare to Pinterest
Newer Post Older Post Home