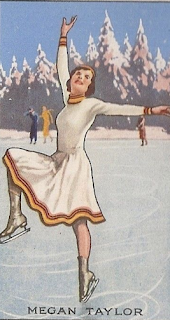 With its ice capped mountains and beautiful outdoor rinks, Switzerland was once the foremost destination for skating enthusiasts around the world. Over the years, the country has been the fictional setting of three Sonja Henie films ("Everything Happens At Night", "One In A Million" and "Thin Ice"), Claude Langdon's popular ice pantomime "White Horse Inn On Ice" starring Belita, and countless ice shows around the world. One such Swiss-inspired ice show, in the absolute unlikeliest of places, turned out to be a massive hit that the world has all but forgotten.
In the summer of 1939, just weeks before World War II broke out, Australian born businessman Sir John Robert Hugh McKenzie had a brain wave. McKenzie ran the J.C. Williamson Theatre Company which often brought in overseas entertainment for Australian and New Zealand markets and was well aware of ice skating's international popularity. Determined to bring a lavish ice show to Kiwi audiences but without a venue equipped to house such a production, he set to work transforming the stage at His Majesty's Theatre in Auckland into an ice rink. 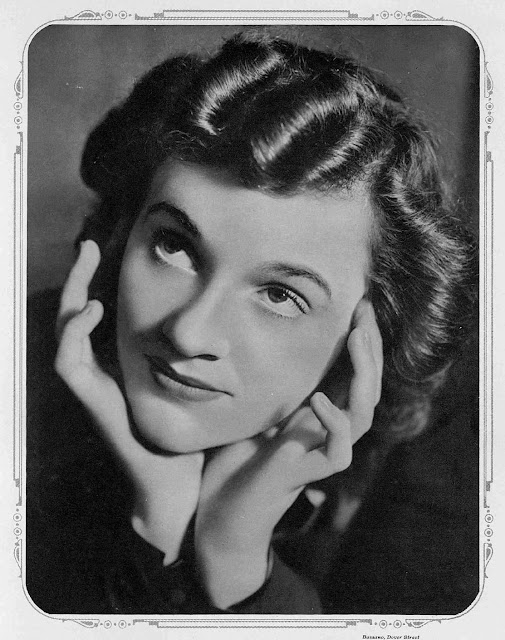 The Williamson Theatre Company's ice show was to be called "Switzerland" and would star two time World Champion Megan Taylor and her father and coach Phil, an accomplished stilt skater and barrel jumper. The production, which had already toured to packed houses in South Africa and Australia, was originally slated to open in New Zealand in September of 1939 but several challenges delayed the production. Seats had to be removed and the stage built up and made perfectly level so that the view from the theatre's front stalls was unobstructed. Then, of course, there was that nasty business of making ice. On December 17, 1939, the Taylor's arrived in Auckland with just six days to rework a Swiss fantasy on ice with their travelling cast of sixty skaters, including Australians, Britons and Canadians.

"Switzerland" opened two days before Christmas on 1939 to a sold out crowd. People from as far north as Whangarei and as far south as Taihape flocked to the New Zealand capital to see what all the fuss was about. They were treated by Leo Packer and his Orchestra performing Merry Tyrolean folk dance music when they sat on their seats. When the curtain opened, they laid eyes upon a glistening stage set with painted mountains, a Swiss chalet and a picture perfect ice rink. In the next day's issue of "The Auckland Star", an enthusiastic reviewer described the show as a "rushing ballet of skaters and skaterinas weaving and inter weaving in the glorious swing of the ballroom waltz. Ere the curtain fell this ballet in winged, steel-shod shoes had not only compelled admiration for the beauty of Tyrol folk dances, Can-Can, dainty minuet and 'Floradora' flourish; enhanced by the swift mobility of dancing on ice, but had aroused unrestrained enthusiasm by flashing into a military parade of kettledrum, flag and general drill with faultless swing, steadiness and precision - spectacle after colourful spectacle of the grace, beauty and exhiliration of skilful skating. Yet the ballet was but the pale halo round the central stars. Megan Taylor was dazzling in the highlights of classic precision and purity of form which had gained her world champion honours in the recognised competitive tests of the mistress. In lighter mood she displayed the expressive fire and colour of a Gypsy dance, and the dash of a champion unleashed in free skating. Phil Taylor champion in his own right both before and after his lovely daughter won her honours, lifted the pitch of the skate-song up to speedway recklessness in stilt stunts, daring jumps, and with Elsie Heathcote as partner, the hazardous refinements of adagio dancing on skates. The MacKinnon sisters [Patricia and Joy], of Canada, included also the thrilling adagio dance, whirling in their specialties, which ran to many beautiful variations possible only to skaterinas of superlative skill. Diana Grafton, Doreen Parr, Rita Bramley and Ronald Priestley concentrated on the expression of humour on skates with comedy dancing, the 'Boomps-a-Daisy' Polka by Miss Parr and Priestley, and Diana's dashing acrobatic numbers being especially appreciated. Scintillating personalities all these, yet none was more brilliant than that merry jester of the rink, Eddie Marcel, to whom the house owed, and gladly paid in laughing tribute, a deep debt of gratitude for full enjoyment and understanding of the show. The artistic blend of character comedy and compering made him a lifelong friend of all patrons. In a cabaret interlude featuring diversified comedy, Connie Graham, with Hal Scott in support, amusingly burlesqued prima donnas and client film actresses, and brought the house down with her dramatic realism in the Tom-cat's 'Midnight Love Song.' Tommy Russell fiddled to nonsensical piano-accordion accompaniments by Ernie Marconi in spasms of original musical comedy. It was a memorable night of fun and glamorous skating highlights, enhanced by capable and inspiring orchestration." 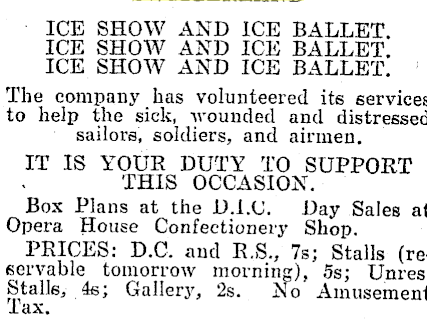 The show ran nightly with matinee shows on Wednesdays and Saturdays with a twist no one was expecting. Although Megan and Phil Taylor were the headliners of "Switzerland", they were nearly upstaged by Egbert The Educated Horse, played by Ronald Priestley and Eddie Marcel. The crowd just went berserk over the two-man skating horse, cheering him loudly and even yelling for encores. The next day, the newspaper raved, "Egbert is a 'property' horse who has to be seen to believed; he rolls his eyes, blows smoke through his nostrils, and in moments of emotion weeps copiously." 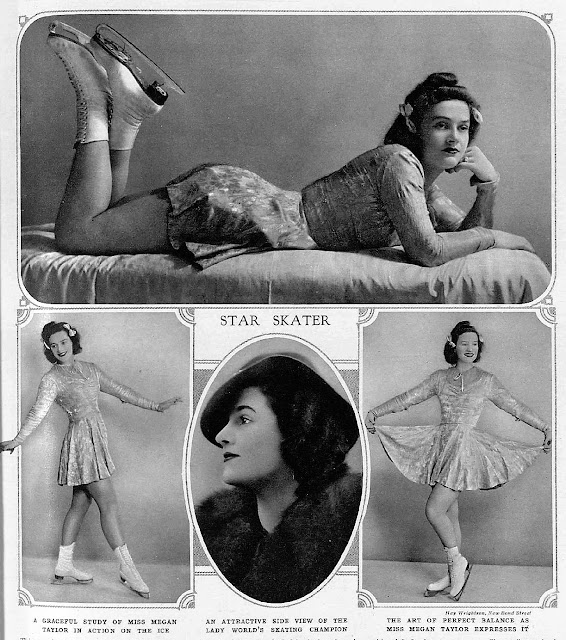 So well received was the show at Her Majesty's Theatre that The Williamson Theatre Company decided to take "Switzerland" on the road. The Taylor's, Elsie Heathcote and of course, Egbert The Educated Horse, received nightly standing ovations for over a month at the The Grand Opera House in Wellington, where 'house full' cards had to be displayed outside the theatre before both matinee and evening performances.
From there, the cast went to Christchurch, where Megan Taylor was honoured by the New Zealand Roller Skating Association at a special reception in her honour. After shows at the Theatre Royal in Hamilton, "Switzerland" returned to His Majesty's Theatre in Auckland for an encore performance. On April 29, 1940, "The Auckland Star" raved that "applause and laughter such as has rarely been heard in His Majesty's Theatre rocked the venerable building to its foundations... Of the capacity house, at least half must have seen the show when it was here at Christmas - it is known that one patron had seen it no fewer than nine times - and so members of the company were welcomed back as old friends... Where would they all have been if it had not been for Marcel? Marcel, valiantly coming to the footlights to announce each turn with inimitable patter, although his feet showed a marked disposition to tie themselves in knots, and his 'educated' horse Egbert, who seemed to forget its training or leave the ground altogether."

With a portion of the proceeds donated to the Sick And Wounded War Fund, this unexpected hit inspired a series of popular wartime ice shows in New Zealand that distracted the fine folks of the country from the tumult and horror of the Pacific theater of war. Through the imagination of McKenzie and the J.C. Williamson Company, Kiwis could go to the theatre every night and be transported to neutral Switzerland, a safe place where skating reigned supreme and everyone was happy... especially Egbert The Educated Horse.

Skate Guard is a blog dedicated to preserving the rich, colourful and fascinating history of figure skating. Over ten years, the blog has featured over a thousand free articles covering all aspects of the sport's history, as well as four compelling in-depth features. To read the latest articles, follow the blog on Facebook, Twitter, Pinterest and YouTube. If you enjoy Skate Guard, please show your support for this archive by ordering a copy of the figure skating reference books "The Almanac of Canadian Figure Skating", "Technical Merit: A History of Figure Skating Jumps" and "A Bibliography of Figure Skating": https://skateguard1.blogspot.com/p/buy-book.html.
Posted by Skate Guard Blog at October 22, 2020
Email ThisBlogThis!Share to TwitterShare to FacebookShare to Pinterest
Newer Post Older Post Home