From Selchow To The Triple 'Axle': Vintage Skating Games And Toys 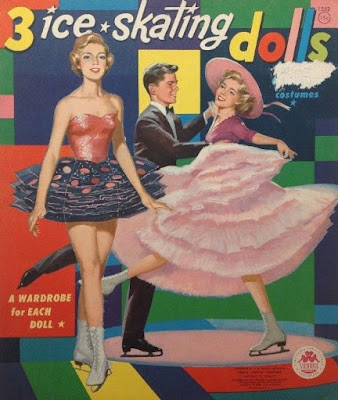 As if footing the bill for their children's ice time, lessons and costumes wasn't expensive enough, parents have long had to contend with the expense of the annual visit from Santa Claus. And guess what? Their precious little angels weren't only expecting a new pair of skates under the tree. They wanted the latest skating games and toys as well! 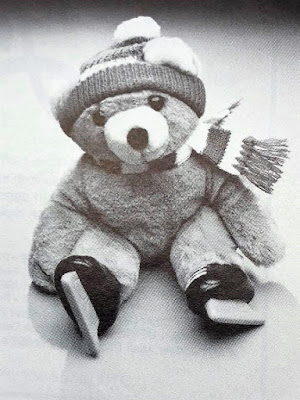 In 1900, the Bay Shore, New York game manufacturers H.B. Chaffee & E.G. Selchow produced what was perhaps the first skating themed board game, entitled The Skating Race Game. The company (best known for coming up with Scrabble, Parcheesi and a knock-off of Clue called Whodunit) was founded in 1867 and no... there was no relation to Ulrich Salchow, although it's a pretty neat little coincidence. The Skating Race Game was a typical 'goose game' where players rolled the die, moved around the board and were sent forward or back if they landed on certain obstacles. 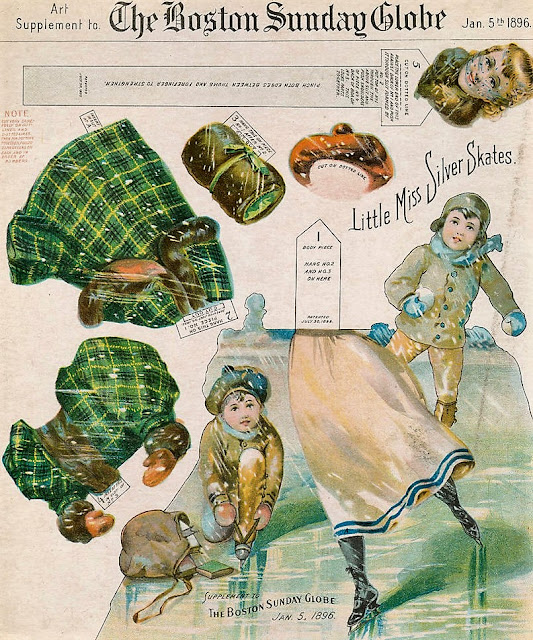 Paper dolls of skaters predated Chaffee and Selchow's board game by several years. In the art supplement of the January 5, 1896 edition of "The Boston Sunday Globe", a colourized paper doll entitled Little Miss Silver Skates was a charming precursor to countless other paper dolls that would appear in the decades that followed. 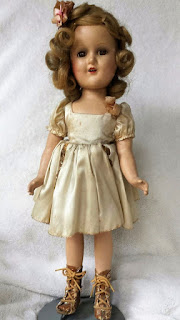 Though skating paper dolls had a certain charm, they failed to have the same popularity as the 'real deal'. Barbara Ann Scott and Sonja Henie composition dolls were hot commodities in the forties and fifties, and countless skating Barbie dolls have appeared on department store shelve. Surprisingly, skating-themed jigsaw puzzles, such Lee Olney's "The Skaters", enjoyed almost the same commercial success that dolls did. 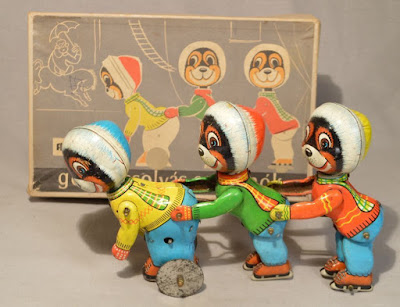 In the sixties, a Japanese toy company called T.P.S. (Tokyo Plaything Shokai) came up with a wind-up trio of skating bears. A Hungarian toy company called Lemezárugyár Budapest 'borrowed' the idea and mass producing them. This toy was marked internationally the Champ On Ice Bear Skater Trio and was hugely popular in Europe. The concept for a wind-up skating toy wasn't a new one - similar toys with roller skates had been around for decades.


Chicago based D. Gottlieb and Co.'s Ice-Revue pinball machine came out in 1965, just in time for those pre-Christmas trips to the arcade. 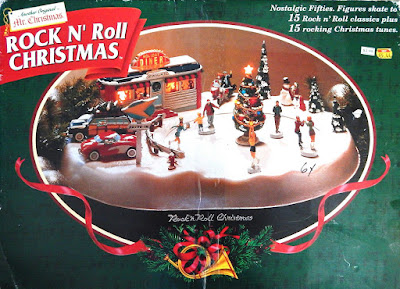 Two years prior, John Joslyn of New York's Luehland Company was granted a patent for a 'magnetic skating pond' game, where the player had to move a bug through a maze of traps to the freedom of a skating pond. Joslyn's skating pond paled in comparison to the much more elaborate Mr. Christmas skating ponds which Sears offered in its Wish Book in the nineties. The latter ponds, which came in themes ranging from Victorian to Rock N' Roll, each had an animated and lighted display and played thirty to fifty songs. 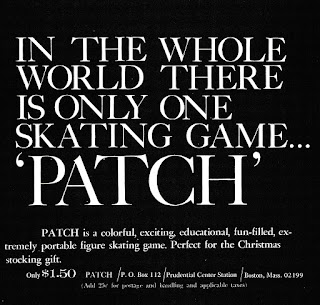 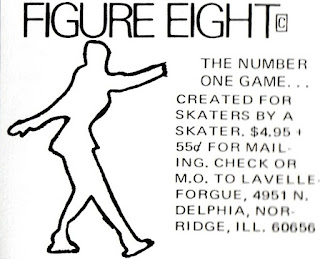 A trio of charmingly obscure games made 'by skaters, for skaters' appeared in the late sixties, early seventies, and mid nineties, respectively. The first, "Patch", was manufactured in Boston and was billed as a "colourful, exciting, educational, fun-filled an extremely portable game" for ages eight through eigty. "Figure Eight", which like "Patch" was sold via mail order, appeared not long after. The third, a card game called "Silly Skating", was produced by Foy's Toys in Las Vegas. 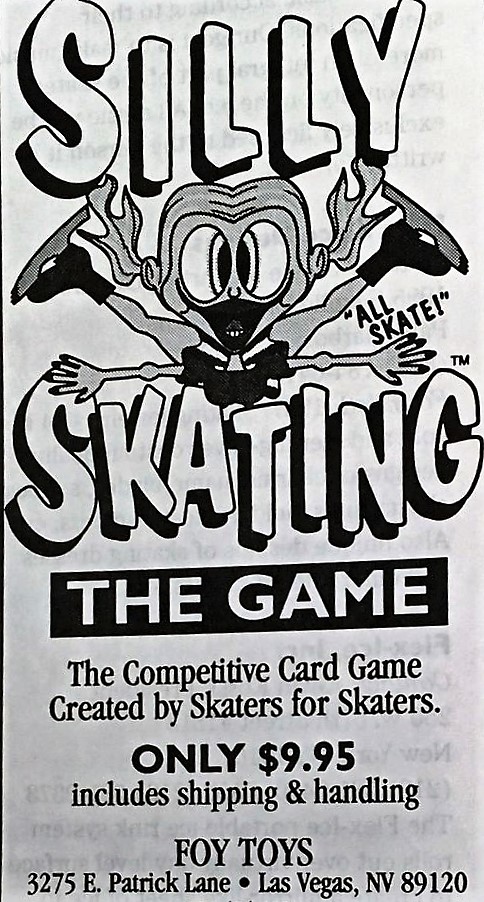 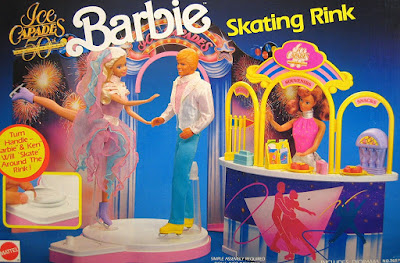 The popularity of these games and toys paled in comparison to the Barbie Skating Rink, which was released by Mattel in 1990 in conjunction with the fiftieth anniversary of the Ice Capades. It was definitely a step up from Playskool's Smurfette skating puzzle, which skating-loving children who grew up in that era would have likely already had kicking around in their toy box underneath a few Mr. Potato Head's, a Teddy Ruxpin doll and a My Little Pony.

To this very day, you needn't look further than ye olde App Store to find a whole host of dreadful skating-themed electronic games. Long before the whole world had the internet in their pockets, Epyx developed "Winter Games" on floppy disc for Commodore 64 in 1985. It was a follow-up to the highly popular "Summer Games", released the year earlier. By 1989, two hundred and fifty thousand copies of "Winter Games" had been sold and it had been released for Amiga, Atari and Nintendo. In the game, players used a combination of keystrokes to perform a series of elements including a triple Lutz, camel spin and triple 'Axle'.
The best part about "Winter Games" and it's triple 'Axle' was that you could make history every time you played. The character in the game you were controlling was female and no woman had performed a triple Axel in the Olympic Games at that point. Midori Ito had that honour at the 1992 Games in Albertville.


In the age of online shopping, vintage skating dolls, puzzles and games have become surprisingly collectible, so if you're looking for a truly unique gift for that figure skater in your life who has everything, looking back in time may just be your answer.

Skate Guard is a blog dedicated to preserving the rich, colourful and fascinating history of figure skating. Over ten years, the blog has featured over a thousand free articles covering all aspects of the sport's history, as well as four compelling in-depth features. To read the latest articles, follow the blog on Facebook, Twitter, Pinterest and YouTube. If you enjoy Skate Guard, please show your support for this archive by ordering a copy of figure skating reference books "The Almanac of Canadian Figure Skating", "Technical Merit: A History of Figure Skating Jumps" and "A Bibliography of Figure Skating": https://skateguard1.blogspot.com/p/buy-book.html.
Posted by Skate Guard Blog at December 01, 2022
Email ThisBlogThis!Share to TwitterShare to FacebookShare to Pinterest
Newer Post Older Post Home