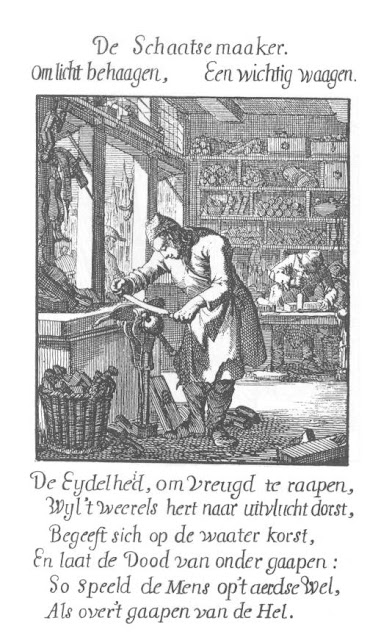 "Holland may certainly be called the skater's paradise." - C.G. Tebbutt

Published in 1694 by seventeenth century Dutch poet, illustrator and engraver Johannes 'Jan' Luyken of Amsterdam and his son Caspar, "Het Menselyk Bedryf" (loosely translated as "The Book of Trades") was a book of one hundred engravings, each depicting various trades in Amsterdam during the Dutch Golden Age. From the Vleeshouwer, the backer to the kaarsemaaker (butcher, baker, candle maker), each engraving was paired with a moralistic verse. The thirty-fourth of the engravings was "Schaatsemaaker" - 'the skate-maker' in english. The moralistic verse accompanying "Schaatsemaaker" was as follows:

The verse speaks of finding joy in moving over the 'water crust' and evading death below in the gap of hell. In her 1983 essay "Dutch prints of daily life: mirrors of life or masks of morals?", Linda A. Stone-Ferrier of the Helen Foresman Spencer Museum of Art interprets proverbs such as Luyken's from the period thusly: "Sixteenth- and seventeenth-century proverbs, such as 'the world moves on skates' also related the misfortunes of life to the perils of skating... Jan Luyken wrote a poem about the pleasures of skating, but also discussed skating as a symbol of mortality."

The contributions of the Dutch to skating's early history in Europe are countless. Hexham's "English And Netherduytch Dictionarie", published in 1648, mentioned skating in Holland. Eminent skating historian Nigel Brown noted in his 1959 book "Ice-Skating: A History" that "well before the middle of the seventeenth century ice-skating had become an important recreation in Holland. Several notable Dutch painters turned to the frozen ponds for inspiration. Life there was colourful and gay. It was practised by every class of society, from the simple peasant to the princes themselves... While speed would be the main preoccupation of the peasants hurrying to the market over the frozen canals to sell their wares, of the youths challenged to race their nearest companion, and of the soldier whose duty it was to move faster than the enemy, it would not have had the same necessity to the nobleman. Le grand siecle had just begun. Refinement and grace were a nobleman's passport. Exaggerated speed on ice, and the manner of performing it would appear vulgar to him. To his refined tastes it was an exercise of no appeal. The influence of elegance and good manners cannot be overestimated when following the early development of skating. It was this aristocratic interest which laid the foundation-stone of artistic skating. Sliding over the ice in an elegant fashion, listing over in a Dutch roll, gliding over the glistening surface balancing one foot behind like a graceful dancer had an irresistable attraction." 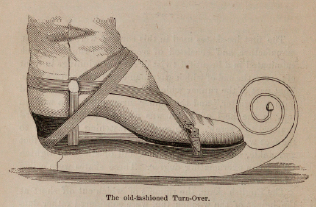 In seventeenth century Holland, a Schaatsemaaker was considered a noble profession. Skate-making was considered a specialized trade. The orders for iron and steel blades that skaters would strap onto their shoes would have been placed at a frenetic pace and work of the first quality would have been expected. Without those iron and steel blades, the Dutch would have never introduced the Dutch Roll, it never would have made it back to Great Britain and the trajectory of skating history would have been changed forever. Luyken's ode to the Schaatsemaaker was a depiction of how important skating was in Holland at the time and serves, in present day, as a reminder of just how paramount the Dutch were in the sport's early development. A copy of Luyken's "Schaatsemaaker" engraving can be found at the World Figure Skating Hall Of Fame in Colorado Springs, donated as part of the Grafström collection.

Skate Guard is a blog dedicated to preserving the rich, colourful and fascinating history of figure skating and archives hundreds of compelling features and interviews in a searchable format for readers worldwide. Though there never has been nor will there be a charge for access to these resources, you taking the time to 'like' on the blog's Facebook page at http://www.facebook.com/SkateGuard would be so very much appreciated. Already 'liking'? Consider sharing this feature for others via social media. It would make all the difference in the blog reaching a wider audience. Have a question or comment regarding anything you have read here or have a suggestion for a topic related to figure skating history you would like to see covered? I'd love to hear from you! Learn the many ways you can reach out at http://skateguard1.blogspot.ca/p/contact.html.
Posted by Skate Guard Blog at July 08, 2021
Email ThisBlogThis!Share to TwitterShare to FacebookShare to Pinterest
Newer Post Older Post Home
"As a rule an author has one or two popular ways of contrasting the past with the present. He can treat the past as lying in comparative doleful ignorance, or he can explain that the past was infinitely superior to the day we live in. Of course, either method is the popular journalism of the moment, and in reality there is no sharp contrast, but a gradual transition which leads the past into the present." - Joel B. Liberman, Skating Club Of New York