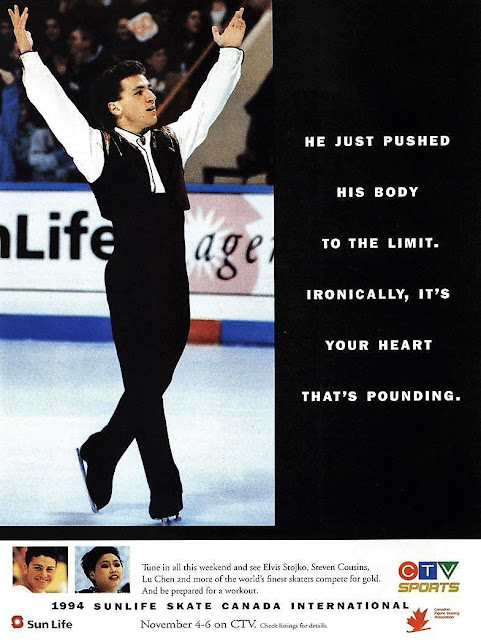 From November 3 to 6, 1994, an international cast of skaters from fifteen countries gathered at the Centrium Arena in Red Deer, Alberta for the 1994 Skate Canada International competition. The event boasted seven and a half hours of coverage on CTV. Ticket prices ranged from twenty two to thirty two dollars, with the free skating finals playing to a packed house.

Though the competition offered a total purse of one hundred thousand dollars in prize money, the winners in singles 'only' received five thousand. One reporter speculated that France's Philippe Candeloro, who withdrew from the event with no explanation provided, did so because the prize money at Skate America was higher.

Incidentally, it was the final year that Skate Canada was held as a standalone event. In 1995, the event was first included in the Champions Series - now called the Grand Prix. It was during Skate Canada that David Dore of the CFSA first announced discussions to "combine Skate Canada and Skate America into a two-event championship... [called] North American Skate with combined prize money... We plan to increase the Skate Canada prize money, anyway, but if we combined our prizes together with the U.S. payout, it would be a good purse that could attract good fields. It also would eliminate competition for skaters."

Just as the prize money being offered at professional competitions enticed skaters to leave the amateur ranks behind, the pressure for skating federations to offer big bucks at amateur international events was already becoming 'a thing'. Let's take a look back at how the competition unfolded!

During the off-season, twenty year old Kristy Sargeant and twenty four year old Kris Wirtz spent a couple of weeks training with Igor Moskvin in St. Petersburg, Russia. They couldn't wait to get home to their training base in Brossard, Quebec. Kris Wirtz told reporter Cam Cole, "The things people don't have there is frightening. There was a woman at the end of our street, I could see the bones through the skin of her legs. Her face was black from exposure. I don't understand how they live. They have to be such strong people. I mean, I will work with Igor again... just not in those conditions. We were so out of our element, we couldn't concentrate on the things we went over there for.''

In the warm-up for the pairs short program, America skater Cheryl Marker collided with Kris Wirtz. Her shoulder smashed into his ribs, but he decided to compete anyway. Kristy Sargaent tumbled on the side-by-side triple toe-loop in their program, but the Canadians were still second heading into the free skate.

Kristy Sargeant and Kris Wirtz managed to score their first major international victory in Red Deer - the city where Sargeant was born - skating a strong program that was only marred by a faulty death spiral. After the event, Sargeant told reporters, "Winning our first international event is very big for us because it shows that we have a chance to be on the ladder towards the next Olympics. Our skating was a little rough, but we executed the things we were trying to do up until the last little problem.'' The silver medal went to Latvia's Elena Berezhnaya and Oleg Shliakhov and the bronze to crowd favourites Sarah Abitbol and Stéphane Bernadis of France. Danielle Carr of Australia, who finished fifth with her brother Stephen, celebrated her twenty fifth birthday in Red Deer.

Germany's Marina Kielmann, ranked fourth in the world, was the favourite entering the competition after the withdrawal of China's Lu Chen. However, she tumbled twice in the short program, taking herself out of the running for the gold medal. France's Laetitia Hubert rose to the occasion, delivering a strong performance to René Duprée's "Tango" from "Cirque du Soleil" and taking top spot after the short program. She was working with Evy and Mary Scotland down in the United States at the time.


In the free skate, Laetitia Hubert faltered and Marina Kielmann rallied but it was fifteen year old Krisztina Czakó of Hungary who rose to the occasion and snatched the gold medal over Hubert and Chicago's Jessica Mills. Czakó was six weeks shy of her sixteenth birthday,


Czakó was the youngest woman in Red Deer. She tried eight triples, including a triple/triple combination, and landed six. All but the Canadian judge, who had her fourth, placed her first overall. Czakó had arrived in Red Deer with an unusual quandary. The hem on one of her dresses was too long and she almost had to skate in a costume donated by the Red Deer Figure Skating Club. She eventually found suitable dresses in a skating boutique. Canada's two entries, Angela Derochie and Jennifer Robinson, placed fifth and sixth. Robinson had been a last-minute replacement for an injured Susan Humphreys.

Taking an early lead in the compulsories, Canadian Champions Shae-Lynn Bourne and Victor Kraatz dominated the ice dance event in Red Deer from start to finish, easily besting Lithuanians Margarita Drobiazko and Povilas Vanagas and Americans Renée Roca and Gorsha Sur. Bourne and Kraatz received marks ranging from 5.4 to 5.7 for their winning free dance, a credit to their new coaches Marina Klimova and Sergei Ponomarenko. The Canadians had recently made the move to Lake Arrowhead to work with the Olympic Gold Medallists. They also worked with choreographer Uschi Keszler. Bourne told reporters, "With Marina and Sergei, everyone is going to be involved. Everyone's working toward the same thing. They're helping us to grow and become adults. Like a flower blossoms, we're going to blossom.'' Canada' second team, Jennifer Boyce and Michel Brunet, placed fifth of the eleven couples entered. 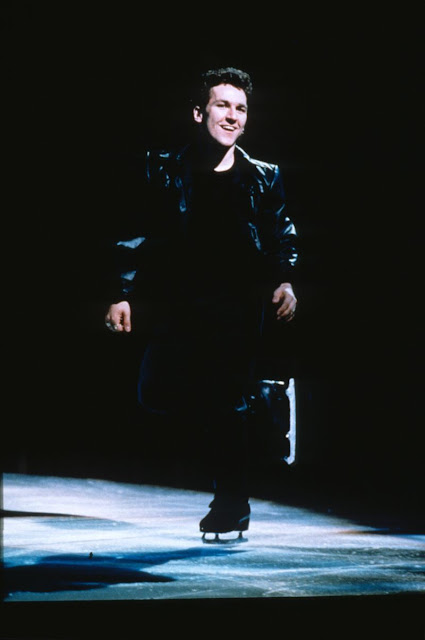 Ticket buyers who had been anticipating a showdown between Elvis Stojko and Philippe Candeloro may have been disappointed, but Stojko more than gave them their money's worth, even if his competition wasn't as stiff. The twenty two year old had performed his new free skate to "1492: Conquest Of Paradise" every night on his Tour Of Champions, but had ditched a short program that wasn't working over the summer in favour of a new program to music from "Total Recall". He landed a triple Axel/double toe-loop, double Lutz and double Axel to take the lead in the short. His marks ranged from 5.5 to 5.9. He earned marks ranging from 5.7 to 5.9 for his "1492" free skate, landing six triples; two in combination. He tried the quad but just missed it. He told reporters, "There's still a lot left in the program. I left out some things, like the triple/triple combination, the quad-triple combination, and a second quad I want to put in and there's a lot of in-between's I want to improve on.'' Sébastien Britten landed five triples to take the bronze, just behind Michael Shmerkin, who made history as the first Israeli skater to win a medal at Skate Canada. Canada's third entry, a young Jeffrey Langdon, placed tenth.


Thanks to a generous donation of VHS tapes by Skate Guard reader Kate, you can take a trip back in time and rewatch the gala from the 1994 Skate Canada International competition in digitized video form. The YouTube playlist can be found above or at https://www.youtube.com/playlist?list=PL6c_NN6KdCfJpMkd7HMpTpuc5GlZIpNx6.

Skate Guard is a blog dedicated to preserving the rich, colourful and fascinating history of figure skating and archives hundreds of compelling features and interviews in a searchable format for readers worldwide. Though there never has been nor will there be a charge for access to these resources, you taking the time to 'like' the blog's Facebook page at http://www.facebook.com/SkateGuard would be so very much appreciated. Already 'liking'? Consider sharing this feature for others via social media. It would make all the difference in the blog reaching a wider audience. Have a question or comment regarding anything you have read here? Have a suggestion for a topic related to figure skating history you would like to see covered? I'd love to hear from you! Learn the many ways you can reach out at http://skateguard1.blogspot.ca/p/contact.html.
Posted by Skate Guard Blog at October 24, 2019
Email ThisBlogThis!Share to TwitterShare to FacebookShare to Pinterest
Newer Post Older Post Home
"As a rule an author has one or two popular ways of contrasting the past with the present. He can treat the past as lying in comparative doleful ignorance, or he can explain that the past was infinitely superior to the day we live in. Of course, either method is the popular journalism of the moment, and in reality there is no sharp contrast, but a gradual transition which leads the past into the present." - Joel B. Liberman, Skating Club Of New York