Henie Does The Hula 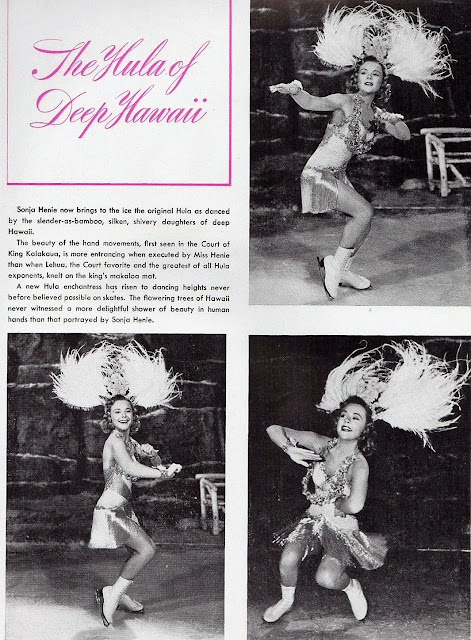 "Hula is the language of the heart." - King David Kalākaua

After finishing a grueling tour with her Hollywood Ice Revue in 1940, Sonja Henie checked into the Royal Hawaiian Tour hotel on Waikiki Beach in Honolulu, Hawaii for some much needed rest, relaxation and romance before beginning production on her next film, the smash hit "Sun Valley Serenade". While on the island, Sonja went to go see a performance of Hilo Hattie, a chanteuse and hula dancer who was known as 'the Polynesian Sophie Tucker'. 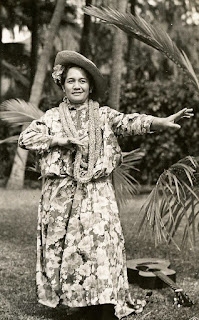 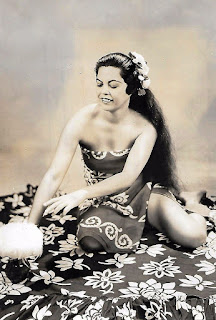 After the show, an impressed Sonja convinced Hilo Hattie to fly out to Hollywood and teach her elements of her dances beside her swimming pool at her Delfern Drive mansion. It wasn't long before Sonja transformed the Hula to the ice. Because a second opinion is always a good thing, she enlisted further help from Aggie Leilehua Auld, a Hawaiian hula dancer who appeared in the 1938 film "Hawaii Calls". 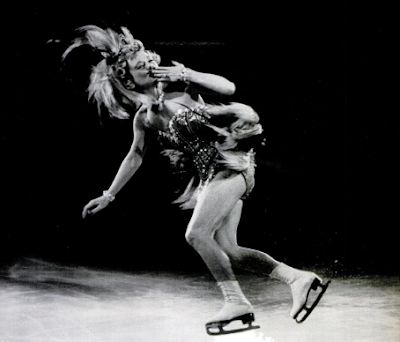 The Hula soon became one of Sonja's signature acts in her Hollywood Ice Revue. In fact, she developed four different Hula production acts over the years. She weaved her through "Sweet Leilani" from Bing Crosby's film "Waikiki Wedding", the Ulili Hula Chant and Frances Langford's "Lovely Hula Hands"... and 'borrowed' Hilo Hattie's own signature "Hilo Hattie Does The Hilo Hop" for good measure. As an encore, she often performed to the Hawaiian standard "Little Brown Gal". 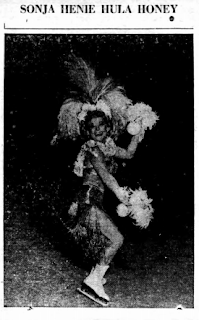 The Hula made an appearance in Sonja's 1942 film "Iceland"... and in a Quonset hut in New Brunswick. In the latter show, it was so cold she had to perform it wearing a giant Norwegian sweater. Audiences and critics alike raved about Sonja's Hula. In the December 17, 1941 issue of the "Buffalo Courier Express", Anne M. McIlhenney remarked, "The hula number is something to rouse a beauty-lover with delight. In it, Sonja dances with her hands. Yes. dances. She waves those beautiful doll-like hands like a hula dancer does hen hips, creating an illusion of swaying dancers of the tropics that is paralyzing in its sheer beauty. You could have heard a feather drop last night when the star finished this dance. The silence, thrilling in its impressive tribute, was broken by waves of applause - insistent in demanding an encore. Sonja obliged and those who were able to tear their fascinated eyes from her hands became aware of the perfect timing of her skating and of the difficult pattern she wove with her flashing blades." 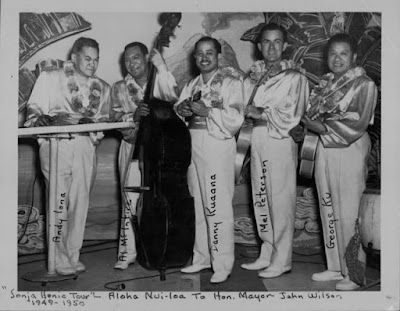 When Sonja performed her Hula numbers, she often had Hawaiian singers and orchestras accompany her... and was carried in on a giant canoe or float covered in flowers. Sonja was so 'Hula crazy' that when she and husband Winthrop Gardiner threw a summer kick-off dinner-dance for Hollywood's elite in 1951, she entertained guests with her 'very own' Hawaiian orchestra and a troupe of Hula dancers she imported from Hawaii. Among her guests at this black-tie soiree were Mrs. Louis B. Mayer, Marion Davies, Barbara Stanwyck, Kirk Douglas, Nancy Sinatra, Ann Sheridan and her old beau Tyrone Power.


While Henie's Hula might seem hokey to some in hindsight, you have to remember that Tiki culture was becoming hugely popular during her era. Don the Beachcomer's restaurant in Hollywood introduced Californians to Americanized inventions of 'authentic Hawaiian food and drink' like the pu-pu platter, Mai Tai, mahi mahi and Kalanianoli - a rum and fruit juice cocktail served in a pineapple - and Eleanor Powell performed the Hula in the 1939 MGM film "Honolulu". In the forties, a franchise chain of Polynesian style restaurants called Trader Vic's was born.


Though some have argued that Sonja's Hula dance was an act of cultural appropriation, in her time it was simply the 'in thing' to do... and like everything, she gave it one hundred percent.

Skate Guard is a blog dedicated to preserving the rich, colourful and fascinating history of figure skating and archives hundreds of compelling features and interviews in a searchable format for readers worldwide. Though there never has been nor will there be a charge for access to these resources, you taking the time to 'like' on the blog's Facebook page at http://www.facebook.com/SkateGuard would be so very much appreciated. Already 'liking'? Consider sharing this feature for others via social media. It would make all the difference in the blog reaching a wider audience. Have a question or comment regarding anything you have read here or have a suggestion for a topic related to figure skating history you would like to see covered? I'd love to hear from you! Learn the many ways you can reach out at http://skateguard1.blogspot.ca/p/contact.html.j
Posted by Skate Guard Blog at December 10, 2019
Email ThisBlogThis!Share to TwitterShare to FacebookShare to Pinterest
Newer Post Older Post Home