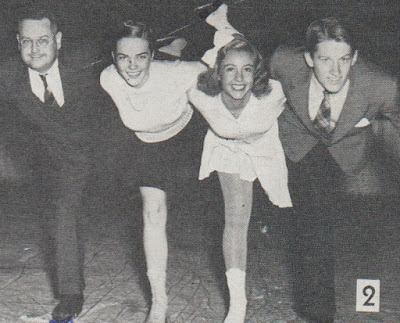 The skating world lost a true gem when Benjamin T. Wright passed away on November 30, 2019. He was not only an ISU Referee and Judge, USFSA President and chairman of the ISU Technical Committee, but one of the sport's most passionate historians. Without his kind and patient support behind the scenes, Skate Guard wouldn't exist... and that's no overstatement. Until just a few months ago, we had long conversations on the phone regularly and he'd often go digging to find just the information I needed. Many of the stories he helped me with with haven't even been published yet.

Benjamin was a fountain of knowledge. His two thorough and fascinating books on skating history are must haves. He was a man of strong opinions who told it like it was - championing the efforts of skaters and officials who left the sport better than they found it and frankly discussing the ones he felt hadn't. He was there when Dick Button performed the first triple loop and fondly recalled his good friend Cecilia Colledge, who coached in Boston for many years and once lived in the same retirement community he did. 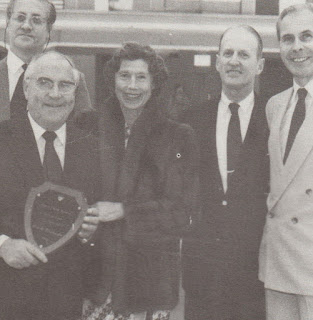 The very first test Benjamin ever judged was a 5th Figure Test, when he was barely twenty. The other two judges, James Tower and Thomas Vinson (Maribel Vinson Owen's father) were in their eighties. He continued to judge dance tests well into his nineties. He felt that the retirement age for ISU officials was too young. If someone still wanted to contribute to the sport, they shouldn't be forced out the door.

Though Benjamin often said he suffered from 'Rodney Dangerfield syndrome' - he didn't "get no respect" - he cared much more about his late wife Mary Louise receiving the credit he never felt she was given than getting a pat on the back himself. Mary Louise was a U.S. Champion in fours skating and judged dance at the World Championships twelve times. He remembered, "I had great respect for her. She made me a better judge and referee... She could take a novice class with twenty five in it, under the old judging system and she'd get it one through twenty five. People would say to her, 'Well, how did you do that?' and she'd say, 'I didn't do anything. I was just one of five judges!'"

Mary Louise and Benjamin were one of only two married couples to serve as skating officials at the same Olympics. He was a referee in Albertville in 1992; she judged dance. The other couple to do so was the Jakobsson's, way back in 1928. They never brought what happened at the rink home with them. "We never discussed her placings," he said. "I respected them. I thought they were right!"

Benjamin had a great respect for the The Skating Club Of Boston's rich skating tradition and had many wonderful stories about Maribel Vinson Owen, Theresa Weld Blanchard, Tenley Albright, Suzanne Davis, Joan Tozzer and skaters from Canada and all over the world who performed in carnivals there. He had grimmer stories too, like having replica trophies made for Gertrude Vinson in the aftermath of the Sabena Crash in 1961. 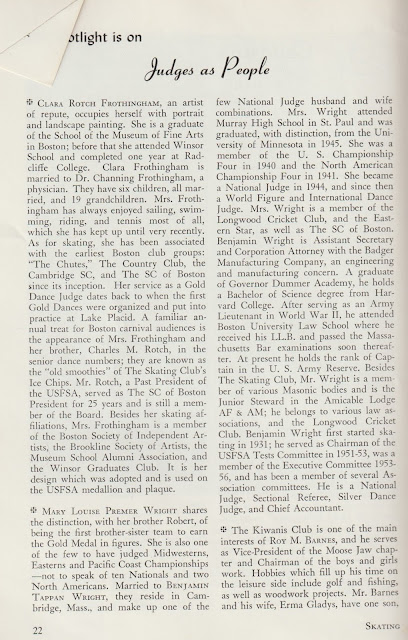 Two of my favourite stories Benjamin told were about John Curry and the early days of "Skating" magazine. He recalled, "When John Curry won [gold at the 1976 Olympics in Innsbruck], I said to him... 'John, you gotta go and defend the title that you just won at Worlds.' I said that to Dorothy as well. I said, 'If you don't do that, you're going to regret it for the rest of your life.' We had to go find him, he was on vacation someplace, and we got him to the Worlds and he won, and so did she... and I take full credit for that." In "Skating" magazine's early days, all of the photos and paperwork were kept in a bathtub and Theresa Weld Blanchard tasked him with going through it all and deciding what to keep and what to Marie Kondo. "Whatever I did, I had to make sure no one turned on the water," he laughed.


We can never 'turn the water on' skating's history. Skating's current incarnation is just a blip on a long and storied highway and unless we peer into the pavement cracks and challenge what we think we know, we'll never quite get a handle on the sport's complex evolution. It's now up to all of us to carry on Benjamin T. Wright's important work and trust me, he'd want it done right.

Skate Guard is a blog dedicated to preserving the rich, colourful and fascinating history of figure skating and archives hundreds of compelling features and interviews in a searchable format for readers worldwide. Though there never has been nor will there be a charge for access to these resources, you taking the time to 'like' the blog's Facebook page at http://www.facebook.com/SkateGuard would be so very much appreciated. Already 'liking'? Consider sharing this feature for others via social media. It would make all the difference in the blog reaching a wider audience. Have a question or comment regarding anything you have read here? Have a suggestion for a topic related to figure skating history you would like to see covered? I'd love to hear from you! Learn the many ways you can reach out at http://skateguard1.blogspot.ca/p/contact.html.
Posted by Skate Guard Blog at December 06, 2019
Email ThisBlogThis!Share to TwitterShare to FacebookShare to Pinterest
Newer Post Older Post Home